The physicist Sir Isaac Newton first developed this idea to get rough approximations for the impact depth for projectiles traveling at high velocities.

Newton's approximation for the impact depth

Newton's approximation for the impact depth for projectiles at high velocities is based only on momentum considerations. Nothing is said about where the impactor's kinetic energy goes, nor what happens to the momentum after the projectile is stopped.

This approach only holds for a blunt impactor (no aerodynamical shape) and a target material with no fibres (no cohesion), at least not at the impactor's speed. This is usually true if the impactor's speed is much higher than the speed of sound within the target material. At such high velocities, most materials start to behave like a fluid. It is then important that the projectile stay in a compact shape during impact (no spreading). 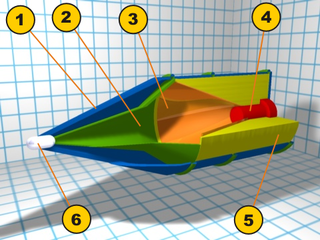 A shaped charge is an explosive charge shaped to focus the effect of the explosive's energy. Various types are used to cut and form metal, initiate nuclear weapons, penetrate armor, and perforate wells in the oil and gas industry. 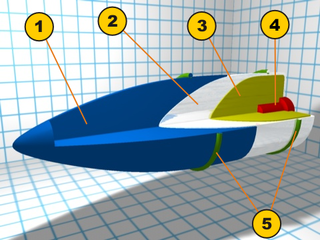 A projectile is any object thrown by the exertion of a force. It can also be defined as an object launched into the space and allowed to move free under the influence of gravity and air resistance.Although any object in motion through space may be called projectiles, they are commonly found in warfare and sports. Mathematical equations of motion are used to analyze projectile trajectories.

A bunker buster is a type of munition that is designed to penetrate hardened targets or targets buried deep underground, such as military bunkers.

Terminal ballistics, a sub-field of ballistics, is the study of the behavior and effects of a projectile when it hits and transfers its energy to a target. Bullet design and the velocity of impact largely determine the effectiveness of its impact. 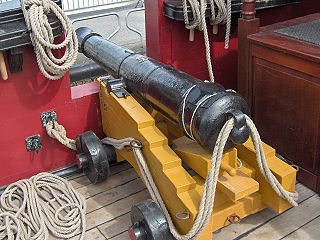 Recoil is the rearward thrust generated when a gun is being discharged. In technical terms, the recoil is a result of conservation of momentum, as according to Newton's third law the force required to accelerate something will evoke an equal but opposite reactional force, which means the forward momentum gained by the projectile and exhaust gases (ejecta) will be mathematically balanced out by an equal and opposite momentum exerted back upon the gun. In hand-held small arms, the recoil momentum will be eventually transferred to the ground, but will do so through the body of the shooter hence resulting in a noticeable impulse commonly referred to as a "kick".

High-explosive anti-tank (HEAT) is a type of shaped charge explosive that uses the Munroe effect to penetrate heavy armor. The warhead functions by having an explosive charge collapse a metal liner inside the warhead into a high-velocity superplastic jet; this superplastic jet is capable of penetrating armor steel to a depth of seven or more times the diameter of the charge. The jet's effect is purely kinetic in nature; the round has no explosive effect on the target.

A ricochet is a rebound, bounce, or skip off a surface, particularly in the case of a projectile. Most ricochets are caused by accident and while the force of the deflection decelerates the projectile, it can still be energetic and almost as dangerous as before the deflection. The possibility of ricochet is one of the reasons for the common firearms safety rule "Never shoot at a flat, hard surface." Ricochets can occur with any caliber, and short or round ricocheting bullets may not produce the audible whine caused by tumbling irregular shapes. Ricochets are a hazard of shooting because, for as long as they retain sufficient velocity, ricocheting bullets or bullet fragments may cause collateral damage to animals, objects, or even the person who fired the shot. 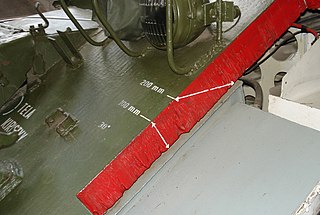 Sloped armour is armour that is neither in a vertical nor a horizontal position. Such "angled" armour is often mounted on tanks and other armoured fighting vehicles (AFVs), as well as naval vessels such as battleships and cruisers. Sloping an armour plate makes it harder to penetrate for antitank-weapons, such as armour-piercing shells and rockets, if they take a more or less horizontal path to their target, as is often the case. The better protection is caused by three main effects.

Armour-piercing discarding sabot (APDS) is a type of kinetic energy projectile fired from a rifled-barrel gun to attack armoured targets. APDS rounds are sabot rounds, firing a spin-stabilized armor penetrating sub-projectile, and were commonly used in large calibre tank guns, up until the early 1980s, but have now been superseded by armour-piercing fin-stabilized discarding sabot-tracer (APFSDS-T) projectiles used in smooth-bore guns, firing a fin-stabilized armor penetrating sub-projectile. However, APDS rounds are still commonly used in small or medium calibre weapon systems. For a given calibre, this type of ammunition can effectively double the armour penetration of a gun, compared to those firing armour-piercing (AP), armour-piercing, capped (APC), or armour-piercing, capped, ballistic capped (APCBC) projectiles. The saboted light armour penetrator (SLAP) concept applies this technology to small arms calibres.

Stopping power is the ability of a weapon – typically a ranged weapon such as a firearm – to cause a target to be incapacitated or immobilized. Stopping power contrasts with lethality in that it pertains only to a weapon's ability to make the target cease action, regardless of whether or not death ultimately occurs. Which ammunition cartridges have the greatest stopping power is a much debated topic.

Armor-piercing bullets for rifle and handgun cartridges are designed to penetrate ballistic armor and protective shields intended to stop or deflect conventional bullets. Although bullet design is an important factor with regard to armor penetration, the ability of any given projectile to penetrate ballistic armor increases with increasing velocity. Rifle cartridges typically discharge bullets at higher muzzle velocity than handgun cartridges due to larger propellant charge. However, even the same cartridge fired from a rifle will, in almost all common cases, have a higher velocity than when fired from a handgun. This is due to the longer period of acceleration available within the longer gun barrel of rifles, which allow adequate time for the propellant to fully ignite before the projectile exits the barrel. For this reason, bullets fired from rifles may be more capable of piercing armor than similar or identical bullets fired from handguns. In addition, a small-caliber bullet has higher sectional density than a larger-caliber bullet of the same weight, and thus more capable of defeating body armor.

A kinetic bombardment or a kinetic orbital strike is the hypothetical act of attacking a planetary surface with an inert projectile from orbit, where the destructive power comes from the kinetic energy of the projectile impacting at very high speeds. The concept originated during the Cold War. 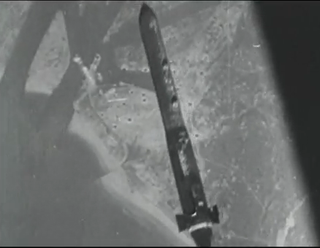 The Disney bomb, also known as the Disney Swish, officially the 4500 lb Concrete Piercing/Rocket Assisted bomb was a rocket-assisted bunker buster bomb developed during the Second World War by the British Royal Navy to penetrate hardened concrete targets, such as submarine pens, which could resist conventional free-fall bombs.