Last updated June 14, 2021
Not to be confused with Newton (unit), the SI unit of force.
Scale of temperature

The Newton scale is a temperature scale devised by Isaac Newton in 1701. [1] He called his device a "thermometer", but he did not use the term "temperature", speaking of "degrees of heat" (gradus caloris) instead. Newton's publication represents the first attempt to introduce an objective way of measuring (what would come to be called) temperature (alongside the Rømer scale published at nearly the same time). Newton likely developed his scale for practical use rather than for a theoretical interest in thermodynamics; he had been appointed Warden of the Mint in 1695, and Master of the Mint in 1699, and his interest in the melting points of metals are likely inspired by his duties in connection with the Royal Mint.

Newton used linseed oil as thermometric material and measured its change of volume against his reference points. He set as 0 on his scale "the heat of air in winter at which water begins to freeze" (Calor aeris hyberni ubi aqua incipit gelu rigescere), reminiscent of the standard of the modern Celsius scale (i.e. 0 °N = 0 °C), but he has no single second reference point; he does give the "heat at which water begins to boil" as 33, but this is not a defining reference; the values for body temperature and the freezing and boiling point of water suggest a conversion factor between the Newton and the Celsius scale of between about 3.08 (12 °N = 37 °C) and 3.03 (33 °N = 100 °C) but since the objectively verifiable reference points given result in irreconcilable data (especially for high temperatures), no unambiguous "conversion" between the scales is possible. [2]

The linseed thermometer could be used up to the melting point of tin. For higher temperatures, Newton used a "sufficiently thick piece of iron" that was heated until red-hot and then exposed to the wind. On this piece of iron, samples of metals and alloys were placed, which melted and then again solidified on cooling. Newton then determined the "degrees of heat" of these samples based on the solidification times, and tied this scale to the linseed one by measuring the melting point of tin in both systems. This second system of measurement led Newton to derive his law of convective heat transfer, also known as Newton's law of cooling.

In his publication, Newton gives 18 reference points (in addition to a range of meteorological air temperatures), which he labels by two systems, one in arithmetic progression and the other in geometric progression, as follows: 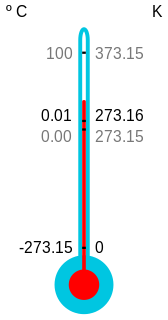 Absolute zero is the lowest limit of the thermodynamic temperature scale, a state at which the enthalpy and entropy of a cooled ideal gas reach their minimum value, taken as zero kelvins. The fundamental particles of nature have minimum vibrational motion, retaining only quantum mechanical, zero-point energy-induced particle motion. The theoretical temperature is determined by extrapolating the ideal gas law; by international agreement, absolute zero is taken as −273.15° on the Celsius scale, which equals −459.67° on the Fahrenheit scale. The corresponding Kelvin and Rankine temperature scales set their zero points at absolute zero by definition.

Anders Celsius was a Swedish astronomer, physicist and mathematician. He was professor of astronomy at Uppsala University from 1730 to 1744, but traveled from 1732 to 1735 visiting notable observatories in Germany, Italy and France. He founded the Uppsala Astronomical Observatory in 1741, and in 1742 proposed the Centigrade temperature scale which was later renamed Celsius in his honor.

Daniel Gabriel Fahrenheit FRS was a physicist, inventor, and scientific instrument maker. Fahrenheit was born in Danzig (Gdańsk), then a predominantly German-speaking city in the Pomeranian Voivodeship of the Polish–Lithuanian Commonwealth. He later moved to the Dutch Republic at age 15, where he spent the rest of his life (1701–1736) and was one of the notable figures in the Golden Age of Dutch science and technology. 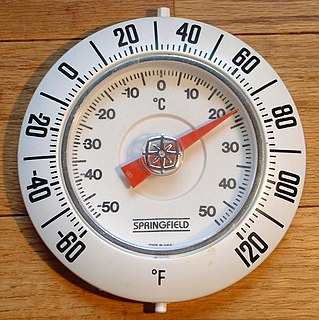 The Fahrenheit scale is a temperature scale based on one proposed in 1724 by the physicist Daniel Gabriel Fahrenheit (1686–1736). It uses the degree Fahrenheit as the unit. Several accounts of how he originally defined his scale exist, but the original paper suggests the lower defining point, 0 °F, was established as the freezing temperature of a solution of brine made from a mixture of water, ice, and ammonium chloride. The other limit established was his best estimate of the average human body temperature, originally set at 90 °F, then 96 °F. However, he noted a middle point of 32 °F, to be set to the temperature of ice water. 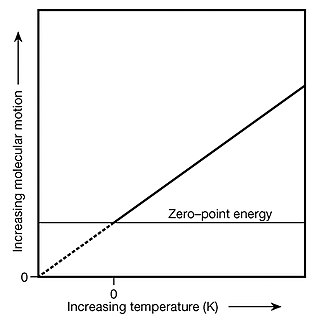 The following is a timeline of low-temperature technology and cryogenic technology. It also lists important milestones in thermometry, thermodynamics, statistical physics and calorimetry, that were crucial in development of low temperature systems.

The mercury-in-glass or mercury thermometer was invented by physicist Daniel Gabriel Fahrenheit in Amsterdam (1714). It consists of a bulb containing mercury attached to a glass tube of narrow diameter; the volume of mercury in the tube is much less than the volume in the bulb. The volume of mercury changes slightly with temperature; the small change in volume drives the narrow mercury column a relatively long way up the tube. The space above the mercury may be filled with nitrogen gas or it may be at less than atmospheric pressure, a partial vacuum. 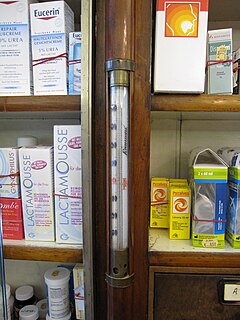 The Réaumur scale, also known as the "octogesimal division", is a temperature scale for which the freezing and boiling points of water are defined as 0 and 80 degrees respectively. The scale is named for René Antoine Ferchault de Réaumur, who first proposed a similar scale in 1730.

The Rømer scale, also known as Romer or Roemer, is a temperature scale named after the Danish astronomer Ole Christensen Rømer, who proposed it in 1701. It is based on the freezing point of pure water being 7.5 degrees and the boiling point of water as 60 degrees.

Temperature measurement describes the process of measuring a current local temperature for immediate or later evaluation. Datasets consisting of repeated standardized measurements can be used to assess temperature trends.

The Thiele tube, named after the German chemist Johannes Thiele, is a laboratory glassware designed to contain and heat an oil bath. Such a setup is commonly used in the determination of the melting point of a substance. The apparatus itself resembles a glass test tube with an attached handle. 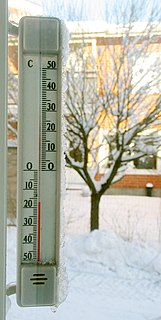 The Wedgwood scale (°W) is an obsolete temperature scale, which was used to measure temperatures above the boiling point of mercury of 356 °C (673 °F). The scale and associated measurement technique were proposed by the English potter Josiah Wedgwood in the 18th century. The measurement was based on the shrinking of clay when heated above red heat, and the shrinking was evaluated by comparing heated and unheated clay cylinders. The scale started at 1,077.5 °F (580.8 °C) being 0° Wedgwood and had 240 steps of 130 °F (54 °C). Both the origin and the step were later found inaccurate.

Jean-Pierre Christin was a French physicist, mathematician, astronomer and musician. His proposal in 1743 to reverse the Celsius thermometer scale was widely accepted and is still in use today.