Standing on the shoulders of giants

Last updated September 19, 2021
Stylistic device to acknowledge previous discoveries
For other uses, see Standing on the shoulders of giants (disambiguation) and On the Shoulders of Giants.

The phrase Standing on the shoulders of giants is a metaphor which means "Using the understanding gained by major thinkers who have gone before in order to make intellectual progress". [1]

It is a metaphor of dwarfs standing on the shoulders of giants (Latin : nanos gigantium humeris insidentes) and expresses the meaning of "discovering truth by building on previous discoveries". [2] This concept has been traced to the 12th century, attributed to Bernard of Chartres. Its most familiar expression in English is by Isaac Newton in 1675: "If I have seen further it is by standing on the shoulders of Giants." [3]

The attribution to Bernard of Chartres is due to John of Salisbury. In 1159, John wrote in his Metalogicon: "Bernard of Chartres used to compare us to dwarfs perched on the shoulders of giants. He pointed out that we see more and farther than our predecessors, not because we have keener vision or greater height, but because we are lifted up and borne aloft on their gigantic stature." [4] [5] However, according to Umberto Eco, the most ancient attestation of the phrase dates back to Priscian cited by Guillaume de Conches. [6]

According to medieval historian Richard William Southern, Bernard was comparing contemporary 12th century scholars to the ancient scholars of Greece and Rome: [7] A similar conceit also appears in a contemporary work on church history by Ordericus Vitalis. [8]

[The phrase] sums up the quality of the cathedral schools in the history of learning, and indeed characterizes the age which opened with Gerbert (950–1003) and Fulbert (960–1028) and closed in the first quarter of the 12th century with Peter Abelard. [The phrase] is not a great claim; neither, however, is it an example of abasement before the shrine of antiquity. It is a very shrewd and just remark, and the important and original point was the dwarf could see a little further than the giant. That this was possible was above all due to the cathedral schools with their lack of a well-rooted tradition and their freedom from a clearly defined routine of study.

The visual image (from Bernard of Chartres) appears in the stained glass of the south transept of Chartres Cathedral. The tall windows under the rose window show the four major prophets of the Hebrew Bible (Isaiah, Jeremiah, Ezekiel, and Daniel) as gigantic figures, and the four New Testament evangelists (Matthew, Mark, Luke, and John) as ordinary-size people sitting on their shoulders. The evangelists, though smaller, "see more" than the huge prophets (since they saw the Messiah about whom the prophets spoke).

Should Joshua the son of Nun endorse a mistaken position, I would reject it out of hand, I do not hesitate to express my opinion, regarding such matters in accordance with the modicum of intelligence allotted to me. I was never arrogant claiming "My Wisdom served me well". Instead I applied to myself the parable of the philosophers. For I heard the following from the philosophers, The wisest of the philosophers was asked: "We admit that our predecessors were wiser than we. At the same time we criticize their comments, often rejecting them and claiming that the truth rests with us. How is this possible?" The wise philosopher responded: "Who sees further a dwarf or a giant? Surely a giant for his eyes are situated at a higher level than those of the dwarf. But if the dwarf is placed on the shoulders of the giant who sees further? ... So too we are dwarfs astride the shoulders of giants. We master their wisdom and move beyond it. Due to their wisdom we grow wise and are able to say all that we say, but not because we are greater than they.

References during the sixteenth to nineteenth centuries

What Des-Cartes [ sic ] did was a good step. You have added much several ways, & especially in taking the colours of thin plates into philosophical consideration. If I have seen further it is by standing on the sholders [sic] of Giants.

This has recently been interpreted by a few writers as a sarcastic remark directed at Hooke's appearance. [11] Although Hooke was not of particularly short stature, he was of slight build and had been afflicted from his youth with a severe kyphosis. However, at this time Hooke and Newton were on good terms and had exchanged many letters in tones of mutual regard. Only later, when Robert Hooke criticized some of Newton's ideas regarding optics, was Newton so offended that he withdrew from public debate. The two men remained enemies until Hooke's death.

Diego de Estella took up the quotation in the 16th century; by the 17th century it had become commonplace. Robert Burton, in the second edition of The Anatomy of Melancholy (1624), quotes Stella thus:

I say with Didacus Stella, a dwarf standing on the shoulders of a giant may see farther than a giant himself.

Later editors of Burton misattributed the quotation to Lucan; in their hands Burton's attribution Didacus Stella, in luc 10, tom. ii "Didacus on the Gospel of Luke, chapter 10; volume 2" became a reference to Lucan's Pharsalia 2.10. No reference or allusion to the quotation is found there.

In 1634, Marin Mersenne quoted the expression in his Questions harmoniques:

Blaise Pascal, in the "Preface to the Treatise on the Vacuum" expresses the same idea, without talking about shoulders, but rather about the knowledge handed down to us by the ancients as steps that allow us to climb higher and see farther than they could:

Later in the 17th century, George Herbert, in his Jacula Prudentum (1651), wrote "A dwarf on a giant's shoulders sees farther of the two."

The dwarf sees farther than the giant, when he has the giant's shoulder to mount on.

Against this notion, Friedrich Nietzsche argues that a dwarf (the academic scholar) brings even the most sublime heights down to his level of understanding. In the section of Thus Spoke Zarathustra (1882) entitled "On the Vision and the Riddle", Zarathustra climbs to great heights with a dwarf on his shoulders to show him his greatest thought. Once there however, the dwarf fails to understand the profundity of the vision and Zarathustra reproaches him for "making things too easy on [him]self." If there is to be anything resembling "progress" in the history of philosophy, Nietzsche in "Philosophy in the Tragic Age of the Greeks" (1873) writes, it can only come from those rare giants among men, "each giant calling to his brother through the desolate intervals of time", an idea he got from Schopenhauer's work in Der handschriftliche Nachlass. [14] 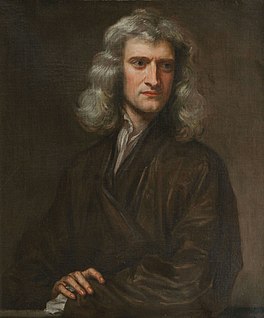 Sir Isaac Newton was an English mathematician, physicist, astronomer, theologian, and author who is widely recognised as one of the greatest mathematicians, physicists and most influential scientists of all time. His book Philosophiæ Naturalis Principia Mathematica, first published in 1687, established classical mechanics. Newton also made seminal contributions to optics, and shares credit with German mathematician Gottfried Wilhelm Leibniz for developing infinitesimal calculus. 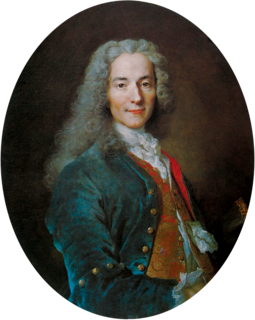 François-Marie Arouet, known by his nom de plumeVoltaire, was a French Enlightenment writer, historian, and philosopher famous for his wit, his criticism of Christianity—especially the Roman Catholic Church—as well as his advocacy of freedom of speech, freedom of religion, and separation of church and state. 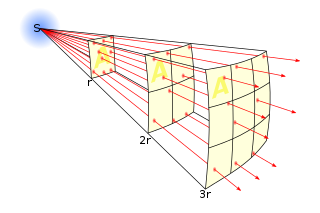 Michel Eyquem de Montaigne, also known as Lord of Montaigne, was one of the most significant philosophers of the French Renaissance. He is known for popularizing the essay as a literary genre. His work is noted for its merging of casual anecdotes and autobiography with intellectual insight. His massive volume Essais contains some of the most influential essays ever written. 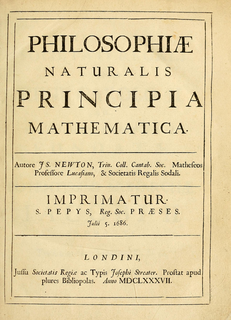 Philosophiæ Naturalis Principia Mathematica by Isaac Newton, often referred to as simply the Principia, is a work expounding Newton's laws of motion and the law of universal gravitation; in three books written in Latin, first published 5 July 1687. 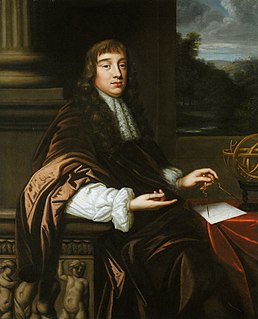 Robert Hooke FRS was an English polymath active as a scientist and architect, who, using a microscope, was the first to visualize a micro-organism. An impoverished scientific inquirer in young adulthood, he found wealth and esteem by performing over half of the architectural surveys after London's great fire of 1666. Hooke was also a member of the Royal Society and since 1662 was its curator of experiments. Hooke was also Professor of Geometry at Gresham College.

John of Salisbury, who described himself as Johannes Parvus, was an English author, philosopher, educationalist, diplomat and bishop of Chartres.

Bernard of Chartres was a twelfth-century French Neo-Platonist philosopher, scholar, and administrator. 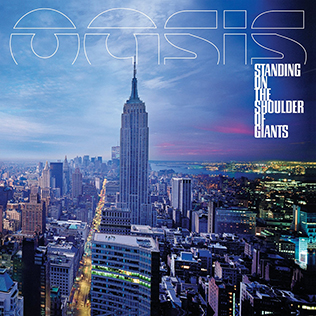 French personal pronouns reflect the person and number of their referent, and in the case of the third person, its gender as well. They also reflect the role they play in their clause: subject, direct object, indirect object, or other. 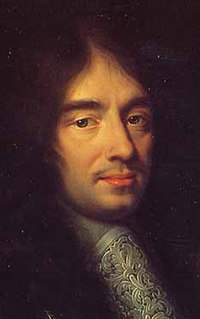 The quarrel of the Ancients and the Moderns began overtly as a literary and artistic debate that heated up in the early 17th century and shook the Académie française.

"Le Bruit et l'odeur" refers to a speech given in 1991 by Jacques Chirac, the Mayor of Paris who later became French president; it translates as "noise and smell."

In French, a verb is inflected to reflect its mood and tense, as well as to agree with its subject in person and number. Following the tradition of Latin grammar, the set of inflected forms of a French verb is called the verb's conjugation.

French pronouns are inflected to indicate their role in the sentence, as well as to reflect the person, gender, and number of their referents.

Georges Politzer was a French philosopher and Marxist theoretician of Hungarian Jewish origin, affectionately referred to by some as the "red-headed philosopher". He was a native of Oradea, a city in present-day Romania. 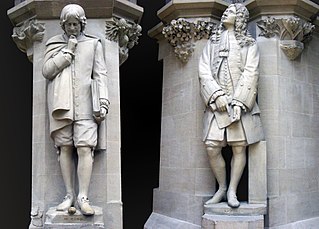 The "Chant du départ" is a revolutionary and war song written by Étienne Méhul (music) and Marie-Joseph Chénier (words) in 1794. It was the official anthem of the First Empire. 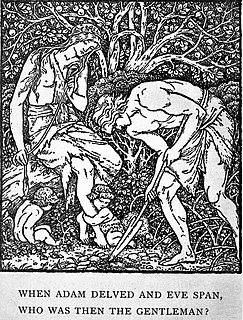 A Dream of John Ball (1888) is a novel by English author William Morris about the Great Revolt of 1381, conventionally called "the Peasants' Revolt". It features the rebel priest John Ball, who was accused of being a Lollard. He is famed for his question "When Adam delved and Eve span, who was then the gentleman?"