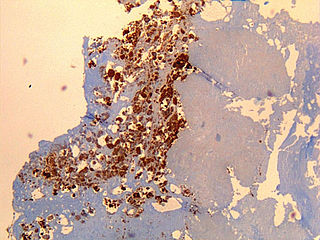 In mathematics, the distributive property of binary operations generalizes the distributive law from Boolean algebra and elementary algebra. In propositional logic, distribution refers to two valid rules of replacement. The rules allow one to reformulate conjunctions and disjunctions within logical proofs.

A vacuum flask is an insulating storage vessel that greatly lengthens the time over which its contents remain hotter or cooler than the flask's surroundings. Invented by Sir James Dewar in 1892, the vacuum flask consists of two flasks, placed one within the other and joined at the neck. The gap between the two flasks is partially evacuated of air, creating a near-vacuum which significantly reduces heat transfer by conduction or convection.

Quantitative genetics is a branch of population genetics that deals with phenotypes that vary continuously —as opposed to discretely identifiable phenotypes and gene-products.

Chromosome 6 is one of the 23 pairs of chromosomes in humans. People normally have two copies of this chromosome. Chromosome 6 spans more than 170 million base pairs and represents between 5.5 and 6% of the total DNA in cells. It contains the Major Histocompatibility Complex, which contains over 100 genes related to the immune response, and plays a vital role in organ transplantation.

The 2016 National Premier Soccer League season was the 104th season of FIFA-sanctioned soccer in the United States, and the 14th season of the NPSL.

Within contract bridge a stolen bid is a bid which usually lacks connection to the bidders own hand, and instead is used for blocking a certain bid to be expressed from the next opponent. To "steal a bid" is mainly done when the opponent to the right has given a conventional bid which the opponent to the left is likely to reply to. By far, most stolen bids are related to the Stayman convention. But also other conventions where some kind of reply is expected, the "reply range" can at least in theory be stolen. Blackwood is another example of a convention that might be exposed to a stolen bid.