Basketball at the 1952 Summer Olympics

Basketball at the 1952 Summer Olympics was the third appearance of the sport of basketball as an official Olympic medal event. 23 nations entered the competition.

The top six teams at the 1948 Summer Olympics qualified automatically, as did the winners of the 1950 FIBA World Championship (Argentina), the top two teams at the 1951 EuroBasket (USSR and Czechoslovakia), and the host country (Finland). Thirteen other nations competed in a preliminary round to determine the last six places in the sixteen-team Olympic tournament.

Nations that lost two games in the preliminary tournaments were eliminated. When there were only two teams left in each group, those teams advanced to the main tournament.

Bulgaria's victory earned it a berth in the main tournament, while Switzerland's second loss eliminated them.

The two teams that were 1–1 played each other: the winner received a tournament berth and the loser was eliminated.

The Philippines qualified for the main tournament, while Israel's second loss eliminated them.

The two teams that were 1–1 played each, with the winner receiving a tournament berth and the loser being eliminated.

Romania's first game was a loss to Canada. Italy and Turkey played each other, with Turkey's second loss eliminating them.

Italy and Romania, who had both lost once, played each other. Romania's second loss eliminated them, while Canada and Egypt played each other, with Egypt being served its first loss; Canada qualified.

Italy played its fourth game of the tournament against Egypt. The closely contested decisive game ended with Egypt qualifying for the main competition and Italy being eliminated.

The top two teams in each group advanced to the quarterfinal round.

Each country was allowed to enter one team of 14 players and they all were eligible for participation. A total number of 317 players were entered.

A total of 301(*) basketball players from 23 nations competed at the Helsinki Games:

(*) NOTE: There are only players counted, which participated in one game at least. Up to now only two reserve player can be named, 14 reserve players are unknown.

Basketball at the 1936 Summer Olympics was the first appearance of the sport of basketball as an official Olympic medal event. The tournament was played between 7 August and 14 August 1936 in Berlin, Germany. 23 nations entered the competition, making basketball the largest tournament of the team sports, but Hungary and Spain withdrew, meaning 21 competed.

Basketball at the 1948 Summer Olympics was the second appearance of the sport of basketball as an official Olympic medal event. A total number of 23 nations entered the competition.

A total of 37 teams entered the 1954 FIFA World Cup qualification rounds, competing for a total of 16 spots in the final tournament. Switzerland, as the hosts, and Uruguay, as the defending champions, qualified automatically, leaving 14 spots open for competition. 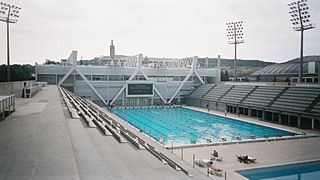 At the 1992 Summer Olympics in Barcelona, Spain, 31 swimming events were contested. There was a total of 641 participants from 92 countries competing.

At the 1992 Summer Olympics in Barcelona, 20 wrestling events were contested, for men only. There were 10 weight classes in each of the freestyle wrestling and Greco-Roman wrestling disciplines.

The 2007 FIBA European Championship, commonly called FIBA EuroBasket 2007, was the 35th FIBA EuroBasket regional basketball championship held by FIBA Europe, which also served as Europe qualifier for the 2008 Summer Olympics, giving a berth to the champion and runner-up teams. It was held in Spain between 3 September and 16 September 2007. Sixteen national teams entered the event under the auspices of FIBA Europe, the sport's regional governing body. The cities of Alicante, Granada, Madrid, Palma de Mallorca, and Seville hosted the tournament. Russia won its first FIBA EuroBasket title since the dissolution of the Soviet Union, by defeating hosts Spain, with a 60–59 score in the final. Russia's Andrei Kirilenko was voted the tournament's MVP.

The men's team sabre was one of seven fencing events on the fencing at the 1936 Summer Olympics programme. It was the seventh appearance of the event. The competition was held from 12 August 1936 to 13 August 1936. 107 fencers from 21 nations competed. Each team could have a maximum of six fencers, with four participating in any given match.

The men's team sabre was one of eight fencing events on the fencing at the 1976 Summer Olympics programme. It was the fifteenth appearance of the event. The competition was held from July 26 to 27, 1976. 63 fencers from 14 nations competed.

The Israel national women's basketball team represents Israel in international basketball matches and is controlled by the Israel Basketball Association.

The 2014 FIBA Basketball World Cup qualification began in earnest at the 2011 Caribbean Championships, a qualifier to the 2012 Centrobasket, which was in itself a qualifier to the 2013 FIBA Americas Championship. The winners of the 2012 Olympic basketball tournament, the United States, qualified outright. The USA joined the host nation Spain, which was earlier elected to host the 2014 FIBA Basketball World Cup in July 2009.

EuroBasket 2017 was the 40th edition of the EuroBasket championship that was organized by FIBA Europe and held between 31 August and 17 September 2017. Beginning from 2017, the continental championships take place every four years with a similar system of qualification as for the FIBA Basketball World Cup.

The Romania national football team represents Romania in international association football and is controlled by the Romanian Football Federation. Between their first match 1922 and 1939, when competitive football stopped for the Second World War, Romania played in 82 matches, resulting in 36 victories, 14 draws, 32 defeats. Throughout this period they played in the Balkan Cup six times between 1931 and 1936 with Romania taking home three titles in 1929–31, 1933 and 1936. Romania also qualified through to three FIFA World Cup's during the 1930s where they got eliminated in the first round in all three attempts with the national team finishing second in their group at the 1930 edition before being eliminated by Czechoslovakia (1934) and Cuba (1938) respectively in the following cups.

This is a list of the Romania national football team results from 1980 to 1999.

The 2019 FIBA Basketball World Cup qualification, for the FIBA Europe region, began in the summer of 2017 and concluded in February 2019. Contrary to previous years, no teams were automatically placed into the FIBA World Cup, so all FIBA Europe nations had to participate in qualifications.

Olympic Games Tokyo 2020 - The Official Video Game is the official Olympic video game of the 2020 Summer Olympics in Tokyo. It was published by Sega. Its international launch is planned in 2020 for Xbox One, PC, PlayStation 4 and Nintendo Switch. It was released in Japan on July 24, 2019, initially one year before the Olympic games was due to take place. However due to the COVID-19 pandemic, the games were pushed back a further year, making the video game release exactly two years before the beginning of the 2020 Summer Olympics. It is the first traditional Olympics game since London 2012.