Last updated June 10, 2021
Not to be confused with History of Jin.
Chinese historical text (compiled in 648)

The Book of Jin is an official Chinese historical text covering the history of the Jin dynasty from 266 to 420. It was compiled in 648 by a number of officials commissioned by the imperial court of the Tang dynasty, with chancellor Fang Xuanling as the lead editor, drawing mostly from official documents left from earlier archives. A few essays in volumes 1, 3, 54 and 80 were composed by the Tang dynasty's Emperor Taizong himself. The contents of the Book of Jin, however, included not only the history of the Jin dynasty, but also that of the Sixteen Kingdoms period, which was contemporaneous with the Eastern Jin dynasty.

Over 20 histories of the Jin had been written during the Northern and Southern dynasties, of which 18 were still extant at the beginning of the Tang dynasty. Yet Emperor Taizong deemed them all to be deficient and ordered the compilation of a new standard history for the period, [1] as part of a wider 6-history project to fill in the gaps between the Records of the Three Kingdoms, the Book of Song, the Book of Qi, the Book of Wei and the Emperor's own time. [2] As part of this ambition its treatises cover not only the Jin but also the preceding Three Kingdoms, making up for the lack of such a section in the Records of the Three Kingdoms. [3]

The book was hastily compiled between 646 CE and 648, by a committee of 21 people led by editor-in-chief Fang Xuanling. As some chapters were written by Emperor Taizong of Tang, the work is sometimes given the honorific "imperially authored". [4]

The Book of Jin had the longest gestation period of any official history, not seeing the light of day until 229 years after the end of the dynasty it describes. [5]

The book has been criticized for being more reflective of the court politics in the Tang dynasty that compiled it, rather than the realities of the Jin dynasty itself. [6]

Despite Fang's team having at their disposal not only the pre-existing Jin histories, but also a large body of actual Jin primary sources, it appears that the book was primarily based on Zang Rongxu's (臧荣绪) identically-titled Jinshu from the Southern Qi, and further incorporates material from fictionalized novels. The Tang historian Liu Zhiji (661–721) accused the editors of generally selecting the sources that had the most vivid and compelling language, rather than the ones that were the most historically reliable. [7]

The collaborative nature of the project coupled with the rushed production time unsurprisingly leaves the book with a number of internal contradictions and editorial errors; such as misspelled personal and place names, draft-like and unpolished language, and "cross-references" to non-existent chapters that were presumably planned but never finished in time for publication. [8]

In spite of these shortcomings, the Book of Jin is recognized as the most important primary source for the Jin dynasty and Sixteen Kingdoms, because the pre-existing histories and other sources it was compiled from have all been lost – save for a few stray quotations in other works. [9]

Year 648 (DCXLVIII) was a leap year starting on Tuesday of the Julian calendar. The denomination 648 for this year has been used since the early medieval period, when the Anno Domini calendar era became the prevalent method in Europe for naming years. 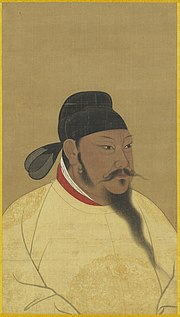 Emperor Taizong of Tang, previously Prince of Qin, personal name Li Shimin, was the second emperor of the Tang dynasty of China, ruling from 626 to 649. He is traditionally regarded as a co-founder of the dynasty for his role in encouraging Li Yuan, his father, to rebel against the Sui dynasty at Jinyang in 617. Taizong subsequently played a pivotal role in defeating several of the dynasty's most dangerous opponents and solidifying its rule over China.

The Zizhi Tongjian is a pioneering reference work in Chinese historiography, published in 1084 AD during the Song dynasty in the form of a chronicle. In 1065 AD, Emperor Yingzong of Song ordered the great historian Sima Guang to lead with other scholars such as his chief assistants Liu Shu, Liu Ban and Fan Zuyu, the compilation of a universal history of China. The task took 19 years to complete, and in 1084 AD, it was presented to his successor Emperor Shenzong of Song. The Zizhi Tongjian records Chinese history from 403 BC to 959 AD, covering 16 dynasties and spanning across almost 1400 years, and contains 294 volumes (卷) and about 3 million Chinese characters.

The Lantingji Xu or Lanting Xu, is a piece of Chinese calligraphy work generally considered to be written by the well-known calligrapher Wang Xizhi from the East Jin Dynasty.

The Book of Wei, also known by its Chinese name as the Wei Shu, is a classic Chinese historical text compiled by Wei Shou from 551 to 554, and is an important text describing the history of the Northern Wei and Eastern Wei from 386 to 550. It is one of the Twenty-Four Histories.

The Book of Sui is the official history of the Sui dynasty. It ranks among the official Twenty-Four Histories of imperial China. It was written by Yan Shigu, Kong Yingda, and Zhangsun Wuji, with Wei Zheng as the lead author. In the third year of Zhenguan of the Tang dynasty (629), Emperor Taizong of Tang ordered Fang Xuanling to supervise the completion of the Book of Sui, which was being compiled around the same time as other official histories were being written. The Book of Sui was completed in 636 AD, the same year as the Book of Chen was completed.

The Book of Chen or Chen Shu was the official history of the Chen dynasty, one of the Southern Dynasties of China. The Book of Chen is part of the official Twenty-Four Histories of imperial China. It was compiled by the Tang dynasty historian Yao Silian and completed in 636 AD. The Chen Shu is a biographical history book with thirty-six volumes, recording the historical facts of 33 years from the accession of Chen Baxian to the last emperor Chen Shubao.

Fang Qiao, courtesy name Xuanling, better known as Fang Xuanling, posthumously known as Duke Wenzhao of Liang, was a Chinese statesman and writer who served as a chancellor under Emperor Taizong in the early Tang dynasty. He was the lead editor of the historical record Book of Jin and one of the most celebrated Tang dynasty chancellors. He and his colleague, Du Ruhui, were often described as role models for chancellors in imperial China.

Du Ruhui (585–630), courtesy name Keming, posthumously known as Duke Cheng of Lai, was a Chinese official who served as a chancellor under Emperor Taizong in the early Tang dynasty. He and his colleague, Fang Xuanling, were often described as role models for chancellors in imperial China.

Hou Junji was a Chinese general and official who served as a chancellor during the reign of Emperor Taizong in the Tang dynasty. He is best known for leading the Tang military campaigns against the Gaochang and Tuyuhun kingdoms. In 643, he was implicated in a plot by the crown prince, Li Chengqian, to overthrow Emperor Taizong, and was executed.

Zhang Liang (traditional Chinese: 張亮; simplified Chinese: 张亮; pinyin: Zhāng Liàng; was a Chinese general and official who served as a chancellor late in the reign of Emperor Taizong in the Tang dynasty. He was eventually accused of using witchcraft – a major taboo in imperial China – and executed in 646.

Chu Suiliang (596–658), courtesy name Dengshan, formally the Duke of Henan, was a Chinese calligrapher, historian, and politician who served as a chancellor during the reigns of the emperors Taizong and Gaozong in the Tang dynasty. He became increasingly trusted by Emperor Taizong toward the end of his reign and was charged with the responsibilities of serving as the imperial historian and providing honest advice. After Emperor Taizong's death, Chu was entrusted with the responsibilities of assisting Emperor Gaozong, along with Emperor Gaozong's maternal uncle, Zhangsun Wuji and early in the reign of the young emperor, he and Zhangsun Wuji gained great powers. In 655, over his strenuous opposition to Emperor Gaozong's removal of his first wife, Empress Wang, and replacing her with Empress Wu, Chu was demoted, and that began a series of demotions, which was successfully launched by Empress Wu. Eventually to be the prefect of the extremely distant Ai Prefecture. He died in exile in 658.

Linghu Defen (582–666), formally Duke Xian of Pengyang (彭陽憲公), was Chinese historian and politician. He was an official of the Chinese dynasties Sui Dynasty and Tang Dynasty. During Tang, he was a major proponent for the compilation of the histories of Sui and its predecessor Northern Zhou and was eventually put in charge of compiling Northern Zhou's official history Book of Zhou, which was completed in 636.

The Shenxian Zhuan, sometimes given in translation as the Biographies of the Deities and Immortals, is a hagiography of immortals and description of Chinese gods, partially attributed to the Daoist scholar Ge Hong (283-343). In the history of Chinese literature, the Shenxian Zhuan followed the Liexian Zhuan.

Kong Yingda, courtesy names Chongyuan (冲遠) and Zhongda (仲達), was a Chinese philosopher during the Sui and Tang dynasty. An amorous Confucianist, who is considered one of the most influential Confucian scholars in Chinese history. His most important work is the Wujing Zhengyi 五經正義, which became the standard curriculum for the Imperial Examinations, and the basis for all future official commentaries of the Five Classics. He was also "skilled at mathematics and the calendar."

Pang Meng was a Chinese general of the Xin Dynasty and early period of the Eastern Han Dynasty. He was born in Shanyang Commandery, Yanzhou.

Three Persian religions refers to the three religions that originated in Persia that were spread in China during the Tang period. They were recognized and protected by the Tang Dynasty and prospered for a while.