The Old Book of Tang,or simply the Book of Tang,is the first classic historical work about the Tang dynasty,comprising 200 chapters,and is one of the Twenty-Four Histories. Originally compiled during the Five Dynasties and Ten Kingdoms period,it was superseded by the New Book of Tang which was compiled in the Song dynasty,but later regained acceptance.

The credited editor was chief minister Liu Xu,but the bulk (if not all) of the editing work was actually completed by his predecessor Zhao Ying. The authors include Zhang Zhao,Jia Wei (賈緯),and Zhao Xi (趙熙). [1]

The Old Book of Tang comprises 200 volumes. [2] Volumes 1-20 contain the annals of the Tang emperors. Twitchett notes that coverage over time in the annals is most dense during the early and middle Tang,including only very sparse information in the late Tang after 847. [3]

The book's compiling began when the Later Jin's founding emperor Shi Jingtang ordered its compilation in 941. The original chief editor was Zhao Ying,who was also the chancellor then. However,by the time of its completion,Liu Xu had become chancellor and taken over the work of organisation;as a result he was credited as chief editor when the work was presented in 945 to Emperor Chu of Jin.

Being a relatively quickly compiled work of official history,the Old Book of Tang was a compilation of earlier annals,now lost;it further incorporates other monographs and biographies,using as sources (for instance) the Tongdian of Du You. [7] These sources were often directly copied from records and earlier histories,and the result would be severely criticised during the Northern Song;Emperor Renzong of Song,for example,called the book "poorly organised,burdened with unimportant details,wanting in style and poorly researched". These errors even included duplicated biographies of characters.

Because of these criticisms,in 1044 a new history of the Tang dynasty was commissioned;with Ouyang Xiu and Song Qi as editors,the New Book of Tang was then produced. After the New Book was presented,the original Old Book of Tang went out of print,and over centuries it became very rare. It was during the Ming dynasty when the remaining copies were gathered and the book was once again published,eventually becoming canonised as one of the Twenty-Four Histories .

Chinese classic texts or canonical texts or simply dianji (典籍) refers to the Chinese texts which originated before the imperial unification by the Qin dynasty in 221 BC,particularly the "Four Books and Five Classics" of the Neo-Confucian tradition,themselves a customary abridgment of the "Thirteen Classics". All of these pre-Qin texts were written in classical Chinese. All three canons are collectively known as the classics. 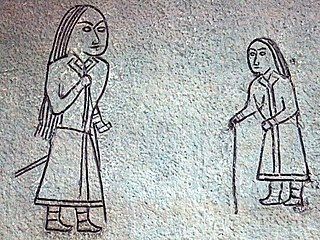 The Göktürks,Celestial Turks or Blue Turks were a nomadic confederation of Turkic peoples in medieval Inner Asia. The Göktürks,under the leadership of Bumin Qaghan and his sons,succeeded the Rouran Khaganate as the main power in the region and established the Turkic Khaganate,one of several nomadic dynasties that would shape the future geolocation,culture,and dominant beliefs of Turkic peoples. 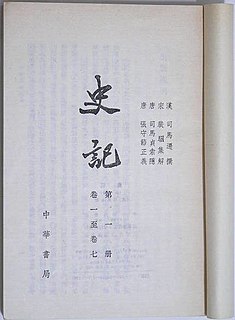 The Records of the Grand Historian,also known by its Chinese name Shiji,is a monumental history of ancient China and the world finished around 94 BC by the Western Han Dynasty official Sima Qian after having been started by his father,Sima Tan,Grand Astrologer to the imperial court. The work covers the world as it was then known to the Chinese and a 2,500-year period from the age of the legendary Yellow Emperor to the reign of Emperor Wu of Han in the author's own time.

The Book of Han or History of the Former Han is a history of China finished in 111,covering the Western,or Former Han dynasty from the first emperor in 206 BCE to the fall of Wang Mang in 23 CE. It is also called the Book of Former Han.

The Book of Wei,also known by its Chinese name as the Wei Shu,is a classic Chinese historical text compiled by Wei Shou from 551 to 554,and is an important text describing the history of the Northern Wei and Eastern Wei from 386 to 550. Widely regarded as the official and authoritative source historical text for that period,it is one of the Twenty-Four Histories.

The grand chancellor,also translated as counselor-in-chief,chancellor,chief councillor,chief minister,imperial chancellor,lieutenant chancellor and prime minister,was the highest-ranking executive official in the imperial Chinese government. The term was known by many different names throughout Chinese history,and the exact extent of the powers associated with the position fluctuated greatly,even during a particular dynasty. During the Six Dynasties period,the term denoted a number of power-holders serving as chief administrators,including zhongshun jian,zhongshu ling,shizhong,shangshu ling and puye.

The Book of Sui is the official history of the Sui dynasty. It ranks among the official Twenty-Four Histories of imperial China. It was written by Yan Shigu,Kong Yingda,and Zhangsun Wuji,with Wei Zheng as the lead author. In the third year of Zhenguan of the Tang dynasty (629),Emperor Taizong of Tang ordered Fang Xuanling to supervise the completion of the Book of Sui,which was being compiled around the same time as other official histories were being written. The Book of Sui was completed in 636 AD,the same year as the Book of Chen was completed.

The Book of Song is a historical text of the Liu Song Dynasty of the Southern Dynasties of China. It covers history from 420 to 479,and is one of the Twenty-Four Histories,a traditional collection of historical records. It was written in 492–493 by Shen Yue from the Southern Qi dynasty (479–502).

The History of the Southern Dynasties is one of the official Chinese historical works in the Twenty-Four Histories canon. It contain 80 volumes and covers the period from 420 to 589,the histories of Liu Song,Southern Qi,Liang dynasty,and Chen dynasty. Like the History of the Northern Dynasties,the book was started by Li Dashi. Following his death,Li Yanshou (李延壽),his son,completed the work on the book between 643 and 659. As a historian,Li Yanshou also took part of some of the compilation during the early Tang dynasty. Unlike the many other contemporary hisUstorical texts,the book was not commissioned by the state.

Lingshu Jing,also known as Divine Pivot,Spiritual Pivot,or Numinous Pivot,is an ancient Chinese medical text whose earliest version was probably compiled in the 1st century BCE on the basis of earlier texts. It is one of two parts of a larger medical work known as the Huangdi Neijing. The other section,which is more commonly used in Traditional Chinese Medicine,is known as the Suwen 素問.

The Book of Chen or Chen Shu was the official history of the Chen dynasty,one of the Southern Dynasties of China. The Book of Chen is part of the official Twenty-Four Histories of imperial China. It was compiled by the Tang dynasty historian Yao Silian and completed in 636 AD. The Chen Shu is a biographical history book with thirty-six volumes,recording the historical facts of 33 years from the accession of Chen Baxian to the last emperor Chen Shubao. 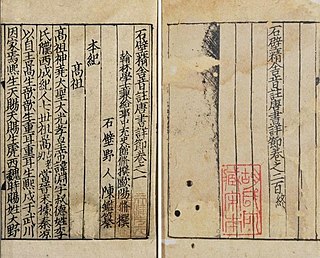 The New Book of Tang,generally translated as "New History of the Tang",or "New Tang History",is a work of official history covering the Tang dynasty in ten volumes and 225 chapters. The work was compiled by a team of scholars of the Song dynasty,led by Ouyang Xiu and Song Qi.

The Tang Huiyao is an institutional history of Tang dynasty compiled by Wang Pu and presented it to Emperor Taizu of Song in 961. The book contains 100 volumes and 514 sections,it has an abundant content for the period before 846,and scarce material unobtainable from the Tongdian,Old Book of Tang,and New Book of Tang.

The History of Liao,or Liao Shi,is a Chinese historical book compiled officially by the Mongol-led Yuan dynasty (1271–1368),under the direction of the historian Toqto'a (Tuotuo),and finalized in 1344. Based on Khitan's primary sources and other previous official Chinese records,it details the Khitan people,Khitan's tribal life and traditions,as well as the official histories of the Liao dynasty and its successor,the Western Liao dynasty.

Quan Tangshi is the largest collection of Tang poetry,containing some 49,000 lyric poems by more than twenty-two hundred poets. In 1705,it was commissioned at the direction of the Qing dynasty Kangxi Emperor and published under his name. The Quan Tangshi is the major reservoir of surviving Tang dynasty poems,from which the pre-eminent shorter anthology,Three Hundred Tang Poems,is largely drawn.

Xu Ji (許寂),courtesy name Xianxian (閑閑),was an official of the Chinese Five Dynasties and Ten Kingdoms Period state Former Shu,serving as a chancellor during the reign of its last emperor Wang Zongyan.

Xi Zuochi,courtesy name Yanwei,was a Jin dynasty historian native to Xiangyang,Hubei. He is principally remembered for being the first historian to regard the Wei dynasty as an illegitimate successor to the Han dynasty.

Song Ruozhao was a Chinese Confucian scholar,poet and imperial official of the Tang dynasty (618–906). Her extant works include one poem,a short fiction story and her annotation to her sister's work:Analects for Women,a book about the proper roles and code of conduct for women,and a biography of Niu Yingzhen.