The High Times Cannabis Cup is a cannabis festival held each November in Amsterdam. It was founded in 1988 by Steven Hager. [1] The event allows judges from around the world to sample and vote for their favorite marijuana varieties. These judges-at-large decide the Cannabis Cup (overall winner in the cannabis variety competition), best new product, best booth, best glass, best hash and best Nederhash. A team of VIP judges decides which seed company has grown the best indica , sativa and hybrid strain and which company has produced the best Nederhash (hashish that is produced only in the Netherlands) and best imported hash. The High Times Cannabis Cup also includes live music, educational seminars and an expo for marijuana-related products from cannabis-oriented businesses.

In 2014, Amsterdam saw its last and final High Times Cannabis Cup, after 27 years of the cup in Amsterdam. This was partly due to the growing uncertainty about Dutch cannabis laws, the now available warmer, legal cannabis locations in the United States and various other countries, and the ill-fated and first ever police raid on the 2010 Amsterdam Cannabis Cup location. [2]

In 2017, the festival celebrated its 30th anniversary. The festival featured an award show hosted by Danny Danko. [3]

Freedom Fighter of the Year

Freedom Fighter of the Year

Best Sativa by a Seed Company

Best Indica by a Seed Company

Best Hybrid by a Seed Company

Best Neder Hash by a Coffeeshop 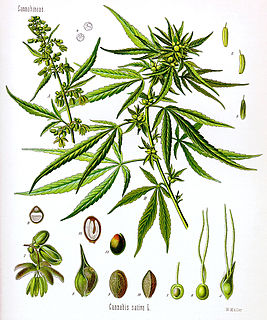 Cannabis is a genus of flowering plants in the family Cannabaceae. The number of species within the genus is disputed. Three species may be recognized: Cannabis sativa, Cannabis indica, and Cannabis ruderalis; C. ruderalis may be included within C. sativa; all three may be treated as subspecies of a single species, C. sativa; or C. sativa may be accepted as a single undivided species. The genus is widely accepted as being indigenous to and originating from Central Asia, with some researchers also including upper South Asia in its origin.

Cannabis sativa is an annual herbaceous flowering plant indigenous to Eastern Asia but now of cosmopolitan distribution due to widespread cultivation. It has been cultivated throughout recorded history, used as a source of industrial fiber, seed oil, food, recreation, religious and spiritual moods and medicine. Each part of the plant is harvested differently, depending on the purpose of its use. The species was first classified by Carl Linnaeus in 1753. The word "sativa" means things that are cultivated.

This article presents common techniques and facts regarding the cultivation of cannabis, primarily for the production and consumption of its infructescences. Cultivation techniques for other purposes differ.

Cannabis ruderalis, or C. sativa subsp. sativa var. spontanea, is a low-THC variety or subspecies of Cannabis which is native to Central and Eastern Europe and Russia. Many scholars accept Cannabis ruderalis as its own species due to its unique traits and phenotypes which distinguish it from Cannabis indica and Cannabis sativa; however, it is widely debated by many other scholars as to whether or not ruderalis is a subspecies of Cannabis sativa. 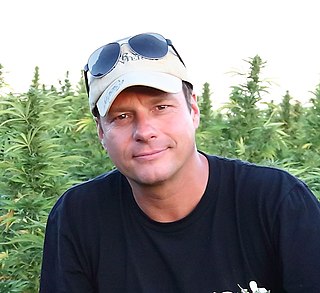 Arjan Roskam is a cannabis entrepreneur and the founder of Green House coffeeshops and Green House Seed Company. Roskam is known being part of the team that breed the Super Lemon Haze cannabis strain by crossing it with a Lemon Skunk and a Super Silver Haze.

Nevil Martin Schoenmakers was an Australian-born cannabis breeder known for founding the first cannabis seedbank, which was called "The Seed Bank of Holland", in the early 1980s in the Netherlands. This was also the first seed company to advertise directly to the public in High Times magazine.

Platinum OG is a 75/25 indica dominant hybrid bred by Apothecary Genetics. It is believed that it stems from the combination of Master Kush, OG Kush, and an unknown third strain – believed to be Purps strain. Its genetics mix makes Platinum OG a heavy strain which is an indicator for most strains of Kush origin. This strain is considered an impure indica.

Christian Hageseth is an entrepreneur, author, marijuana rights advocate and business owner. He was born in Pensacola, Florida and grew up in Fort Collins, Colorado. He graduated from Arizona State University with a degree in Political Science in 1992. Hageseth is the founder of Green Man Cannabis, an award-winning marijuana cultivation and dispensary business in Denver, CO. He is also the founder of American Cannabis Partners (ACP), a cannabis business development firm which is developing the Colorado Cannabis Ranch. Hageseth is the author of Big Weed: An Entrepreneur's High Stakes Adventures in the Budding Legal Marijuana Business, published in 2015 by Macmillan. 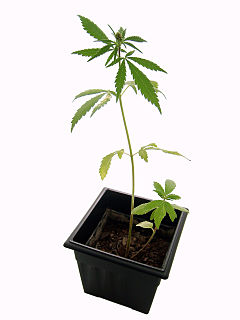 White Widow is a balanced hybrid strain of Cannabis indica and Cannabis sativa that was created and developed by the Greenhouse Seed Company.

The following outline is provided as an overview of and topical guide to the plant Cannabis sativa and its relatives Cannabis indica and Cannabis ruderalis, the drug cannabis (drug) and the industrial product hemp.

DNA Genetics is a cannabis company that cross breeds different strains of the cannabis plant. It was founded by Don Morris and Aaron Yarkoni. The company also sells merchandise, apparel, and accessories. Morris and Yarkoni also work as consultants for other professionals in the industry. The company employs 40 employees in California, Amsterdam, and Canada.

Super Lemon Haze is a sativa-dominant cannabis strain in the haze family of strains. It was originally bred by Franco Loja from the Netherlands-based Green House Seed Co. as a cross between two other strains: Lemon Skunk and Super Silver Haze.

Scott Blakey aka Shantibaba is a cannabis breeder who currently operates from the Czech Republic and is known for creating the cannabis strains White Widow, Super Silver Haze, White Rhino and El Nino. Cannabis distribution companies that Blakey has been involved with include Mr. Nice Seedbank, Greenhouse Seed Co. and CBD Crew.