Hemp milk, or hemp seed milk, is a plant milk made from hemp seeds that are soaked and ground in water. The result resembles milk in colour, texture, and flavour. Hemp is conducive to being organically grown and labelled. Plain hemp milk may be additionally sweetened or flavoured.

Compared to soy milk, in coffee culture, hemp milk is said to produce better latte art and to have a texture more like cow's milk. [1]

Production of hemp milk requires hemp seeds, water, and a blender or juicer. Many recipes call for ground vanilla or vanilla extract to add flavour, and a type of sweetener. Once all the ingredients are blended together, some people pour the hemp milk through a cheesecloth and strainer to get a smoother and more refined milky texture, but this process is optional. [2]

In a 100 millilitres (3.5 imp fl oz; 3.4 US fl oz) serving, hemp milk provides 46 calories from 3 g of carbohydrates, 3 g of fat and 2 g of protein. [3] Hemp milk contains no micronutrients in significant amounts. [3] Although there is limited history of making hemp milk, hemp seeds have been eaten for a long time, and hemp milk is safe for those concerned about soy or milk allergies. [4] 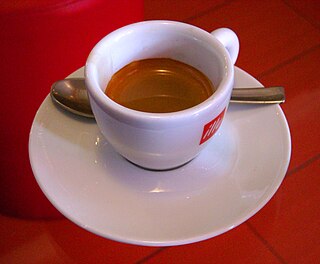 Espresso is a coffee-brewing method of Italian origin, in which a small amount of nearly boiling water is forced under 9–10 bars of atmospheric pressure (expressed) through finely-ground coffee beans. Espresso coffee can be made with a wide variety of coffee beans and roast degrees. Espresso is the most common way of making coffee in southern Europe, especially in Italy, Spain, Portugal and France.

The soybean or soya bean is a species of legume native to East Asia, widely grown for its edible bean, which has numerous uses.

Caffe latte is a coffee drink made with espresso and steamed milk. The word comes from the Italian caffè e latte[kafˌfɛ e lˈlatte], caffelatte[kaffeˈlatte] or caffellatte[kaffelˈlatte], which means "coffee & milk". The word is also sometimes spelled latté or lattè in English with different kinds of accent marks, which can be a hyperforeignism or a deliberate attempt to indicate that the word is not pronounced according to the rules of English orthography.

Twix is a chocolate bar made by Mars, Inc., consisting of a biscuit applied with other confectionery toppings and coatings. Twix are packaged with two or four bars in a wrapper, the new slogan for Twix is "Try both. Pick a side." Miniature and other variations of Twix bars are also available. 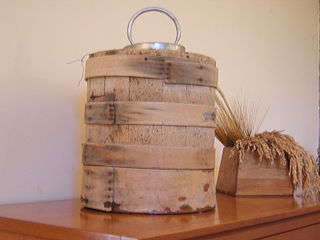 Horchata, or orxata, is a name given to various kinds of plant milk beverages of similar taste and appearance. It originated at least as far back as 13th-century Valencia, where it is known as orxata de xufa. In Spain it is made with soaked, ground, and sweetened tiger nuts, but in Mexico and other parts of the Americas the base is white rice. In West African countries such as Nigeria and Mali, it is known as kunnu aya. Different varieties can be served hot or cold, and it is even used as a flavor in other beverages, such as frappé coffee. 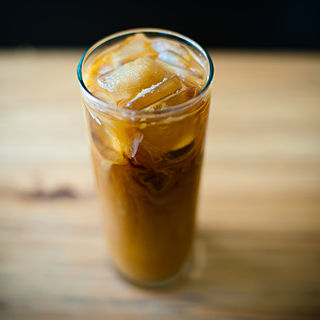 Iced coffee is a type of coffee beverage served chilled, brewed variously with the fundamental division being cold brew – brewing the coffee cold, yielding a different flavor, and not requiring cooling – or brewing normally (hot) and then cooling, generally by simply pouring over ice or into ice cold milk. In hot brewing, sweeteners and flavoring are often mixed into the hot coffee before cooling, due to faster dissolution in hot water. Alternatively, syrup may be used, particularly gum syrup.

A caffè mocha, also called mocaccino, is a chocolate-flavoured variant of a caffè latte. Other commonly used spellings are mochaccino and also mochachino. The name is derived from the city of Mocha, Yemen, which was one of the centers of early coffee trade. 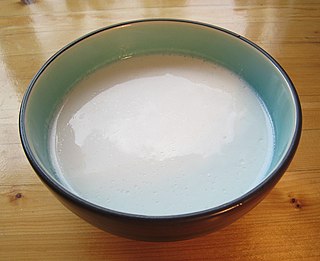 Plant milk refers to manufactured, nondairy beverages made from a water-based plant extract for flavouring and aroma. Plant milks are vegan beverages consumed as plant-based alternatives to dairy milk, and often provide a creamy mouthfeel. For commerce, plant-based liquids are typically packaged in containers similar and competitive to those used for animal lactations, but cannot be labeled as "milk" within the European Union. In 2018, among the roughly 20 plants used to manufacture plant milk, almond, soy, and coconut were the highest-selling plant milks worldwide. The global plant milk market was estimated at US$16 billion in 2018. 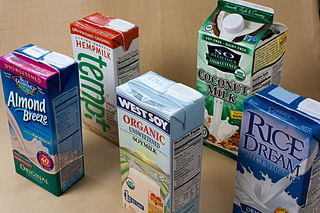 A milk substitute is one term used to describe plant milk in relation to mammalian milk. Other terms include non-dairy beverage, nut milk, grain milk, legume milk and alternative milk.

A flat white is a coffee drink consisting of espresso with microfoam. It is comparable to a latte, but smaller in volume and with less microfoam, therefore having a higher proportion of coffee to milk, and milk that is more velvety in consistency – allowing the espresso to dominate the flavour, while being supported by the milk. 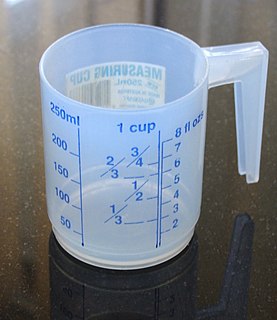 The cup is a cooking measure of volume, commonly associated with cooking and serving sizes. It is traditionally equal to half a liquid pint in US customary units, or an amount between 200 ml and 250 ml in the metric system, which may vary due to location. Because actual drinking cups may differ greatly from the size of this unit, standard measuring cups are usually used instead. 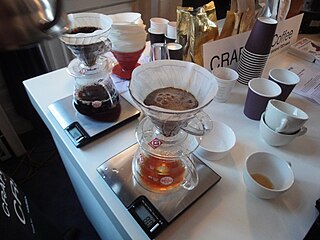 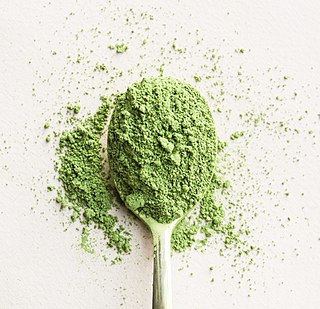 Matcha is finely ground powder of specially grown and processed green tea leaves, traditionally consumed in East Asia. The green tea plants used for matcha are shade-grown for three to four weeks before harvest; the stems and veins are removed during processing. During shaded growth, the plant Camellia sinensis produces more theanine and caffeine. The powdered form of matcha is consumed differently from tea leaves or tea bags, as it is suspended in a liquid, typically water or milk.

Masala chai is a tea beverage made by boiling black tea in milk and water with a mixture of aromatic herbs and spices. Originating in India, the beverage has gained worldwide popularity, becoming a feature in many coffee and tea houses. Although traditionally prepared as a decoction of green cardamom pods, cinnamon sticks, ground cloves, ground ginger, and black peppercorn together with black tea leaves, retail versions include tea bags for infusion, instant powdered mixtures, and concentrates. 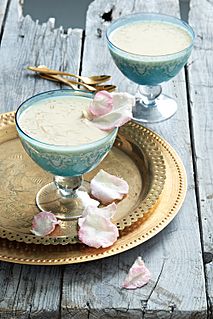 Boeber is the Cape Malay name for an Indian pudding. It has become a traditional Cape Malay sweet, milk drink, made with vermicelli, sago, sugar, and flavoured with cardamom, stick cinnamon, and rose water. The drink is traditionally served on the 15th night of Ramadan to celebrate the middle of the fast, for those who have completed the first 15 days of fasting. They are also known as people who are op die berg. 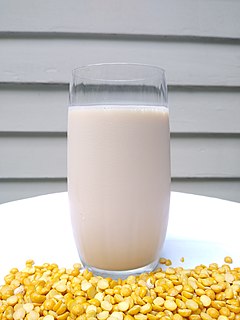