Caversham is a suburb of Perth, Western Australia, located in the City of Swan.

It contains many wineries as part of the Swan Valley wine region. [2] It is the location of brick and tile manufacturers. [3] [4] It has long been associated with agricultural pursuits and in the 1920s had a show. [5]

It has also had child welfare properties such as Riverbank. [6]

It also was the location of the Caversham Wildlife Park, which has since moved into Whiteman Park.

It was the location of a war-time airstrip, the Caversham Airfield, which was later utilised as a motor-raceway. [7] 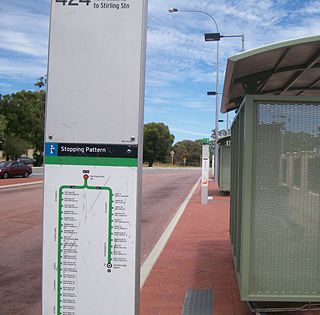 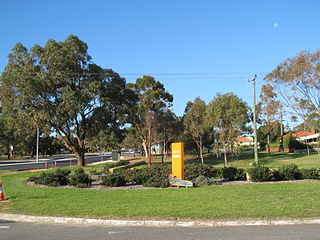 Coolbellup is a suburb in Perth, Western Australia, located 15 km (9mi) south of the central business district within the local government area of the City of Cockburn.

Ballajura is a suburb of Perth, Western Australia, in the City of Swan local government area. Ballajura is located 14 km north of the Perth CBD. The postcode for the suburb is 6066.

The Swan Bells are a set of 18 bells hanging in a specially built 82.5-metre-high (271 ft) copper and glass campanile in Perth, Western Australia. The tower is commonly known as The Bell Tower or the Swan Bell Tower. 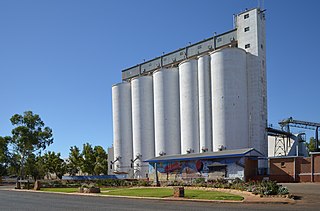 Three Springs is a town located 313 kilometres (194 mi) north of Perth, Western Australia on the Midlands Road, which until the opening of the Brand Highway in 1975 was the main road route from Perth to the state's north. The town is the seat of the Shire of Three Springs. Its economy is based on agriculture and mining. 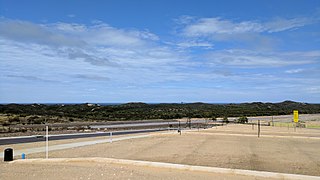 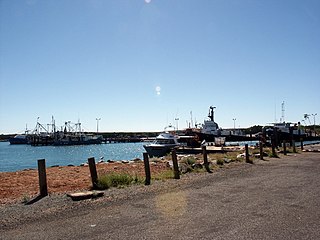 Point Samson is a small coastal settlement 1,579 km north of Perth and 18 km north of Roebourne in the Pilbara region of Western Australia. The town is a popular holiday location for the nearby mining towns, including Wickham, Karratha and Dampier. Fishing is the main industry.

Houghton Wines is an Australian winery originating in the Swan Valley wine region of Western Australia at the historic Houghton Estate. 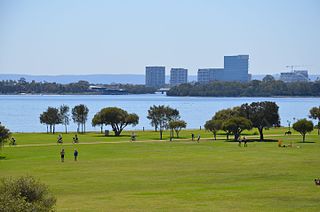 Perth Hills is a term used primarily for marketing purposes to identify the part of the Darling Scarp and hinterland east of the scarp that lies within the Shire of Mundaring, City of Swan, and the City of Kalamunda and as part of the constituent bodies belonging to the Eastern Metropolitan Regional Council of Perth, Western Australia. 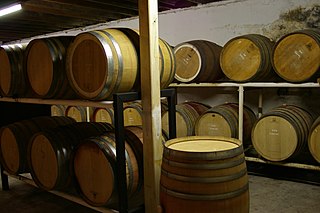 Baskerville is an outer northeastern rural suburb of Perth, Western Australia, in the Swan Valley region, 31 km from Perth's central business district via Midland and Great Northern Highway. Nearly all of it is under cultivation with viticulture being the main economic activity, and several well-established Swan Valley wineries are based here. Its local government area is the City of Swan.

Caversham Airfield, also known as Middle Swan Airfield was an airfield constructed at Caversham, Western Australia during World War II as a parent aerodrome for use by the Royal Navy's Fleet Air Arm and the United States Navy.

Caversham Primary School is a state primary school in Caversham, a suburb of Reading, Berkshire in England. The school was established in 1907 and educates around 450 children between the ages of 4 and 11.

Lucindale is a small town in the south-east region of South Australia. The town is located 345 kilometres (214 mi) south east of the state capital, Adelaide. At the 2006 census, Lucindale had a population of 301. The town is best known for hosting the annual South East Field Days, attracting over 26,000 visitors every March.

West Swan is an electoral district of the Legislative Assembly in the Australian state of Western Australia. It is located in the north-eastern suburbs of Perth.

Mooliabeenee is a locality in Western Australia, east of Gingin, within the Shire of Chittering.