Dorsey Hall is a historic home in Columbia, Maryland, United States. It is a six-by-one-bay, ​2 1⁄2-story stucco structure with a gable roof covered with asphalt shingles. It is a well-preserved and detailed example of the vernacular dwellings of the early 19th century in Howard County and associated with the Dorsey family, one of the "first families" of the county. [2]

Dorsey Hall was built on Dorsey's Search, a parcel of land patented by Hon. John Dorsey of Hockley-in-the-hole (1645–1714) in Baltimore County (now Howard County), the brother of Edward Dorsey. The 479-acre (194 ha) property adjacent to the north branch of the Patuxent River was surveyed by Richard Beard in December 1684, and granted to Dorsey in March 1696. The surrounding residential neighborhood of Dorsey's Search was named after the original land grant. The farm operated with slave labor until the death of Caleb Dorsey in 1864.

In 1963, owner Julius Mandel and Gudelsky Company attempted to rezone the site for high-rise apartments. [3] The property was retitled to the Gudelsky-owned Contee Sand and Gravel Company. [4] The 685-acre property was then purchased by The Rouse Company's shell corporation Columbia Industrial Development Corp. for redevelopment, which was halted in 1968 by residential opposition. [5] The building underwent a renovation in 1979. [2] The stone gristmill remains were still visible onsite at the time. [6]

The 5.4 acres (2.2 ha) of land surrounding Dorsey Hall that was acquired by The Rouse Company was resold to land developers Richard Talkin and Donald Reuwer for $785,000 in 2000. [7] [8] In July 2000, a $3.5 million, 32,000 square-foot office project broke ground. [8] By 2001, the site of the estate was subdivided and reduced to 2 acres with a survey claiming no outbuildings were present unlike the neighboring Woodlawn Estate from the same period. [2]

Dorsey Hall now stands at the entrance to a business park (comprising mostly medical offices) at 5100 Dorsey Hall Drive, the architecture of which is compatible with the building. However, although it forms an imposing image, it has no signage or other identification and is not open to the public. The confusion is amplified by the adjacent business park at 5010 Dorsey Hall Drive, which bears a sign naming itself the "Dorsey Hall Business Park."

Just north of Maryland Route 108, Dorsey Hall is technically at the southern edge of unincorporated Ellicott City, Maryland, rather than the northern edge of Columbia.

It was listed on the National Register of Historic Places in 2001. [1]

Kings Contrivance is a village in the planned community of Columbia, Maryland, United States and is home to approximately 11,000 residents. It is Columbia's southernmost village, and was the eighth of Columbia's ten villages to be developed. Kings Contrivance consists of the neighborhoods of Macgill's Common, Huntington and Dickinson, and includes single-family homes, townhouses, apartments and a Village Center.

Oakland Mills is one of the 10 villages in Columbia, Maryland, United States. It is located immediately east of Town Center, across U.S. Route 29.

Hickory Ridge is one of the 10 villages in Columbia, Maryland, United States, located to the west of the Town Center with a 2014 population of 13,000 in 4,659 housing units. The village overlays the former postal community of Elioak. It was first occupied in 1974. Neighborhoods in the village are Hawthorn, Clary's Forest, and Clemens Crossing. The name Hickory Ridge is derived from the 1753 land grant patented by Greenberry Ridgley and Richard Davis named "Hickory Ridge" and the 1749 slave plantation "Hickory Ridge" in nearby Highland that resides on the tract.

Long Reach, one of ten villages composing Columbia, Maryland, United States, is found in the northeast part of Columbia along Maryland Route 108. Started in 1971, it is one of the oldest villages, and comprises four neighborhoods: Jeffers Hill, Kendall Ridge, Locust Park, and Phelps Luck. The village, with an approximate population of 17,000, is governed by five elected village board members through "Long Reach Community Association, Inc." The Village Office is located in Stonehouse, the community center, which opened in 1974.

Dorsey's Search is a parcel of land patented by John Dorsey of Hockley-in-the-hole (1645–1714) in Baltimore County. The 479-acre (194 ha) property adjacent to the north branch of the Patuxent river was surveyed by Richard Beard in December 1684, and granted to Dorsey in March 1696. The property lying between "Long Reach" and "Elk Ridge" was resurveyed in March 1723 to include 750 acres (300 ha). After several generations of inheritance, a series of legal disputes were held over the land by Rezin Hammond and Richard Ridgley in 1820. In 1827 the property exchanged hands to Robert Oliver, builder of Oakland Mill, who combined it with multiple properties totaling 2,300 acres (930 ha). George Gaither acquired the property in 1838. John Dorsey's grandson, "Patuxent" John Dorsey of "Dorsey's Search" built Dorsey Hall at the site.

Harper's Choice is one of the ten villages that comprise Columbia, Maryland, United States. It lies in the northwest part of Columbia and consists of the neighborhoods of Longfellow, Swansfield, and Hobbit's Glen and had a December 1998 population of 8,695.

The Lawn, is a historic home located at Elkridge, Howard County, Maryland, USA. It is a 19th-century frame house built in 1835 with five outbuildings, three of which date from the 19th century. The house was owned by George Washington Dobbin, who built the home originally as a summer retreat. The Rouse Company commercial corridor and road is named after Dobbin.

White Hall is a historic home located at Ellicott City, Howard County, Maryland, United States. It consists of three sections: the east wing, dating from the early 19th century, the center section, and the west wing. In 1890 the house was partially destroyed by fire and rebuilt in 1900. Three outbuildings remain on the White Hall property: a small square frame workshop; a smokehouse-privy; and springhouse. 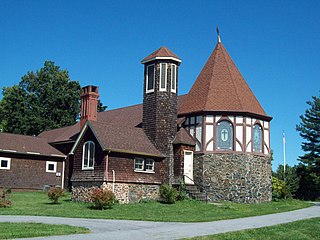 Trinity Church is a historic Episcopal church located at Elkridge, Howard County, Maryland. The post road site was also known as Waterloo, Pierceland, Jessop and Jessup throughout the years. 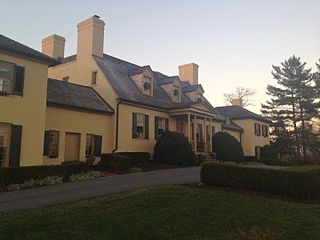 The Belmont Estate, now Belmont Manor and Historic Park, is a historic estate located at Elkridge, Howard County, Maryland, United States. Known in the Colonial period as "Moore's Morning Choice", it is listed on the Maryland Historic Trust (MHT), Inventory of Historic Properties (MIHP), and is on the National Register of Historic Places (NRHP) as part of the Lawyers Hill Historic District, Elkridge, Maryland.

The Oakland Mills Blacksmith House and Shop, also known as Felicity, is a historic property at 5471 Old Columbia Road in Oakland Mills, Maryland.

Oakland Manor is a Federal style stone manor house commissioned in 1810 by Charles Sterrett Ridgely in the Howard district of Anne Arundel County Maryland. The lands that became Oakland Manor were patented by John Dorsey as "Dorsey's Adventure" in 1688 which was willed to his grandson Edward Dorsey. In 1785, Luther Martin purchased properties named "Dorsey's Adventure", "Dorsey's Inheritance", "Good for Little", "Chew's Vineyard", and "Adam the First" to make the 2300 acre "Luther Martin's Elkridge Farm".

Elioak is an unincorporated community in Howard County, Maryland, United States. It was the home of the "Pushpin Farm", a 200-acre slave plantation purchased in 1724 in the Howard District of Anne Arundel County by Col. Edward Dorsey and which is the site of many prominent Dorsey family graves. The postal community was named after the Elioak plantation built by Owen Dorsey, Judge of the Baltimore Orphans' Court. A postal office operated in the community from 12 June 1893 to 15 September 1922. Local farm orchards were known for prize winning apples and pears. Local families such as the Kahler, Miller, and Worthington claimed Elioak as home while they served in World War I. After the war, the name fell out of use.

River Hill Farm is a historic slave plantation located in Clarksville in Howard County, Maryland, United States. River Hill Farm resided on a land tract patented as "Four Brothers Portion". The house was built in the 18th century out of field stone with stucco covering. Outbuilding included a slave quarters. The 500 acre property was the home of Major Henry Owings of Owingsville.