Last updated March 10, 2020
One of the principal agencies of the U.S. Federal Statistical System and part of the U.S. Department of Energy

The Department of Energy Organization Act of 1977 established EIA as the primary federal government authority on energy statistics and analysis, building upon systems and organizations first established in 1974 following the oil market disruption of 1973.

EIA disseminates its data products, analyses, reports, and services to customers and stakeholders primarily through its website and the customer contact center.

By law, EIA's products are prepared independently of policy considerations. EIA neither formulates nor advocates any policy conclusions. The Department of Energy Organization Act allows EIA's processes and products to be independent from review by Executive Branch officials; specifically, Section 205(d) says:

More than 2 million people use the EIA's information online each month. Some of the EIA's products include:

The Federal Energy Administration Act of 1974 created the Federal Energy Administration (FEA), the first U.S. agency with the primary focus on energy and mandated it to collect, assemble, evaluate, and analyze energy information. It also provided the FEA with data collection enforcement authority for gathering data from energy producing and major consuming firms. Section 52 of the FEA Act mandated establishment of the National Energy Information System to “… contain such energy information as is necessary to carry out the Administration’s statistical and forecasting activities …”

The Department of Energy Organization Act of 1977, Public Law 95-91, created the Department of Energy. Section 205 of this law established the Energy Information Administration (EIA) as the primary federal government authority on energy statistics and analysis to carry out a " ...central, comprehensive, and unified energy data and information program which will collect, evaluate, assemble, analyze, and disseminate data and information which is relevant to energy resource reserves, energy production, demand, and technology, and related economic and statistical information, or which is relevant to the adequacy of energy resources to meet demands in the near and longer term future for the Nation’s economic and social needs." [4]

The same law established that EIA's processes and products are independent from review by Executive Branch officials.

The majority of EIA energy data surveys are based on the general mandates set forth above. However, there are some surveys specifically mandated by law, including: 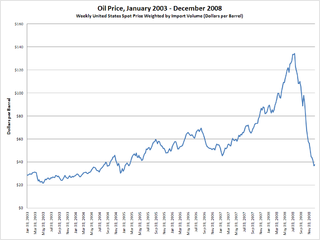 From the mid-1980s to September 2003, the inflation-adjusted price of a barrel of crude oil on NYMEX was generally under US$25/barrel. During 2003, the price rose above $30, reached $60 by 11 August 2005, and peaked at $147.30 in July 2008. Commentators attributed these price increases to many factors, including Middle East tension, soaring demand from China, the falling value of the U.S. dollar, reports showing a decline in petroleum reserves, worries over peak oil, and financial speculation.

Energy in the United States comes mostly from fossil fuels: in 2010, data showed that 25% of the nation's energy originates from petroleum, 22% from coal, and 22% from natural gas. Nuclear energy supplied 8.4% and renewable energy supplied 8%, mainly from hydroelectric dams and biomass; however, this also includes other renewable sources like wind, geothermal, and solar. 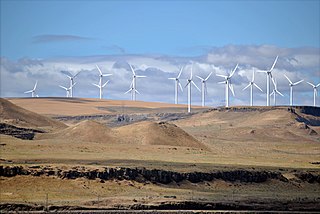 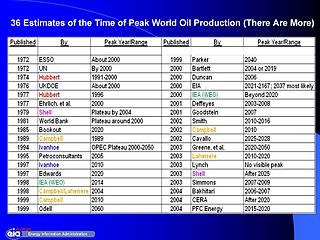 Peak oil is the point at which oil production, sometimes including unconventional oil sources, hits its maximum. Predicting the timing of peak oil involves estimation of future production from existing oil fields as well as future discoveries. The most influential production model is Hubbert peak theory, first proposed in the 1950s. The effect of peak oil on the world economy remains controversial.

Energy markets are commodity markets that deal specifically with the trade and supply of energy. Energy market may refer to an electricity market, but can also refer to other sources of energy. Typically energy development is the result of a government creating an energy policy that encourages the development of an energy industry in a competitive manner. 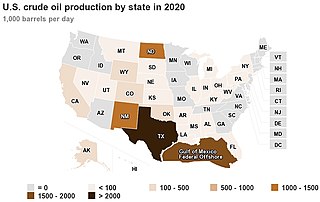 Petroleum in the United States has been a major industry since shortly after the oil discovery in the Oil Creek area of Titusville, Pennsylvania in 1859. The petroleum industry includes exploration for, production, processing (refining), transportation, and marketing of natural gas and petroleum products. As of 2019, the U.S. is the world's largest oil producer. The leading oil-producing area in the United States in 2014 was Texas, followed by the federal zone of the Gulf of Mexico, followed by North Dakota and California. 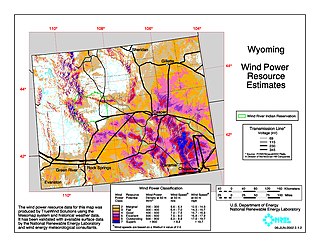 Wyoming has one of the highest wind power potentials of any state in the United States. As of 2016, Wyoming has 1489 megawatts (MW) of wind powered electricity generating capacity, responsible for 9.42% of in-state electricity production. Wyoming produced of 3,800 GWh in 2015, about 9% of the total.

The electricity sector of the United States includes a large array of stakeholders that provide services through electricity generation, transmission, distribution and marketing for industrial, commercial, public and residential customers. It also includes many public institutions that regulate the sector. In 1996, there were 3,195 electric utilities in the United States, of which fewer than 1,000 were engaged in power generation. This leaves a large number of mostly smaller utilities engaged only in power distribution. There were also 65 power marketers. Of all utilities, 2,020 were publicly owned, 932 were rural electric cooperatives, and 243 were investor-owned utilities. The electricity transmission network is controlled by Independent System Operators or Regional Transmission Organizations, which are not-for-profit organizations that are obliged to provide indiscriminate access to various suppliers in order to promote competition.

The distinct methods of electricity generation can incur significantly different costs and these costs can occur at significantly different times relative to when the power is used. Also, calculations of these costs can be made at the point of connection to a load or to the electricity grid. The costs include the initial capital, and the costs of continuous operation, fuel, and maintenance as well as the costs of de-commissioning and remediating any environmental damage. 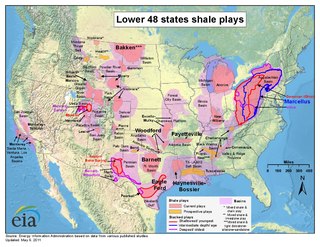 Shale gas in the United States is rapidly increasing as an available source of natural gas. Led by new applications of hydraulic fracturing technology and horizontal drilling, development of new sources of shale gas has offset declines in production from conventional gas reservoirs, and has led to major increases in reserves of US natural gas. Largely due to shale gas discoveries, estimated reserves of natural gas in the United States in 2008 were 35% higher than in 2006.

The Federal Energy Administration (FEA) was a United States government organization created in 1974 to address the 1970s energy crisis, and specifically the 1973 oil crisis. It was merged in 1977 with the newly created United States Department of Energy.

The Energy Conservation Program for Consumer Products Other Than Automobiles is a regulatory program that enforces minimum energy conservation standards for appliances and equipment in the United States. The program was established under Part B of Title III of the Energy Policy and Conservation Act of 1975 and gives the Department of Energy (DOE) the authority to develop and implement test procedures and minimum standards for more than 50 products covering residential, commercial and industrial, lighting, and plumbing applications. The Department of Energy is required to set standards that are "technologically feasible and economically justified."

California produces more renewable energy than any other state in the United States. In 2018, California ranked first in the nation as a producer of electricity from solar, geothermal, and biomass resources and fourth in the nation in conventional hydroelectric power generation. As of 2017, over half of the electricity (52.7%) produced was from renewable sources.