Facedown Records is a Christian rock record label based in Fallbrook, California that is devoted to hardcore punk and metalcore bands (Christian and secular) with a few death metal acts such as Immortal Souls and Indwelling. Founded by No Innocent Victim drummer Jason Dunn [1] in 1997, [2] [3] the label started small with a number of 7" record releases by Overcome, Dodgin Bullets, and Born Blind. As the label grew, it was able to sign artists for full album deals. xDISCIPLEx and the Deal, who were both popular in the Christian and secular scenes,[ citation needed ] released material on Facedown, as well as Figure Four, One-21, and Point of Recognition. The label also signs straight edge groups such as xDEATHSTARx and xLooking Forwardx.

Bands like Seventh Star and Nodes of Ranvier released well-received records through the label, but it was the release of Turn It Around by Comeback Kid (featuring members of Figure Four) that really brought the label more notice.[ citation needed ] Comeback Kid toured behind that album for the following two years, eventually leaving Facedown to sign with Victory Records.

Strike First Records is Facedown's imprint label, which provides label services for smaller bands, and sometimes acts as a "Facedown training ground"; some Strike First bands, such as Bloody Sunday, Kingston Falls, Call to Preserve, and War of Ages have since moved to Facedown. [4] All of Strike First's releases are limited edition physical issue, and are made using no plastic, from recycled cardboard. [1]

Since 2000, [3] the label also hosts an annual two-day "Facedown Fest" in southern California. [6] The rock festival is usually made up of the entire Facedown and Strike First rosters. It has been the site of final performances by The Deal, xDisciplex A.D., and xDEATHSTARx, Seventh Star, and served as the introduction of xLooking Forwardx to Facedown fans, prior to the band signing with the label. The popularity of the Fest has grown,[ citation needed ] and in November 2005, an additional two days were held in Annapolis, Maryland for the convenience of those in the eastern part of the U.S. who cannot easily make it to California. For 2017's Facedown Fest, and to celebrate their 20th anniversary, the label is hosting the festival as a three-day event, with old acts such as A Plea for Purging, Bloodlined Calligraphy and xLooking Forwardx and new acts such as Nothing Left and Comrades. The 20th anniversary had many notable acts, including Impending Doom, Sinai Beach, Gideon, Hands and War of Ages. [7]

Alove for Enemies was a Christian metalcore band based in Long Island, New York, US. The claims influences as Shai Hulud, Darkest Hour, and Few Left Standing.

Sinai Beach was a Christian metal band that was formed in Riverside, California, in 2000. The band has stated on multiple occasions that they are named after Mount Sinai, where Moses was given the Ten Commandments in the Bible. 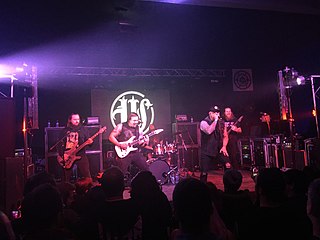 War of Ages is an American Christian metal band formed in Erie, Pennsylvania in 2002.

The Figure Four is a Canadian hardcore punk band. It started in 1996, and recorded 3 albums since. The band usually performs songs of the hardcore punk and metalcore genres. The band is currently on hiatus.

Point of Recognition was a Christian hardcore band from Southern California. They take their influences from bands such as All Out War, Buried Alive, No Innocent Victim, and Hatebreed. The name Point of Recognition is based on the defining moment when a person comes to faith in Christ.

xDEATHSTARx was an American Christian metalcore band from Redlands, California. All of the members are straight edge and they incorporate both Christian and straight edge themes within their music, with their view of the loss of values in modern society. The group released its first album in 2004 and is currently signed to Facedown Records. xDEATHSTARx has recorded two full-length albums and two independent EPs on independent record labels, including Facedown Records, Life Sentence Records, and I Witness Media. The band features three full-time vocalists as well as two guitarists and a bassist. They have appeared on the Discovery Channel's Jesse James' Monster Garage. In 2008, they released a remastered version of their debut album, which had been out of print. In March 2009 the band announced they were breaking up and moving on their separate ways. 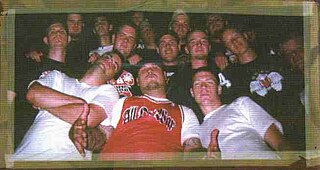 Impending Doom is an American Christian deathcore band from Riverside, California. The group has released six full-length studio albums and are currently a five piece with lead vocalist Brook Reeves as one of the two original remaining members along with Manny Contreras who left the band in 2010 but returned in 2012. The band refers to their style of music as "gorship" - a portmanteau of the words gore and worship.

Nodes of Ranvier is a metalcore band from Sioux Falls, South Dakota, USA, that was signed to Victory Records. The band is described as "one of Sioux Falls' most successful and popular acts ever." They have played with bands such as Bleeding Through, Every Time I Die, Bury Your Dead, Caliban, Comeback Kid, Norma Jean, Misery Signals, Extol and more across the US. The band's name refers to the myelin sheath gaps which are also called Nodes of Ranvier.

Symphony in Peril was a Christian metalcore band from Columbus, Ohio, United States. The band started in early 2002, and ended in late 2005, after Hellfest, which the band was to play, but was cancelled at the last minute.

A Plea for Purging was a Christian metalcore band based out of Nashville, Tennessee. During their time active, they released four full-length albums on Facedown Records and two EPs. Their final release, The Life & Death of A Plea for Purging, reached No. 24 on the US Billboard Rock Albums chart and No. 11 on the Heatseekers chart. Guitarist Blake Martin played on Project 86's record, Wait for the Siren and was a touring member for Haste the Day. Drummer Aaron Eckermann was a touring musician for Corpus Christi. Vocalist Andy Atkins was featured on The Crimson Armada's song "Composed of Stone", from their album Conviction.

Letter To The Exiles was an American Christian metalcore band from Long Island, New York. The band was active from 2008 through 2013 and was signed to Facedown Records in 2012.

Blood & Ink Records is an independent record label that specializes in Christian punk and Christian hardcore music. The label was founded in Richmond, Virginia, in the spring of 2002. The label has worked with such bands as Soul Embraced, as well as helping launch careers for Blessed by a Broken Heart, Burden of a Day and With Blood Comes Cleansing.

Overcome are an American Christian metalcore band. They come from Phoenix, Arizona. The band started making music in 1993 until their decade-long hiatus from 2000 to 2010, when they commenced making music again. Tooth & Nail Records released the band's first two albums, Blessed Are the Persecuted in 1996 and When Beauty Dies in 1997. Facedown Records has released the other albums from the band signed the band. They released Immortal Until Their Work Is Done in 1999, More Than Death in 2001, The Great Campaign of Sabotage in 2011, and No Reserves. No Retreats. No Regrets. in 2013. They were one of the first "Spirit-Filled Hardcore" bands, along with Unashamed, Focused, Strongarm, and Zao. They were the first band signed to Facedown Records. The band is playing at Facedown Fest 2017.

Bloodlined Calligraphy is an American Christian metal band, and they primarily play metalcore. They come from Ypsilanti, Michigan. The band started making music in 1999. Their membership was Matt Carter, Ally French, Ryan Hampton, and Eric Cargile. The band released, Say Hi to the Bad Guy, an album, with Selah Records, in 2002. The group became part of Strike First Records, where they released, The Beginning of the End, an extended play, in 2004. They signed to Facedown Records, where they released, They Want You Silent, another studio album, in 2004. Their subsequent studio album, Ypsilanti, was released by Facedown Records, in 2006. The band played their last show on April 19, 2014. The band reunited in 2017 for Facedown Fest 2017.

Thieves & Liars was an American Christian rock and Christian metal band from San Diego, California, where they formed in 2006, and disbanded in 2010. The members of the band were vocalist and bassist, Joey Bradford, drummer and vocalist, Kyle Rosa, and lead guitarist, Corey Edelmann. Their first album, When Dreams Become Reality, was released in 2008 by Facedown Records alongside Dreamt Records. The subsequent album, American Rock 'N' Roll, was released by the aforementioned record labels, in 2009.

xLooking Forwardx is an American Christian hardcore band, and they primarily play hardcore punk, while they are members of the straight edge movement. They come from Bel Air, Maryland. The band started making music in 1999. Their lineup consists of brothers Justin (vocals) and Josh Chaillou (guitars), their cousin Kevin Doherty (bass), and Kevin O'Brien (drums). The band released a studio album, Ahoy Crew Members!, in 2002 with DFF Records. Their subsequent studio album, What This Means to Me, was released by Blood and Ink Records, in 2004. The signed to Facedown Records, where they released, The Path We Tread, a studio album, in 2005. Their next release, an extended play, Down with the Ship, was released by Facedown Records, in 2012.

Seventh Star is an American Christian hardcore and Christian metal band, and they primarily play hardcore punk and metalcore. They come from Ocala, Florida. The band started making music, in 1998, founded by Mike Whitaker, Jai Leacock and Shawn Douglas and disbanded, in 2008, while their members were Shawn Douglas, Johnny Intravaia, Drew Russ, and Chase Moore,. They released four albums, the first being "Lifeblood" which was mainly DIY, followed by three with Facedown Records, Dead End in 2003, Brood of Vipers in 2005, and The Undisputed Truth in 2007. The band, as of 2015, reunited for some concerts, one with the support of Gideon, Bishop, and Culture Killer. The band also played Facedown Fest in 2016.

Dave Quiggle is an American musician who played hardcore punk throughout his whole career. He played for various projects, being: xDISCIPLEx A.D., No Innocent Victim, Shockwave, and Jesus Wept. He currently works for Facedown Records as a Graphic Designer.