Godmother is a 1999 Hindi biographical drama film directed by Vinay Shukla released in 1999, and ostensibly inspired by the life of Santokben Jadeja, who ran the Mafia operations at Porbandar, Gujarat, in the late 1980s and early 1990s and later turned politician. [1]

Sanjeev Abhyankar (singing), Vishal Bhardwaj (music) and Javed Akhtar (lyrics) won the National Awards for this movie. The songs were: 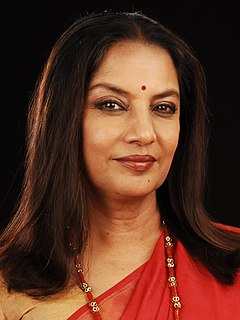 Shabana Azmi is an Indian actress who worked in Hindi films, television and theatre. Regarded as one of the finest actresses in India, Azmi's performances in films of various genres have earned her praise and several accolades. This includes a record five National Film Awards and five Filmfare Awards. She was honoured among "women in cinema" at the 30th International Film Festival of India. In 1988, the Government of India awarded her with Padma Shri, the fourth highest civilian honour of the country. In 2012, she was awarded Padma Bhushan, the third highest civilian honour by the Government of India.

Javed Akhtar is an Indian poet, lyricist, screenwriter and political activist who works in Hindi cinema. He is originally from the Gwalior area. He is a recipient of the Padma Shri (1999), Padma Bhushan (2007), the Sahitya Akademi Award as well as five National Film Awards. In the early part of his career, he was a screenplay writer, creating films such as Deewar, Zanjeer and Sholay. Akhtar eventually shifted his work focus from less screenwriting to more lyrics writing and socio-political activism. He campaigned for Communist Party of India (CPI) and their candidate in the 2019 Indian general election. He also remained a member of Rajya Sabha. In 2020, he received the Richard Dawkins Award for his contribution to secularism, free thinking, for critical thinking, holding religious dogma up to scrutiny, advancing human progress and humanist values. He was chosen as a recipient for the Richard Dawkins Award for being "the bright light for reason, freethought, and atheism in a dark time". 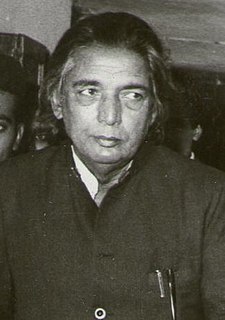 Earth is a 1999 Indian period romance drama film directed by Deepa Mehta. It is based upon Bapsi Sidhwa's novel, Cracking India, set during the 1947 partition of India. Earth is the second installment of Mehta's Elements trilogy, preceded by Fire (1996) and followed by Water (2005). It was India's entry for the 1999 Academy Award for Best Foreign Language Film. 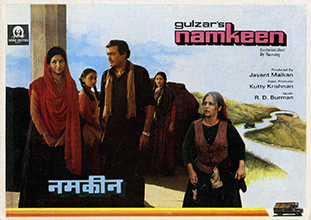 Namkeen (transl. Salty), is a 1982 Hindi-language film, directed by Gulzar, with Sharmila Tagore, Sanjeev Kumar, Shabana Azmi and Waheeda Rehman in the lead role. It was yet another film by Gulzar made on some very sensitive but untouched aspects of Indian society especially in rural areas. The story Akal Basant was by Samaresh Basu on whose story, Gulzar had previously made Kitaab (1977). 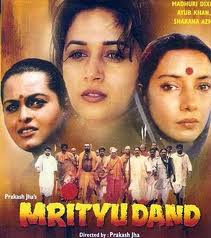 Mrityudand is an Indian Hindi drama film released in 1997. It was directed and produced by Prakash Jha and stars Madhuri Dixit, Shabana Azmi, Ayub Khan, Mohan Agashe and Om Puri. 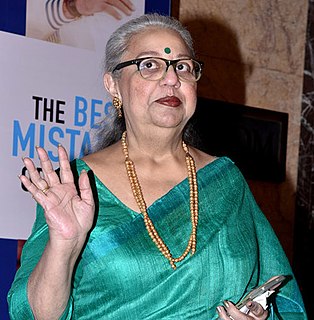 Honey Irani is an Indian film actress and screenwriter, who works in Hindi cinema. She started her career as a child actor with roles in films such as Mahesh Kaul’s Pyar ki Pyas. It is said that Mr.Kaul kept her at his home so she would be comfortable during the film’s shooting. She was probably four to five years old when the shooting of the movies Chirag Kahan Roshni Kahan and Bombay Ka Chor started. 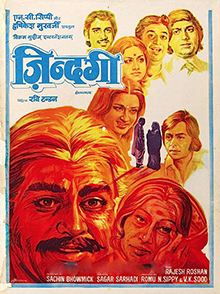 Zindagi (transl. Life) is a 1976 Hindi movie produced by Romu Sippy and directed by Ravi Tandon. The film stars Mala Sinha, Sanjeev Kumar, Vinod Mehra, Moushumi Chatterjee, Aruna Irani, Deven Verma, A. K. Hangal, Padmini Kolhapure, Keshto Mukherjee and Iftekhar. The film's music is by Rajesh Roshan. The movie is based on the 1937 movie Make Way for Tomorrow which was also later adapted in 2003 in Hindi as Baghban. 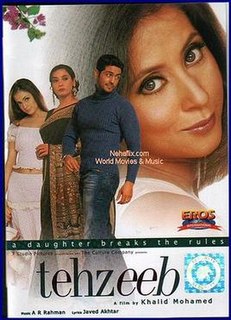 Tehzeeb (transl. 'Etiquette') is a 2003 Indian drama film directed by Khalid Mohammed. It premiered on 21 November 2003. The film stars Shabana Azmi, Urmila Matondkar, Diya Mirza, Arjun Rampal and Rishi Kapoor in a special appearance. Urmila and Shabana were praised for their roles. It was inspired by Ingmar Bergman's Swedish drama Autumn Sonata (1978), and was dedicated to Bergman.

Pandit Sanjeev Abhyankar is a Hindustani classical music vocalist of the Mewati Gharana. He won the National Film Award for Best Male Playback Singer in 1999 for his song, Suno Re Bhaila, in the Hindi film, Godmother and also the Kumar Gandharva National Award 2008 from the Govt of Madhya Pradesh for sustained excellence in the field of Classical Arts.

Sampooran Singh Kalra, known professionally as Gulzar or Gulzar Saab, is an Indian lyricist, poet, author, screenwriter, and film director. He started his career with music director S.D. Burman as a lyricist in the 1963 film Bandini and worked with many music directors including R. D. Burman, Salil Chowdhury, Vishal Bhardwaj and A. R. Rahman. He was awarded Padma Bhushan in 2004, the third-highest civilian award in India, the Sahitya Academy Award, and the Dadasaheb Phalke Award — the highest award in Indian cinema. He has won 5 several Indian National Film Awards, 22 Filmfare Awards, one Academy Award and one Grammy Award.

Devata is a 1978 Hindi film, directed by S. Ramanathan. It stars Sanjeev Kumar and Shabana Azmi in lead roles. This movie was remake of the Tamil film Gnana Oli, with Sivaji Ganeshan in the lead. 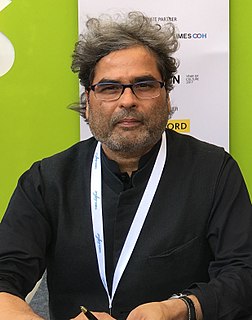 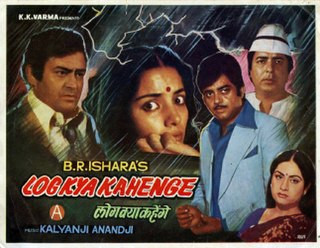 Log Kya Kahenge is a 1982 Indian Hindi-language film produced and directed by B. R. Ishara. It stars Shabana Azmi, Shatrughan Sinha and Sanjeev Kumar in pivotal roles and also features Navin Nischol. The title of the film, "Log Kya Kahenge", is documented as a common stigma facing women in Indian society who challenge pre-arranged marriages and are expected to behave in a certain manner. The film deals with themes of murder and adultery.

Parinay is a 1974 Indian Hindi-language film directed by Kantilal Rathod and produced by Samantar Chitra. The film starred Romesh Sharma and Shabana Azmi, with Asha Sachdev, Dinesh Thakur, Priti Ganguly and T.P. Jain in the supporting cast. Released on 1 January 1974, this film was associated with Saregama. The screenplay was by Rathod and Shukla, whereas the cinematography was by K. K. Mahajan.