The grass snake (Natrix natrix), sometimes called the ringed snake or water snake, is a Eurasian non-venomous colubrid snake. It is often found near water and feeds almost exclusively on amphibians.

Many subspecies are recognized, including: [2]

The grass snake is typically dark green or brown in colour with a characteristic yellow or whitish collar behind the head, which explains the alternative name ringed snake. The colour may also range from grey to black, with darker colours being more prevalent in colder regions, presumably owing to the thermal benefits of being dark in colour. The underside is whitish with irregular blocks of black, which are useful in recognizing individuals. It can grow to 1 m (3 ft 3 in) or more in length. [4] [5]

The grass snake is widely distributed in mainland Europe, ranging from mid Scandinavia to southern Italy. It is also found in the Middle East and northwestern Africa.

Grass snakes in Britain were thought to belong to the subspecies N. n. helvetica but have been reclassified as the barred grass snake Natrix helvetica. Any records of N. natrix in Britain are now considered to have originated from imported specimens. [3]

Grass snakes mainly prey on amphibians, especially the common toad and the common frog, although they may also occasionally eat ants and larvae. Captive snakes have been observed taking earthworms offered by hand, but dead prey items are never taken. The snake will search actively for prey, often on the edges of the water, using sight and sense of smell (using Jacobson's organ). They consume prey live without using constriction. [6]

Grass snakes are strong swimmers and may be found close to freshwater, although there is evidence individual snakes often do not need bodies of water throughout the entire season. [6]

The preferred habitat appears to be open woodland and "edge" habitat, such as field margins and woodland borders, as these may offer adequate refuge while still affording ample opportunity for thermoregulation through basking. Pond edges are also favoured and the relatively high chance of observing this secretive species in such areas may account for their perceived association with ponds and water.

Grass snakes, like most reptiles, are at the mercy of the thermal environment and need to overwinter in areas which are not subject to freezing. Thus, they typically spend the winter underground where the temperature is relatively stable. [6]

As spring approaches, the males emerge first and spend much of the day basking in an effort to raise body temperature and thereby metabolism. This may be a tactic to maximise sperm production, as the males mate with the females as soon as they emerge up to two weeks later in April, or earlier if environmental temperatures are favourable. The leathery-skinned eggs are laid in batches of eight to 40 in June to July and hatch after about 10 weeks. To survive and hatch, the eggs require a temperature of at least 21 °C (70 °F), but preferably 28 °C (82 °F), with high humidity. Areas of rotting vegetation, such as compost heaps, are preferred locations. The young are about 18 centimetres (7 in) long when they hatch and are immediately independent. [6]

After breeding in summer, snakes tend to hunt and may range widely during this time, moving up to several hundred metres in a day. [6] Prey items tend to be large compared to the size of the snake, and this impairs the movement ability of the snake. Snakes that have recently eaten rarely move any significant distance and will stay in one location, basking to optimize their body temperature until the prey item has been digested. Individual snakes may only need two or three significant prey items throughout an entire season.

Ecdysis occurs at least once during the active season. As the outer skin wears and the snake grows, the new skin forms underneath the old, including the eye scales which may turn a milky blue/white colour at this time—referred to as being 'in blue'. The blue-white colour comes from an oily secretion between the old and new skins; the snake's coloration will also look dull, as though the animal is dusty. This process affects the eyesight of the snakes and they do not move or hunt during this time; they are also, in common with most other snakes, more aggressive. The outer skin is eventually sloughed in one piece (inside-out) and normal movement activity is resumed. [6]

Grass snakes display a rare defensive behavior involving raising the front of the body and flattening the head and neck so that it resembles a cobra's hood, although the geographic ranges of grass snakes and of cobras overlap very little. However, the fossil record shows that the extinct European cobra Naja romani occurs in Miocene-aged strata of France, Germany, Austria, Romania, and Ukraine and thus overlapped with Natrix species including the extinct Natrix longivertebrata, suggesting that the grass snake's behavioral mimicry of cobras is a fossil behavior, although it may protect against predatory birds which migrate to Africa for the winter and encounter cobras there. [9]

The species has various predator species, including corvids, storks, owls and perhaps other birds of prey, foxes, and the domestic cat.

In Denmark it is protected, [10] as all five species of reptiles were protected in 1981. Two of the subspecies are considered critically endangered: N. n. cetti (Sardinian grass snake) and N. n. schweizeri. [1]

In the Baltic mythology, the grass snake (Lithuanian: žaltys, Latvian: zalktis) is seen as a sacred animal. [11] [12] It was frequently kept as a pet, living under a married couple's bed or in a special place near the hearth. Supposedly, snakes ate food given to them by hand. [13]

After the Christianization of Lithuania and Latvia, the grass snake still retained some mythological significance. In spite of the serpent's symbolic meaning as a symbol of evil in Christianity, in Latvia and Lithuania there were various folk beliefs, dating even to the late 19th century, that killing grass snakes might bring grave misfortune or that an injured snake will take revenge on the offender. The ancient Baltic belief of grass snakes as household spirits transformed into a belief that there is a snake (known or not to the inhabitants) living under every house; if it leaves, the house will burn down. [14] Common Latvian folk sayings include "who kills a grass snake, kills his happiness" and "when the Saulė sees a dead grass snake, she cries for 9 days". [15]

Well-known literary works based on these traditions include Lithuanian folk tale Eglė the Queen of Serpents (Eglė žalčių karalienė) and the Latvian folk fairytale "The grass snake's bride" (Zalkša līgava). These works include another common theme in Baltic mythology: that grass snakes wear crowns (note grass snake's yellow spots) and that there is a king of snakes who wears a golden crown. In some traditions the king of snakes changes every year; he drops his crown in spring and the other snakes fight for it (possibly based on the mating of grass snakes). [16]

Today grass snakes hold a meaning of house blessing among many Latvians and Lithuanians. One tradition is to put a bowl of milk near a snake's place of residence, although there is no evidence of a grass snake ever drinking milk. [17] [18] Driven by late 19th century and 20th century Romantic nationalism, grass snake motifs in Latvia have gained a meaning of education and wisdom, and are common ornaments in the military, folk dance groups and education logos and insignia. They are also found on the Lielvārde Belt. [19] The grass snake has also become one of the main symbols of the Lithuanian neo-pagan movement Romuva.

Virgil in his 29 BC Georgics (book III, lines 425-439: ) describes the grass snake as a large feared snake living in marshes in Calabria, eating frogs and fish. 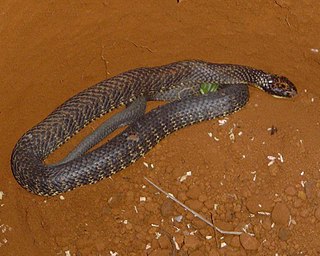 Tiger snakes are a large and highly venomous snake of southern Australia, including its coastal islands and Tasmania. These snakes are often observed and locally well known by their banding, black and yellow like a tiger, although the species can be highly variable in coloration and patterning. All populations are classified within the genus Notechis (Elapidae). Their diverse characteristics have been classified either as distinct species or by subspecies and regional variation.

Natrix is a genus of Old World snakes found across Eurasia in the subfamily Natricinae of the family Colubridae.

The Aesculapian snake, is a species of nonvenomous snake native to Europe, a member of the Colubrinae subfamily of the family Colubridae. Growing up to 2 metres (6.6 ft) in length, it is among the largest European snakes, similar in size to the four-lined snake and the Montpellier snake. The Aesculapian snake has been of cultural and historical significance for its role in ancient Greek, Roman and Illyrian mythology and derived symbolism.

The queen snake is a species of nonvenomous semiaquatic snake, a member of the subfamily Natricinae of the family Colubridae. The species is endemic to North America.

Nerodia is a genus of nonvenomous colubrid snakes commonly referred to as water snakes due to their aquatic behavior. The genus includes nine species, all native to North America. 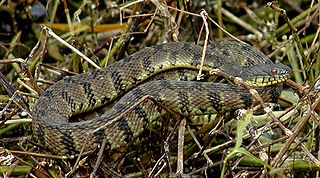 Nerodia rhombifer, commonly known as the diamondback water snake, is a species of nonvenomous natricine colubrid endemic to the central United States and northern Mexico. There are three recognized subspecies of N. rhombifer, including the nominotypical subspecies. 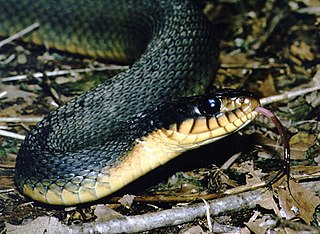 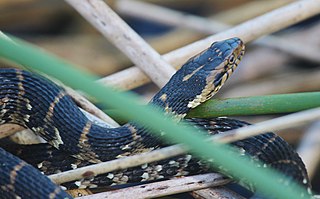 The banded water snake or southern water snake is a species of mostly aquatic, nonvenomous, colubrid snakes endemic to the Midwest and Southeastern United States.

Regina grahamii, commonly known as Graham's crayfish snake, is a species of nonvenomous semiaquatic snake in the subfamily Natricinae of the family Colubridae. The species is endemic to the central United States.

Morelia spilota spilota is a subspecies of carpet python, popularly known as the diamond python. It is a medium to large snake, found in coastal areas and adjacent ranges of south-eastern Australia. It is the most southerly occurring python in the world and is found at higher altitudes than any other species of Australian python. 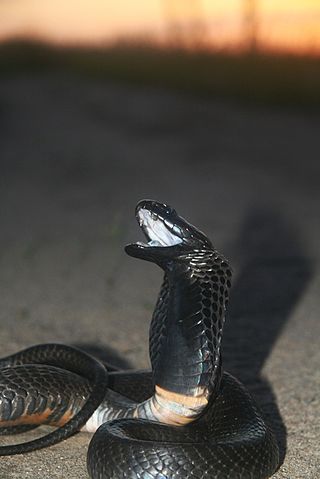 The black-necked spitting cobra is a species of spitting cobra found mostly in sub-Saharan Africa. They are moderately sized snakes that can grow to a length of 1.2 to 2.2 m in length. Their coloration and markings can vary considerably. They prey primarily on small rodents. They possess medically significant venom, although the mortality rate for untreated bites on humans is relatively low. Like other spitting cobras, they can eject venom from their fangs when threatened. The neurotoxic venom irritates the skin, causing blisters and inflammation, and can cause permanent blindness if the venom makes contact with the eyes and is not washed off.

The common watersnake is a species of large, nonvenomous, common snake in the family Colubridae. The species is native to North America. It is frequently mistaken for the venomous cottonmouth.

Anchieta's cobra, sometimes referred to as the Angolan cobra, is a species of venomous snake in the family Elapidae. The species is native to Southern Africa.

The barred grass snake is a non-venomous colubrid snake from Western Europe, living in and close to water. It was included within the grass snake species, Natrix natrix, until August 2017, when genetic analysis led to its reclassification as a separate species.

Naja romani is an extinct species of cobra from the Miocene of Europe. Its remains have been found from France to Russia and suggest a continued growth to larger sizes throughout its range in time. While successful during the early and middle stages of the Miocene, the species disappeared from the fossil record of Central Europe during the late Miocene with the last known specimen being recovered from a site in the modern Caucasus, inferred to have been a refuge for reptiles. Estimates suggest that Naja romani may have reached a length of over 2 m.

Wikimedia Commons has media related to Natrix natrix .
This page is based on this Wikipedia article
Text is available under the CC BY-SA 4.0 license; additional terms may apply.
Images, videos and audio are available under their respective licenses.