The Battle of Waterloo was fought on Sunday, 18 June 1815, near Waterloo in the United Kingdom of the Netherlands, now in Belgium. A French army under the command of Napoleon was defeated by two of the armies of the Seventh Coalition. One was a British-led coalition consisting of units from the United Kingdom, the Netherlands, Hanover, Brunswick, and Nassau, under the command of the Duke of Wellington. The other was a larger Prussian army under the command of Field Marshal von Blücher. The battle marked the end of the Napoleonic Wars. The battle was contemporaneously known as the Battle of Mont Saint-Jean (France) or La Belle Alliance. 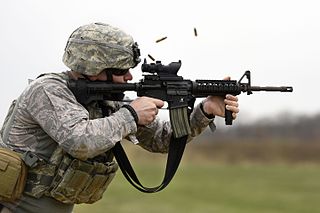 A carbine is a long gun that has a barrel shortened from its original length. Most modern carbines are rifles that are compact versions of a longer rifle or are rifles chambered for less powerful cartridges. 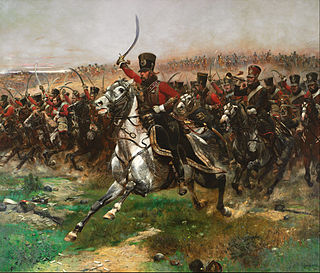 Historically, cavalry are soldiers or warriors who fight mounted on horseback. Cavalry were the most mobile of the combat arms, operating as light cavalry in the roles of reconnaissance, screening, and skirmishing in many armies, or as heavy cavalry for decisive shock attacks in other armies. An individual soldier in the cavalry is known by a number of designations depending on era and tactics, such as cavalryman, horseman, trooper, cataphract, knight, hussar, uhlan, mamluk, cuirassier, lancer, dragoon, or horse archer. The designation of cavalry was not usually given to any military forces that used other animals for mounts, such as camels or elephants. Infantry who moved on horseback, but dismounted to fight on foot, were known in the early 17th to the early 18th century as dragoons, a class of mounted infantry which in most armies later evolved into standard cavalry while retaining their historic designation. 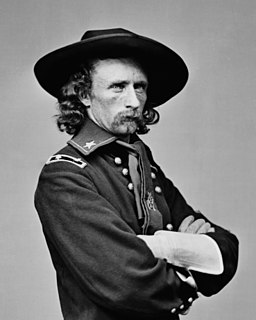 George Armstrong Custer was a United States Army officer and cavalry commander in the American Civil War and the American Indian Wars. 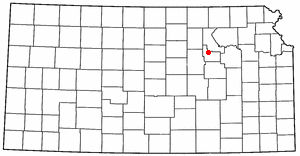 Fort Riley is a United States Army installation located in North Central Kansas, on the Kansas River, also known as the Kaw, between Junction City and Manhattan. The Fort Riley Military Reservation covers 101,733 acres (41,170 ha) in Geary and Riley counties. The portion of the fort that contains housing development is part of the Fort Riley census-designated place, with a residential population of 7,761 as of the 2010 census. The fort has a daytime population of nearly 25,000. The ZIP Code is 66442. 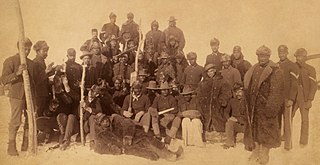 Buffalo Soldiers originally were members of the 10th Cavalry Regiment of the United States Army, formed on September 21, 1866, at Fort Leavenworth, Kansas. This nickname was given to the Colored Cavalry by Native American tribes who fought in the Indian Wars. The term eventually became synonymous with all of the African-American regiments formed in 1866:

A charge is an offensive maneuver in battle in which combatants advance towards their enemy at their best speed in an attempt to engage in a decisive close combat. The charge is the dominant shock attack and has been the key tactic and decisive moment of many battles throughout history. Modern charges usually involve small groups of fireteams equipped with weapons with a high rate of fire and striking against individual defensive positions, instead of large groups of combatants charging another group or a fortified line. 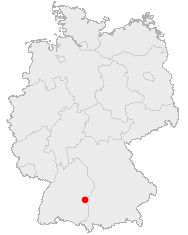 The Battle of Haslach-Jungingen, also known as the Battle of Albeck, fought on 11 October 1805 at Ulm-Jungingen north of Ulm at the Danube between French and Austrian forces, was part of the War of the Third Coalition, which was a part of the greater Napoleonic Wars. The outcome of this battle was a French victory.

The Battle of Khadki, also known as or The Battle of Ganeshkhind, took place at modern day Khadki, India on 5 November 1817 between the forces of the British East India Company and the Maratha Empire under the leadership of Appasaheb Bhonsle. The Company forces achieved a decisive victory, and Khadki later became a military cantonment under the British rule.

Dennis Bell was a Buffalo Soldier in the United States Army and a recipient of America's highest military decoration—the Medal of Honor—for his actions in the Spanish–American War.

Cilurnum or Cilurvum was a fort on Hadrian's Wall mentioned in the Notitia Dignitatum. It is now identified with the fort found at Chesters near the village of Walwick, Northumberland, England. It was built in 123 AD, just after the wall's completion.

The 8th Light Cavalry traces its origins from the 8th King George's Own Light Cavalry which was formed in 1922 by the amalgamation of the 26th King George's Own Light Cavalry and the 30th Lancers following a re-organisation of the Indian Cavalry Corps. Both regiments were regular cavalry units that had had long and distinguished records in the British Indian Army prior to their amalgamation. During World War II the regiment was converted into an armoured car unit and served during the Burma campaign. After India gained Independence the regiment was named 8th Light Cavalry.The regiment is the third oldest armoured regiment in India and is amongst the most highly decorated regiments in the country.

Sitabuldi Fort, site of the Battle of Sitabuldi in 1817, is located atop a hillock in central Nagpur, Maharashtra, India. this fort was built by a Gond king, Raja Bhakt Buland Shah in year 1702, then with some political reason or negotiation between bhosels and rajgonds this capital of gonwan kwon, so it is wrong to say that Sitabuldi Fort was built by bholes rather it was built by rajgond king. then just before he fought against the British East India Company during the Third Anglo-Maratha War. The area surrounding the hillock, now known as Sitabuldi, is an important commercial hub for Nagpur. To the south is Nagpur Railway Station and behind it is Tekdi Ganapati, a temple of Ganesha. The fort was a home to the Indian Army's 118th infantry battalion Grenadiers till 2019.

General of the Infantry is a military rank of a General officer in the infantry and refers to:

The Combat of Barquilla was a minor skirmish between British and French forces two days after the siege of Ciudad Rodrigo, in which Robert Craufurd attacked French grenadiers covering a foraging party. The French grenadiers, formed in a single square, made a fighting withdrawal, fending off British cavalry and escaping unscathed.