Susanna "Susan" Kohner is an American retired actress who worked in film and television. She played Sarah Jane in Imitation of Life (1959), for which she was nominated for an Oscar and won a Golden Globe award.

Guadalupe Natalia Tovar, known professionally as Lupita Tovar, was a Mexican-born American actress best known for her starring role in the 1931 Spanish-language version of Drácula, filmed in Los Angeles by Universal Pictures at night using the same sets as the Bela Lugosi version, but with a different cast and director. She also starred in the 1932 film Santa, one of the first Mexican sound films, and one of the first commercial Spanish-language sound films.

Mary Loretta Philbin was an American film actress of the silent film era, who is best known for playing the roles of Christine Daaé in the 1925 film The Phantom of the Opera opposite Lon Chaney, and as Dea in The Man Who Laughs alongside Conrad Veidt. Both roles cast her as the beauty in Beauty and the Beast-type stories.

La Saga, Negocio de Familia was a popular Colombian Soup Opera aired in 2004 By Caracol TV and currently airing on GenTV in South Florida. The show follows the history of the Manrique family, which was prominent in the underworld of Bogotá, Colombia. This telenovela is characterized by an unconventional plot; it is not a love story, but several stories of events that occur through five generations of the same family. Moreover, in this production there is no humor and the plot is marked by death, suffering and crime.

Dracula is a 1931 American horror film directed by George Melford. The film is based on both the novel Dracula by Bram Stoker and the play Dracula by Hamilton Deane and John L. Balderston. The film is about Renfield, who travels to Translyvania to visit Count Dracula. He is drugged by the Count and becomes his minion. The two travel to England, where Dracula begins to seduce Lucy Westenra as she becomes his first victim. This leads to Professor Van Helsing to investigate, who confirms that Count Dracula is a vampire. 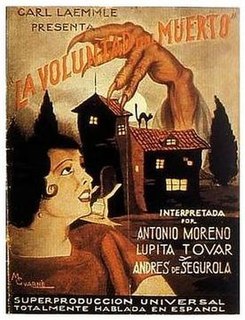 La Voluntad del Muerto is a Spanish-language version of The Cat Creeps (1930), both of which are now considered to be lost films.

The Fighting Gringo is a 1939 Western film directed by David Howard and featuring George O'Brien, Lupita Tovar and William Royle. The picture was produced under the RKO Pictures banner. Ben Johnson had a small uncredited early role as a Mexican barfly and did some work as a stuntman.

Carlos Villarías was a Spanish actor who was born in Córdoba, Spain, and died in California, United States. His most famous role is in the title role of the Spanish-language version of Dracula (1931), with Barry Norton and Lupita Tovar, filmed at night on the same sets as the English-language version starring Bela Lugosi.

Destino de Mujer is a Venezuelan telenovela created by Mariela Romero and produced in 1997 as a joint production of Venevisión and Televisión Española. The telenovela lasted for 136 episodes and was distributed internationally by Venevisión International. 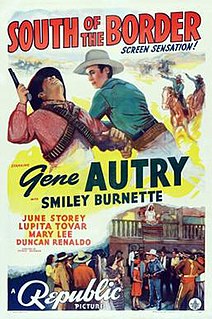 South of the Border is a 1939 Western film directed by George Sherman and starring Gene Autry, Smiley Burnette, and June Storey. Written by Betty Burbridge and Gerald Geraghty, based on a story by Dorrell and Stuart E. McGowan, the film is about a federal agent who is sent to Mexico to prevent foreign powers from gaining control of Mexican oil refineries and fomenting revolution among the Mexican people.

María Teresa is a 1972 Venezuelan telenovela written by Cuban writer Delia Fiallo and broadcast on Venevisión. The telenovela starred Lupita Ferrer and José Bardina as the main protagonists.

The Veiled Woman is a 1929 American drama film directed by Emmett J. Flynn and starring Lia Torá, Lupita Tovar and Walter McGrail, also featuring Bela Lugosi. This film was initially advertised as being a sound film, but at the last minute, the producer decided to film it as a silent instead. 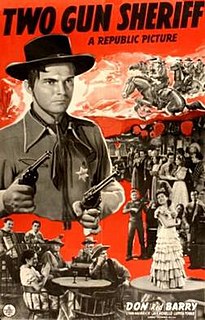 Broken Lives is a 1935 Spanish drama film directed by Eusebio Fernández Ardavín and starring Lupita Tovar, Maruchi Fresno and Enrique Zabala. Contracts with the crew were signed in Barcelona and Madrid in August and September 1934. Filming commenced in October of the same year at CEA Studios in Madrid. The film was produced by INCA Films, it was the company's first sound movie. The premier took place on 20 April 1935 in Cine Avenida. It was released in the United States in 1935.

The Crime Doctor's Courage is a 1945 American mystery film directed by George Sherman and starring Warner Baxter, Hillary Brooke and Jerome Cowan. It is part of the Crime Doctor series of films made by Columbia Pictures.

Michael Strogoff is a 1944 Mexican historical drama film directed by Miguel M. Delgado and starring Julián Soler, Lupita Tovar and Julio Villarreal. It is based on the 1876 novel Michael Strogoff by Jules Verne.