Across the Sierras is a 1941 American Western film directed by D. Ross Lederman and starring Bill Elliott. [1]

After six years in prison, Mitch Carew returns to Arroyo to seek his revenge on the two men who sent him to prison, shopkeeper Dan Woodworth and Wild Bill Hickok. Carew goads Woodworth into drawing a pistol allowing him to legally kill the elderly Woodworth in self-defence.

Meanwhile, Hickok rescues his ne'er do well friend Larry Armstrong from a lynch mob with the idea that both of them settle down on a ranch. Though Bill finds the love of an Eastern girl, the lure of adventure and the Code of the West lead the pair into trouble, gunplay and vengeance.

James Butler Hickok, better known as "Wild Bill" Hickok, was a folk hero of the American Old West known for his life on the frontier as a soldier, scout, lawman, gambler, showman, and actor, and for his involvement in many famous gunfights. He earned a great deal of notoriety in his own time, much of it bolstered by the many outlandish and often fabricated tales he told about himself. Some contemporaneous reports of his exploits are known to be fictitious, but they remain the basis of much of his fame and reputation.

Little Big Man is a 1970 American Western film directed by Arthur Penn and based on the 1964 novel Little Big Man by Thomas Berger. While broadly categorized as a western, or an epic, the film encompasses several literary/film genres, including comedy, drama and adventure. The film follows the life of a white man who was raised by members of the Cheyenne nation during the 19th century. The film is largely concerned with contrasting the lives of American pioneers and Native Americans throughout the progression of the boy's life. It stars Dustin Hoffman, Chief Dan George, Faye Dunaway, Martin Balsam, Jeff Corey and Richard Mulligan.

Buffalo Girls is a 1990 novel written by American author Larry McMurtry about Calamity Jane. It is written in the novel prose style mixed with a series of letters from Calamity Jane to her daughter. In her letters, Calamity describes herself as being a drunken hellraiser but never an outlaw. Her letters also describe her larger-than-life cohorts.

The Plainsman is a 1936 American Western film directed by Cecil B. DeMille and starring Gary Cooper and Jean Arthur. The film presents a highly fictionalized account of the adventures and relationships between Wild Bill Hickok, Calamity Jane, Buffalo Bill Cody, and General George Custer, with a gun-runner named Lattimer as the main villain. The film is notorious for mixing timelines and even has an opening scene with Abraham Lincoln setting the stage for Hickok's adventures. Anthony Quinn has an early acting role as an Indian. A remake using the same title was released in 1966. 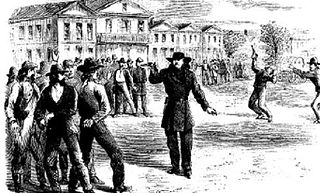 The Hickok–Tutt shootout was a gunfight that occurred on July 21, 1865, in the town square of Springfield, Missouri between Wild Bill Hickok and gambler Davis Tutt. It is one of the few recorded instances in the Old West of a one-on-one pistol quick-draw duel in a public place, in the manner later made iconic by countless dime novels, radio dramas, and Western films such as High Noon. The first story of the shootout was detailed in an article in Harper's Magazine in 1867, making Hickok a household name and folk hero.

The Great Adventures of Wild Bill Hickok (1938) is a Columbia Pictures movie serial. It was the fourth of the 57 serials released by Columbia and the studio's first Western serial. The serial was the first to be produced by Columbia personnel; Columbia's previous three serials had been produced by the independent Weiss Brothers company, using Columbia's facilities. 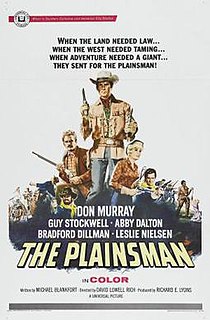 The Plainsman is a 1966 American Western film directed by David Lowell Rich and starring Don Murray and Guy Stockwell. remake of the 1936 Cecil B. DeMille film of the same name.

Wild Bill Elliott was an American film actor. He specialized in playing the rugged heroes of B Westerns, particularly the Red Ryder series of films.

Martha Jane Cannary, better known as Calamity Jane, was an American frontierswoman, sharpshooter, and raconteur. In addition to many exploits she was known for being an acquaintance of Wild Bill Hickok. Late in her life, she appeared in Buffalo Bill's Wild West show and at the 1901 Pan-American Exposition. She is said to have exhibited compassion to others, especially to the sick and needy. This facet of her character contrasted with her daredevil ways and helped to make her a noted frontier figure. She was also known for her habit of wearing men's attire.

Evelyn Ebersis Young was an American film actress. At the height of her career in 1940, she appeared in 9 feature films. She was the leading female actress in The Wildcat of Tucson and Prairie Schooners, playing alongside Wild Bill Elliott and Dub Taylor in a Wild Bill Hickok series. 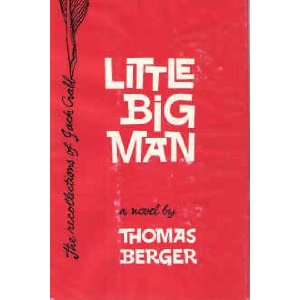 Little Big Man is a 1964 novel by American author Thomas Berger. Often described as a satire or parody of the western genre, the book is a modern example of picaresque fiction. Berger made use of a large volume of overlooked first-person primary materials, such as diaries, letters, and memoirs, to fashion a wide-ranging and entertaining tale that comments on alienation, identity, and perceptions of reality. Easily Berger's best known work, Little Big Man was made into a popular 1970 film by Arthur Penn. It has been called "Berger's response to the great American myth of the frontier, representing as it does most of the central traditions of American literature."

The Conquerors is a 1932 American pre-Code Western film that spans several generations in a family that lives through a series of financial crises with faith in the future of the country. It was directed by William A. Wellman, and stars Richard Dix and Ann Harding as a young couple who move from New York City to the American West and build a banking empire.

Wild Bill Hickok Rides is a 1942 American Western film directed by Ray Enright and starring Constance Bennett, Bruce Cabot and Warren William. Bennett was paid $10,000 for her appearance, a significant drop from what she had recently been earning. Cabot is one of a number of actors to have played Wild Bill Hickok on screen.

The Wildcat of Tucson is a 1940 American Western film directed by Lambert Hillyer and starring Bill Elliott as "Wild Bill" Hickok and Evelyn Young as Vivian Barlow. 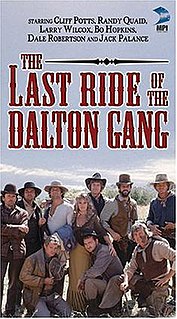 The Last Ride of the Dalton Gang is a 1979 American Western television film directed by Dan Curtis about the Dalton Gang. It is not entirely accurate, as noted at the film's beginning.

Hands Across the Rockies is a 1941 American Western film directed by Lambert Hillyer and starring Bill Elliott.