The Body Disappears is a 1941 American comedy film directed by D. Ross Lederman and starring Jeffrey Lynn and Jane Wyman. [1]

Unconscious after his bachelor party, Peter De Haven (Jeffrey Lynn) is transported by his friends to the college dissecting room as a practical joke. Professor Shotesbury (Edward Everett Horton) mistakenly injects him with a serum that makes him invisible. While invisible, De Haven learns that his fiancee, Christine (Marguerite Chapman), is only marrying him for his money. He also falls in love with Shotesbury's daughter, Joan (Jane Wyman). Meanwhile, Shotesbury is committed to a sanitarium by his colleagues for his claims about invisible monkeys and men. De Haven and Joan, by this time also invisible, go to release Shotesbury from the mental hospital, which they achieve by making him invisible as well. All the while time is running out for De Haven to receive an antidote. In the end, all receive the antidote, and De Haven ends up with Joan. [2] 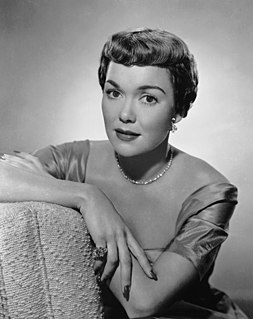 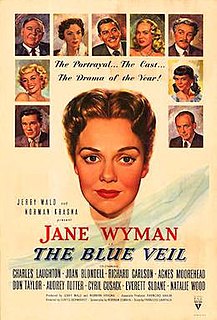 The Blue Veil is a 1951 American historical drama film directed by Curtis Bernhardt and starring Jane Wyman, Charles Laughton and Joan Blondell. It tells the story of a woman who spends her life caring for other people’s children, beginning just after World War I. The title refers to the headdresses once worn by governesses and nannies, colored blue to distinguish them from the white veils worn by medical nurses. The screenplay by Norman Corwin is based on a story by François Campaux, adapted for the French-language film Le Voile Bleu in 1942. 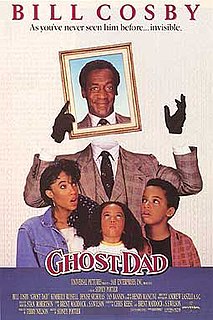 Ghost Dad is a 1990 American fantasy comedy film directed by Sidney Poitier and starring Bill Cosby, in which a widower's spirit is able to communicate with his children after his death. It was critically panned and a box office bomb. 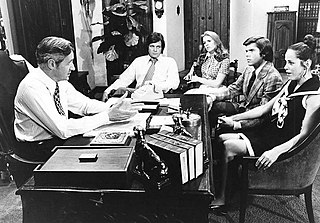 Owen Marshall, Counselor at Law is an American legal drama, jointly created by David Victor and former law professor Jerry McNeely, that starred Arthur Hill. The series was broadcast on ABC from 1971 to 1974; Victor and McNeely produced it under the "Groverton Productions" banner through Universal Television, then an MCA company. A two-hour pilot movie, titled "A Pattern of Morality," had aired as a 1971 ABC Movie of the Week entry prior to the beginning of the series run.

William DeWolf Hopper Jr. was an American stage, film, and television actor. The only child of actor DeWolf Hopper and actress and Hollywood columnist and blacklist proponent Hedda Hopper, he appeared in predominantly minor roles in more than 80 feature films in the 1930s and 1940s. After serving in the United States Navy during World War II, he left acting, but in the mid-1950s, he was persuaded by director William Wellman to resume his film career. He became best known for his work as private detective Paul Drake in the CBS television series Perry Mason.

Jeffrey Lynn was an American stage-screen actor and film producer who worked primarily through the Golden Age of Hollywood establishing himself as one of the premier talents of his time. Throughout his acting career, both on stage and in film, he was typecast as "the attractive, reliable love interest of the heroine," or "the tall, stalwart hero."

London Suite is a play by Neil Simon, consisting of four one-act plays. London Suite also was a 1996 television movie. It is in a similar style to Simon's earlier works Plaza Suite and California Suite.

Thank Your Lucky Stars is a 1943 American musical comedy film made by Warner Brothers as a World War II fundraiser, with a slim plot involving theater producers. The stars donated their salaries to the Hollywood Canteen, which was founded by John Garfield and Bette Davis, who appear in this film. It was directed by David Butler and stars Eddie Cantor, Dennis Morgan, Joan Leslie, Edward Everett Horton and S.Z. Sakall. 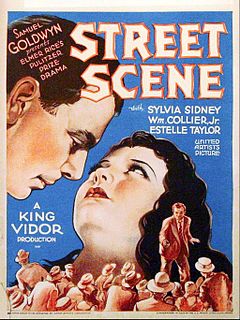 Street Scene is a 1931 American pre-Code drama film produced by Samuel Goldwyn and directed by King Vidor. With a screenplay by Elmer Rice adapted from his Pulitzer Prize-winning play of the same name, Street Scene takes place on a New York City street from one evening until the following afternoon. Except for one scene which takes place inside a taxi, Vidor shot the entire film on a single set depicting half a city block of house fronts. 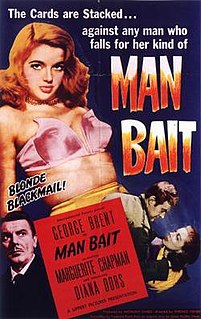 The King and the Chorus Girl is a 1937 American romantic comedy film directed by Mervyn LeRoy and starring Fernand Gravey, Joan Blondell and Edward Everett Horton.

My Love Came Back is a 1940 American comedy-drama film directed by Curtis Bernhardt and starring Olivia de Havilland, Jeffrey Lynn, Eddie Albert, and Jane Wyman. Based on the 1935 Austrian film Episode written and directed by Walter Reisch, the film is about a gifted young violinist who considers leaving a prestigious music academy to play in a jazz band to earn money. The academy's new president—a distinguished wealthy patron of the arts—convinces her to stay after secretly arranging a scholarship for her out of his own pocket, and the two begin attending concerts together. Complications arise when he asks his young business manager to take his place at one of the concerts. The film is notable for Heinz Eric Roemheld's musical direction and Ray Heindorf's unique swing orchestral arrangements of classical pieces. My Love Came Back was released by Warner Bros. Pictures in the United States on July 13, 1940.

The Sap is a 1929 American comedy film directed by Archie Mayo and written by De Leon Anthony and Robert Lord. It is based on the 1924 play The Sap by William A. Grew. The film stars Edward Everett Horton, Alan Hale Sr., Patsy Ruth Miller, Russell Simpson, Jerry Mandy and Edna Murphy. The film was released by Warner Bros. on November 9, 1929.