Out of the Depths is a 1945 American war drama film directed by D. Ross Lederman. [1]

At the end of World War II, a U.S. Navy submarine receives an order to bring aboard Ito Kaita, a Korean American intelligence agent who joined with the resistance movement in Japanese-occupied Korea. The crew enthusiastically receives news of the surrender of Japan but gets into a skirmish with an Imperial Japanese Navy battleship refusing to surrender. After being rescued, Kaita informs the crew that a rogue Japanese aircraft carrier will attack the surrender ceremony aboard the USS Missouri in Tokyo Bay. A kamikaze attack from the rogue carrier destroys the submarine's antenna before they can warn their superiors. Captain Faversham is killed trying to fix it, and the submarine begins to sink and fill with chlorine after being hit. The crew decide to stop the carrier by ramming their submarine into it, and both ships explode. The four surviving men receive the Congressional Medal of Honor at the White House. 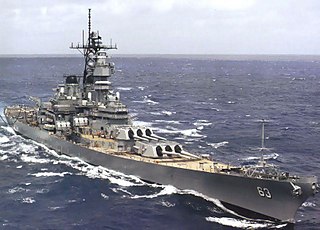 USS Missouri (BB-63) is an Iowa-class battleship and was the third ship of the United States Navy to be named after the U.S. state of Missouri. Missouri was the last battleship commissioned by the United States and is best remembered as the site of the surrender of the Empire of Japan, which ended World War II.

USS Boxer was one of 24 Essex-class aircraft carriers of the United States Navy, and the fifth ship to be named for HMS Boxer. She was launched on 14 December 1944 and christened by the daughter of a US Senator from Louisiana.

USS Essex (CV/CVA/CVS-9) was an aircraft carrier and the lead ship of the 24-ship Essex class built for the United States Navy during World War II. She was the fourth US Navy ship to bear the name. Commissioned in December 1942, Essex participated in several campaigns in the Pacific Theater of Operations, earning the Presidential Unit Citation and 13 battle stars. Decommissioned shortly after the end of the war, she was modernized and recommissioned in the early 1950s as an attack carrier (CVA), eventually becoming an antisubmarine aircraft carrier (CVS). In her second career, she served mainly in the Atlantic, playing a role in the Cuban Missile Crisis. She also participated in the Korean War, earning four battle stars and the Navy Unit Commendation. She was the primary recovery carrier for the Apollo 7 space mission.

USS Archerfish (SS/AGSS-311) was a Balao-class submarine. She was the first ship of the United States Navy to be named for the archerfish. Archerfish is best known for sinking the Japanese aircraft carrier Shinano in November 1944, the largest warship ever sunk by a submarine. For this achievement, she received a Presidential Unit Citation after World War II. 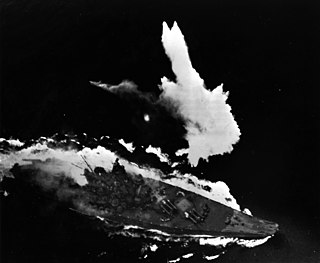 Operation Ten-Go, also known as Operation Heaven One, was the last major Japanese naval operation in the Pacific Theater of World War II. The resulting engagement is also known as the Battle of the East China Sea. 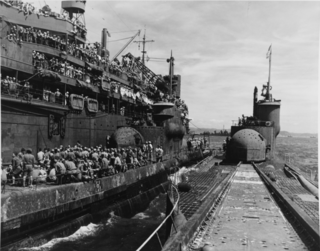 I-400 was an Imperial Japanese Navy Sentoku-type submarine commissioned in 1944 for service in World War II. Capable of carrying three two-seat Aichi M6A1 "Seiran" float-equipped torpedo bombers, the Sentoku-class submarines were built to launch a surprise air strike against the Panama Canal. Until 1965, the Sentaku-type submarines—I-400 and her sister ships I-401 and I-402 —were the largest submarines ever commissioned. 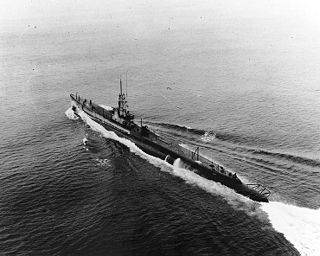 USS Pomfret (SS-391), a Balao-class submarine, was a ship of the United States Navy named for the pomfret, a fish of the seabream family which is a powerful and speedy swimmer, capable of operating at great depths. 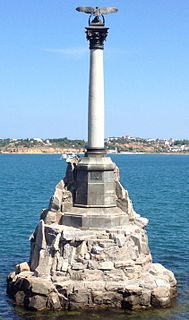 Scuttling is the deliberate sinking of a ship. Scuttling may be performed to dispose of an abandoned, old, or captured vessel; to prevent the vessel from becoming a navigation hazard; as an act of self-destruction to prevent the ship from being captured by an enemy force ; as a blockship to restrict navigation through a channel or within a harbor; to provide an artificial reef for divers and marine life; or to alter the flow of rivers. 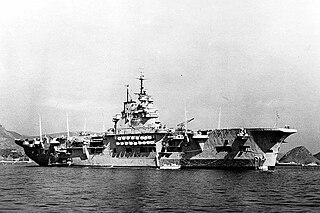 HMS Unicorn was an aircraft repair ship and light aircraft carrier built for the Royal Navy in the late 1930s. She was completed during World War II and provided air cover over the amphibious landing at Salerno, Italy, in September 1943. The ship was transferred to the Eastern Fleet in the Indian Ocean at the end of the year. Unicorn supported the aircraft carriers of the fleet on their operations until the British Pacific Fleet (BPF) was formed in November 1944. She was transferred to Australia in early 1945 to support the BPF's operations during Operation Iceberg, the Allied invasion of Okinawa in May. To shorten the time required to replenish the BPF's carriers, the ship was based in the Admiralty Islands and in the Philippine Islands until the Japanese surrender in August. Unicorn was decommissioned and placed in reserve when she returned to the UK in January 1946.

I-401 was an Imperial Japanese Navy Sentoku-type submarine commissioned in 1945 for service in World War II. Capable of carrying three two-seat Aichi M6A1 "Seiran" float-equipped torpedo bombers, the Sentoku-class submarines were built to launch a surprise air strike against the Panama Canal. Until 1965, the Sentaku-type submarines — I-401 and her sister ships I-400 and I-402 — were the largest submarines ever commissioned.

George John Dufek was an American naval officer, naval aviator, and polar expert. He served in World War II and the Korean War and in the 1940s and 1950s spent much of his career in the Antarctic, first with Admiral Byrd and later as supervisor of U.S. programs in the South Polar regions. Rear Admiral Dufek was the director of the Mariners' Museum in Newport News, Virginia after his retirement from the Navy in 1959.

Helicopter Sea Combat Squadron 14 (HSC-14) "Chargers" is an aviation unit of the United States Navy based at Naval Air Station North Island, California (USA). HSC-14 was established as Helicopter Anti-Submarine Squadron 14 (HS-14) in 1984 and was redesignated HSC-14 in 2013. The squadron is equipped with the Sikorsky MH-60S Seahawk. 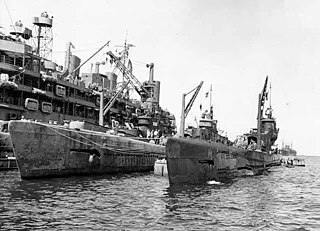 I-14 was an Imperial Japanese Navy Type AM submarine that served during World War II. Designed as a submarine aircraft carrier, she was commissioned in March 1945. She surrendered in August 1945 and was sunk as a target in 1946. 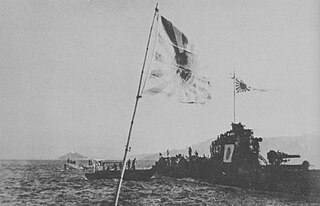 I-47 was the second of three Type C cruiser submarines of the C2 sub-class built for the Imperial Japanese Navy. Commissioned in July 1944, she operated as a kaiten manned suicide attack torpedo carrier during the final year of World War II. Surrendered at the end of the war, she was scuttled by the United States Navy in 1946.