The explosions killed 11 military personnel: four soldiers of the Blues & Royals at Hyde Park, and seven bandsmen of the Royal Green Jackets at Regent's Park. Seven of the Blues & Royals' horses also died in the attack. One seriously injured horse, Sefton, survived and was subsequently featured on television programmes and was awarded "Horse of the Year". [1]

In 1987, Gilbert "Danny" McNamee was convicted of making the Hyde Park bomb and jailed for 25 years. He served 12 years before being released under the terms of the Good Friday Agreement; his conviction was later quashed. [2] In 2013, John Downey was charged with four counts of murder in relation to the Hyde Park attack; his trial began in January 2014 but collapsed the following month after a ruling upon a letter sent to him by police assuring him that he would not be prosecuted over the attack. On 18 December 2019 the High Court ruled, in a civil case, that John Downey was an "active participant" in the bombing. [3]

No one has ever been charged in connection with the Regent's Park bombing. [2]

At 10:40 am, [1] a nail bomb exploded in the boot of a blue Morris Marina parked on South Carriage Drive in Hyde Park. [4] The bomb comprised 25 lb (11 kg) of gelignite and 30 lb (14 kg) of nails. [4] It exploded as soldiers of the Household Cavalry, Queen Elizabeth II's official bodyguard regiment, were passing. They were taking part in their daily Changing of the Guard procession from their barracks in Knightsbridge to Horse Guards Parade. [5] Three soldiers of the Blues & Royals were killed outright, and another, their standard-bearer, died from his wounds three days later. [4] The other soldiers in the procession were badly wounded, and a number of civilians were injured. [4] Seven of the regiment's horses were also killed or had to be euthanised because of their injuries. [4] [6] Explosives experts believed that the Hyde Park bomb was triggered by remote by an IRA member inside the park. [4] [6]

The second attack happened at about 12:55 pm, [2] when a bomb exploded underneath a bandstand in Regent's Park. Thirty Military bandsmen of the Royal Green Jackets were on the stand performing music from Oliver! to a crowd of 120 people. [6] [2]

It was the first in a series of advertised lunchtime concerts there. [2] Six of the bandsmen were killed outright and the rest were wounded; a seventh died of his wounds on 1 August. At least eight civilians were also injured. [2] The bomb had been hidden under the stand some time before and triggered by a timer. [6] Unlike the Hyde Park bomb, it contained no nails and seemed to be designed to cause minimal harm to bystanders. [2]

The seven horses of the Blues and Royals that were killed were Cedric, Epaulette, Falcon, Rochester, Waterford, Yeastvite and Zara. [7]

At least 51 people were injured, [8] and a total of 22 people were admitted to hospital as a result of the blasts: 18 soldiers, a police officer, and three civilians. [4] The IRA claimed responsibility for the attacks by deliberately mirroring Prime Minister Margaret Thatcher's words a few months before when Britain entered the Falklands War. They proclaimed that: "The Irish people have sovereign and national rights which no task or occupational force can put down". [2] Reacting to the bombing, Thatcher stated: "These callous and cowardly crimes have been committed by evil, brutal men who know nothing of democracy. We shall not rest until they are brought to justice. [9]

The bombings weakened public support in the United States for the Irish republican cause. [2]

Sefton, a horse that survived the attack at Hyde Park despite suffering serious wounds, became famous after appearing in many television shows and was awarded Horse of the Year. [1] Sefton's rider at the time of the bombing, Michael Pedersen, survived but believed he suffered from post-traumatic stress disorder; after splitting from his wife he committed suicide in September 2012 after killing two of his children. [10]

A memorial marks the spot of the Hyde Park bombing; and the troop honours it daily with an eyes-left and salute with drawn swords. [11] A plaque commemorating the victims of the second attack stands in Regent's Park. [12]

In October 1987, 27-year-old Gilbert "Danny" McNamee, from County Armagh, was sentenced at the Old Bailey to 25 years in prison for his role in the Hyde Park bombing and others. In December 1998, shortly after his release from Maze prison under the Good Friday Agreement, three Court of Appeal judges quashed his conviction, deeming it "unsafe" because of withheld fingerprint evidence that implicated other bomb-makers. They stated that though the conviction was unsafe it did not mean McNamee was necessarily innocent of the charge. [13]

On 19 May 2013, 61-year-old John Anthony Downey, from County Donegal, was charged with murder in relation to the Hyde Park bomb and intending to cause an explosion likely to endanger life. He appeared by videolink from Belmarsh prison for a bail hearing at the Old Bailey on 24 May and did not apply for bail so was remanded in custody. [14] At a hearing on 1 August 2013, Downey was granted conditional bail and a trial was scheduled for January 2014. [15]

On 24 January 2014, Downey appeared at the Old Bailey for the beginning of his trial; he entered a not guilty plea on the four murder charges and the charge of intending to cause an explosion. [16] On 25 February 2014, it was revealed that Downey's trial had collapsed after the presiding judge had ruled, on 21 February, upon a letter sent by the Police Service of Northern Ireland to Downey in 2007, assuring him that he would not face criminal charges over the attack. Although the assurance was made in error and the police realised the mistake, it was never withdrawn, and the judge ruled that therefore the defendant had been misled and prosecuting him would be an abuse of executive power. [17] Downey is one of 187 IRA suspects who received secret on-the-run letters guaranteeing them unofficial immunity from prosecution. [17] [18] In December 2019 the High Court ruled in a civil action against Downey by the family of a victim that he had been an "active participant" in the Hyde Park bombing, subject to a claim for damages. [19]

The Royal Regiment of Horse Guards (RHG) was a cavalry regiment of the British Army, part of the Household Cavalry. 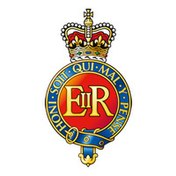 The Blues and Royals (RHG/D) is a cavalry regiment of the British Army, part of the Household Cavalry. The Colonel-in-Chief is Queen Elizabeth II and the Colonel of the Regiment is Anne, Princess Royal. It is the second-most senior regiment in the British Army. 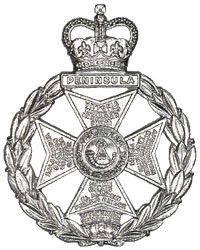 The Royal Green Jackets (RGJ) was an infantry regiment of the British Army, one of two "large regiments" within the Light Division.

Brigadier Andrew Henry Parker Bowles is a retired British Army officer. He is the former husband of Camilla, Duchess of Cornwall, a member of the British royal family.

The Glenanne barracks bombing was a large truck bomb attack carried out by the Provisional IRA against a British Army base at Glenanne, near Mountnorris, County Armagh. The driverless lorry was rolled down a hill at the rear of the barracks and crashed through the perimeter fence. The bombing took place on 31 May 1991 and left three soldiers killed and 14 people wounded, four of them civilians. 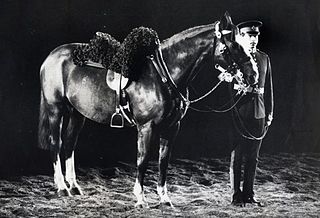 Sefton (1963–1993) was a British Army horse who served for 17 years from 1967 to 1984, coming to prominence when he was critically injured in the Hyde Park and Regent's Park bombings which, combined, killed seven other horses and eleven people. He recovered sufficiently to return to active service and was subsequently awarded "Horse of the Year". Sefton became one of the first horses to be placed in the British Horse Society's equestrian Hall of Fame, and with an annual award named after him.

The Household Cavalry Composite Regiment was a temporary, wartime-only, cavalry regiment of the British Army consisting of personnel drawn from the 1st Life Guards, 2nd Life Guards and Royal Horse Guards. It was active in 1882 for service in the Anglo-Egyptian War, in 1889–1900 during the Second Boer War, from August to November, 1914 during the opening months of World War I and in World War II.

The 7th Cavalry Brigade was a cavalry brigade of the British Army. It served in the Napoleonic Wars, notably at the Battle of Waterloo. It was reformed in 1914 and served on the Western Front as part of the 3rd Cavalry Division until the end of World War I.

The New Year Honours 1915 were appointments by King George V to various orders and honours to reward and highlight good works by members of the British Empire. They were announced on 1 January 1915.

The 1994 Heathrow mortar attacks were a series of homemade mortar bomb attacks targeted at Heathrow Airport carried out by the Provisional IRA. Over a five-day period, Heathrow was targeted three times by the IRA, which fired 12 mortar rounds. Heathrow was a symbolic target due to its importance to the United Kingdom's economy, and much disruption was caused when areas of the airport were closed over the period due to the IRA attacks. The gravity of the incident was heightened by the fact that Queen Elizabeth II was being flown back to Heathrow by the RAF on 10 March.

The Chelsea Barracks bombing was a remote controlled nail bomb attack carried out by a London-based Active Service Unit of the Provisional IRA on 10 October 1981. The bomb targeted a bus carrying British Army soldiers just outside Chelsea Barracks. The blast killed two civilians and injured 40 people.

The Clive Barracks bombing was a bomb attack carried out by the Provisional Irish Republican Army on 20 February 1989 on a British Army barracks called Clive Barracks at Ternhill, Shropshire. The attack injured two soldiers from the Parachute Regiment, and destroyed a large part of the barracks.