Juan Leovigildo Brouwer Mezquida (born March 1, 1939) is a Cuban composer, conductor, and classical guitarist. He is a Member of Honour of the International Music Council. [1]

He is the grandson of Cuban composer Ernestina Lecuona y Casado. [2] His great-uncle, Ernesto Lecuona, composed "La Malagueña" and his second cousin, Margarita Lecuona, composed "Babalú", which was popularized by Cuban musician and actor Desi Arnaz. [3]

Brouwer was born in Havana. When he was 13, he began classical guitar with the encouragement of his father, who was an amateur guitarist. His teacher was Isaac Nicola, who was a student of Emilio Pujol, who was himself a student of Francisco Tárrega. At age 17 he performed publicly for the first time and began composing. [4]

Brouwer went to the United States to study music at the Hartt College of Music of the University of Hartford, and later at the Juilliard School, [4] where he studied under Vincent Persichetti and took composition classes with Stefan Wolpe.

In 1970 Brouwer played in the premiere of El Cimarrón by Hans Werner Henze in Berlin. Together with Morton Feldman, he was awarded a 1972 scholarship by the DAAD (German Academic Exchange Service) and to work as a guest composer and lecturer at the Academy of Science and Arts of Berlin. In Germany Brouwer also recorded a number of LPs for Deutsche Grammophon. [5] [6] [7] [8] [9] [10] [9]

In his early compositions, Brouwer remained close to the rhythms of Cuban music, while later he was drawn to aleatoric music. During the 1960s and 70s, he became interested in the music of modernist composers such as Luigi Nono and Iannis Xenakis, using indeterminacy in works such as Sonograma I. Other works from this period include the guitar pieces Canticum (1968), La espiral eterna (1971), Parábola (1973) and Tarantos (1974). More recently, Brouwer's works have leaned towards tonality and modality. The solo guitar works El Decamerón Negro (1981), Paisaje cubano con campanas (1986), and the Sonata (1990; for Julian Bream) exemplify this tendency. His playing career ended in the early 1980s due to an injury to a tendon in his right hand middle finger. [11] [12]

Brouwer has written for guitar, piano, and percussion, and has composed orchestral works, ballet, and music for over one hundred movies, including the film Like Water for Chocolate . [3] For a guitar competition in Hungary in 1979, he wrote a composition that employed 200 guitarists. He is known for a series of studies called the Etudes Simples. [4] Brouwer has also transcribed Beatles songs for classical guitar. [3]

He has been a conductor for many symphony orchestras, including the BBC Concert Orchestra, the Berlin Philharmonic, and the Cordoba Symphony in Spain. [4]

Brouwer is a member of the Communist Party of Cuba, and has held a number of official posts in Cuba, including with the music department of the Cuban Institute of Cinematographic Art and Industry.

Ernesto Lecuona y Casado was a Cuban composer and pianist of worldwide fame. He composed over six hundred pieces, mostly in the Cuban vein, and was a pianist of exceptional skill. His father was Canarian and his mother was Cuban.

Rafael Argelio Lecuona was from 1944 to 1955 a member of the Cuban gymnastics team and from 1970 to 2002 a political science professor at Texas A&M International University in Laredo, Texas. He competed in the Pan American Games in Buenos Aires (1951) and Mexico City (1955), in three consecutive Olympic Games from 1948 to 1956, and he was a member of the Florida State University men's gymnastics team from 1953 to 1956. 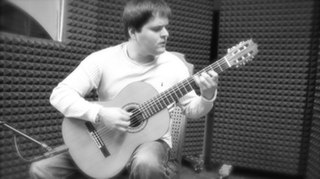 Yalil Guerra is a Cuban composer and guitarist.

El Cimarrón is a composition by the German composer Hans Werner Henze, written when the composer lived in Cuba in 1969–1970. It is subtitled Biographie des geflohenen Sklaven Esteban Montejo, and the libretto by Hans Magnus Enzensberger is based on the oral autobiography related in 1963 to Miguel Barnet by Montejo, who was also a veteran of the Cuban War of Independence (1895–98). See also: Cimarron (people).

Isaac Nicola Romero was a prominent Cuban guitarist and one of the founders of the modern Cuban Guitar School. He was also brother of Clara (Cuqui) Nicola.

The Quaternaglia Guitar Quartet (QGQ) is a classical guitar ensemble from São Paulo, Brazil, founded in 1992. The Quartet has become a reference both for its artistic excellence and for its contributions to the expansion of the guitar quartet repertoire. Quaternaglia has developed a canon of original pieces and arrangements with the collaboration of a variety of composers such as Egberto Gismonti, Leo Brouwer, Javier Farías, Sérgio Molina, Almeida Prado, Paulo Bellinati and Marco Pereira Quaternaglia’s current members are Sidney Molina, Thiago Abdalla, Fabio Ramazzina and Chrystian Dozza.

Ernesto Tamayo was a Cuban classical guitarist who toured extensively throughout North and South America and Europe.

Joaquín Clerch is a classical guitarist and composer. He was a close friend and protégé of Cuban guitarist and composer Leo Brouwer. Clerch's composition Yemaya won first prize in both the 1987 National Cuban Composition Competition and the 1987 Toronto International Guitar Competition. He currently resides in Düsseldorf, Germany where he is a Professor of Guitar at the Robert-Schumann-Hochschule Düsseldorf.

Roberto Valera Chamizo is a Cuban composer and pedagogue that has a made a substantial contribution to the development of music in Cuba.

The guitar was the first instrument that was heard in Cuba after the conch horns, flutes and drums that the original aborigines used to play; as it was documented by Spanish chroniclers such as Bernal Díaz del Castillo.. Through the centuries, the guitar has continued to be one of the most important and cherished instruments in Cuba, both in the practice of popular music as well as in the classical music tradition. Founded by renowned professors such as Clara Romero, Isaac Nicola, Clara (Cuqui) Nicola, Carlos Molina (guitarist), and Marta Cuervo Riverón, the Cuban guitar school has acquired an excellent international reputation since the 20th century, represented by important instrumentalists and composers such as Leo Brouwer, Carlos Molina (guitarist), José Rey de la Torre, Juan Antonio Mercadal and Joaquín Clerch, among many others.

After its arrival in Cuba at the end of the 18th century, the pianoforte rapidly became one of the favorite instruments among the Cuban population. Along with the humble guitar, the piano accompanied the popular Cuban guarachas and contradanzas at salons and ballrooms in Havana and all over the country.

Carlos Molina is a Cuban guitarist and professor.

Alejandro González González is a Cuban musician, guitarist and professor with notable work in the Dominican Republic.

Marcos Madrigal is a Cuban pianist.

Martín Pedreira is a Cuban guitarist, composer and professor.

Arnaud Dumond is a French classical guitarist, composer and teacher.