This is a list of airports in Guatemala , sorted by location.

Guatemala, officially the Republic of Guatemala (Spanish : República de Guatemala), is a country in Central America bordered by Mexico to the north and west, the Pacific Ocean to the southwest, Belize to the northeast, the Caribbean to the east, and Honduras and El Salvador to the southeast. Its capital in Guatemala City.

Spanish or Castilian, is a Romance language that originated in the Castile region of Spain and today has hundreds of millions of native speakers in Spain the Americas. It is a global language and the world's second-most spoken native language, after Mandarin Chinese.

There are numerous unauthorized airstrips used to facilitate drug trafficking in the region, with as many as 66 such airstrips in the vicinity of the Maya Biosphere Reserve alone. [1] 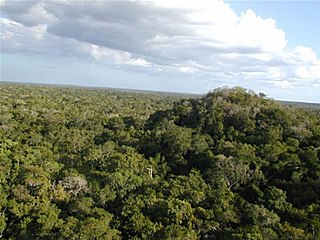 The Guatemalan Air Force is a small air force composed mostly of U.S.-made aircraft throughout its history. The FAG is a subordinate to the Guatemalan Military and its commanding officer reports to the Defence Minister.

UN/LOCODE, the United Nations Code for Trade and Transport Locations, is a geographic coding scheme developed and maintained by United Nations Economic Commission for Europe (UNECE). UN/LOCODE assigns codes to locations used in trade and transport with functions such as seaports, rail and road terminals, airports, Postal Exchange Office and border crossing points. The first issue in 1981 contained codes for 8,000 locations. The version from 2011 contained codes for about 82,000 locations.