Last updated January 17, 2020
This article is about the township. For other uses, see Liversedge (disambiguation).

Liversedge is a township in the former parish of Birstall, [1] in the metropolitan borough of Kirklees, West Yorkshire, England. Historically part of the West Riding of Yorkshire, Liversedge lies between Cleckheaton and Heckmondwike. The Kirklees ward is now called Liversedge and Gomersal with a population at the 2011 Census of 19,420. [2]

Liversedge comprises several settlements that are all distinctive. Norristhorpe clings to one side of the Spen Valley, looking over the town of Heckmondwike. Roberttown is on the opposite side of the A62. Millbridge is the geographical centre of Liversedge and, with the neighbouring village of Flush, is the place the mills of the woollen industry stood. Towards Cleckheaton are Hightown, Littletown and Popeley Hill.

Liversedge is recorded in the Domesday Book as Livresec, a manor belonging to Radulf, a vassal of Ilbert de Lacy. There are two possible etymologies for the name: from the Old English Lēofheres-ecg meaning 'a ridge or edge belonging to Lēofhere'; [3] [4] [5] or, alternatively, the first element could have originally been *Lēfer-, related to the Old English word lifer used in the sense of 'thick clotted water', and the second element secg, 'a bed of reeds or rushes'. [5]

In the 15th century, the lord of the manor was a member of the Neville family and Liversedge was already involved in woollen manufacture. The trade grew and by the 19th century the town was busy in the manufacture of woollen goods. In 1812 the town was the scene of a Luddite attack [6] on Rawfold's Mill when approximately two hundred armed weavers, croppers and other artisans attempted to destroy cropping frames at a mill operated by William Cartwright. Two Luddites were killed and some were injured by four soldiers and armed workmen defending the mill, with no losses on Cartwright's side. [7] In 2012, Sparrow Park was constructed outside the former town hall at the top of Knowler Hill in commemoration of the 200th anniversary of the uprising, which began just up the road from the monument in the still-operational "Shears" pub. [8]

Liversedge has a church that was built at the time of the Battle of Waterloo. Healds Hall, formerly the Spenborough Museum, is now a hotel. In the days of Charlotte Brontë it was home to Hammond Roberson whom she transformed into the Reverend Matthewman Helstone in her novel Shirley .

There is only one road sign in the whole area directing motorists towards Liversedge:[ citation needed ] on the A649 Halifax Road from Bailiff Bridge, with no directions from either the Huddersfield or Dewsbury and Batley sides of the settlement.

Politically, for Kirklees Council, the Leeds/Huddersfield Road acts as a boundary between electoral wards. Roberttown, Hightown and Littletown are within the Liversedge and Gomersal ward, while Norristhorpe and Flush are part of the Heckmondwike ward.

Liversedge F.C. are a football club in the football league pyramid, playing in the Northern Counties East Football League Premier Division for the 2017–18 season. They play at Clayborn, 0.6 miles (1 km) from Cleckheaton town centre.

There are also many Sunday League football teams in and around Liversedge playing in the Heavy Woollen Sunday League.

Liversedge Cricket Club play at Roberttown Lane near to the New Inn and play in the Central Yorkshire League.

In the late 19th century, and before the 1895 schism, Harry Varley, and Bob Wood played rugby union for England, and Liversedge FC, who were founded in 1877. When the rugby football schism occurred in 1895, Liversedge F.C. became founder members of the Northern Rugby Football Union (now Rugby Football League). Liversedge F.C. played for seven seasons from the 1895–96 season through to the end of 1901–02 season, they finished 15th of 22 in the initial combined league, and then 11th, 16th, 15th, 16th, and 16th of 16, and finally 14th of 14, in the Yorkshire Senior Competition, after which they withdrew from the Northern Rugby Football Union. Rugby league in the town is now represented by Liversedge ARLFC, who play behind Spenborough Swimming Pool off Bradford Road and currently play in the Third Division of the Pennine Amateur Rugby League pyramid.

Batley is a town in the Metropolitan Borough of Kirklees, West Yorkshire, England. It lies 7 miles (11 km) south-east of Bradford, 7 miles (11 km) south-west of Leeds and 1 mile (2 km) north of Dewsbury, near the M62 motorway. Historically in the West Riding of Yorkshire, in 2011 its two wards had a combined population of 38,573. Other nearby towns include: Morley to the north-east, Ossett to the south-east and Brighouse west-south-west. Batley is part of a special EU transformation zone.

Gomersal is a village in Kirklees in the metropolitan county of West Yorkshire, England. It is south of Bradford, east of Cleckheaton, north of Heckmondwike and close to the River Spen. It was originally divided into 'Great Gomersal' and Little Gomersal which has retained its diminutive.

Red House Museum was a historic house museum, built in 1660 and renovated in the Georgian era. It closed to the public at the end of 2016 but remains as a Grade II* listed building in Gomersal, Kirklees, West Yorkshire, England. 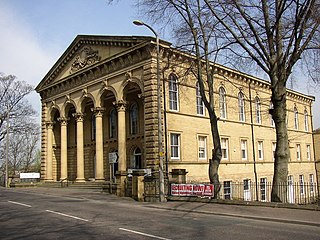 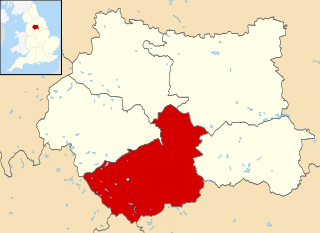 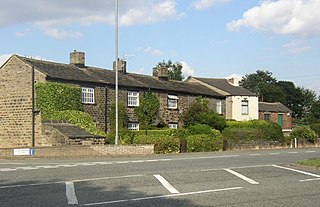 Hartshead Moor Top is a hamlet in the county of West Yorkshire, England, halfway between Brighouse and Cleckheaton on the A643. It is close to the Hartshead Moor services on the M62 motorway. In 1974 the service station was near the scene of a Provisional Irish Republican Army attack on a coach carrying soldiers and their children, killing twelve. There is a plaque in the entrance to the west-bound section commemorating those who died. 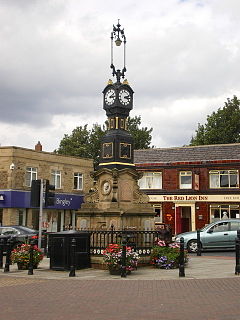 Heckmondwike is a town and electoral ward in the metropolitan borough of Kirklees, West Yorkshire, England, 9 miles (14 km) south west of Leeds. Historically part of the West Riding of Yorkshire, it is close to Cleckheaton and Liversedge. It is mostly the Batley and Spen parliamentary constituency, and had an estimated population of 17,066 in March 2001, reducing to 16,986 at the 2011 Census. 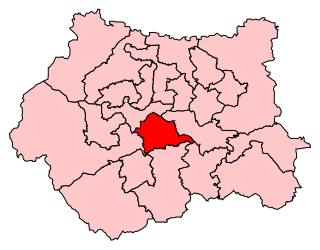 Batley and Spen is a constituency represented in the House of Commons of the UK Parliament since 2016 by Tracy Brabin, a member of the Labour and Co-operative Party.

The Heavy Woollen District is named from the heavyweight cloth manufactured in the area in West Yorkshire, England. Dewsbury, Batley, Heckmondwike and Ossett are at the core of the area while Liversedge, Gomersal, Gildersome, Birkenshaw, Mirfield, Cleckheaton, Morley, Tingley, East Ardsley, Birstall and Horbury are peripheral. The manufacture of wool cloth for clothing, blankets, rope and twine is ongoing in the district by companies such as E. Simms/Heavy Woollen Textiles.

Spenborough was, from 1915 to 1974, a local government district in the administrative county of Yorkshire, West Riding, England.

Spen Valley was a parliamentary constituency in the valley of the River Spen in the West Riding of Yorkshire. It returned one Member of Parliament to the House of Commons of the Parliament of the United Kingdom. 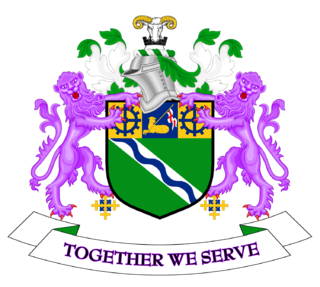 Roberttown is a village, in the township of Liversedge in Kirklees, West Yorkshire, England and is historically, part of the West Riding of Yorkshire. 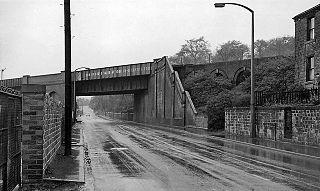 The Heaton Lodge and Wortley Railway was constructed by the London and North Western Railway, to provide a duplicate route between Huddersfield and Leeds, leaving the existing line at Heaton Lodge junction, east of Huddersfield and rejoining it at Farnley junction, south west of Leeds. During construction it became known as the Leeds New Line and following nationalisation it was referred to as the Spen Line. Passenger services ceased in the 1950s with full closure in stages between 1960 and 1990. 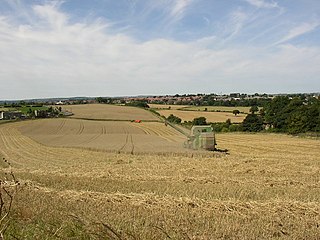 Beggarington, also known as Beggerington and Begerington is a hamlet consisting of a few houses about 0.4 miles (0.6 km) north of Hartshead in Kirklees, West Yorkshire. It is situated in a bend of the B6119 road at the junction with the road from Roberttown. Beggerington has traditionally been considered a part of Hartshead. The place name means either "where the berries grow" or is related to beggar. 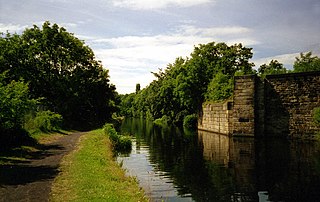 The Spen Valley Line was a railway that connected Mirfield with Low Moor through the Spen Valley in West Yorkshire, England. Opened up by the Lancashire and Yorkshire Railway in 1847, with full opening to Low Moor in 1848, the line served a busy industrial and textile area and allowed a connection for trains between Huddersfield and Bradford. The line was absorbed by the London & North Western Railway, the London Midland and Scottish Railway (LMS) and British Railways on Nationalisation. A separate link between Heckmondwike Central and Thornhill that opened later and was known as the Ravensthorpe Branch, allowed through running to Wakefield and beyond. The line was closed down to passengers in 1965 with freight continuing sporadically until 1981. A Spur onto the former Leeds New Line from the Ravensthorpe Branch kept the very southern end open until the late 1980s. The majority of the route is now the Spen Valley Greenway cycle path.