Much of the game can be played offline through single-player. The majority of the content is in the online section of the game. Only some monsters are found in single-player and the player's rewards are smaller (and less valuable) when they are offline. The goal for players online is not to defeat the most monsters but to reach the highest hunter rank, which is the storyline that is carried out online by non-player characters.

Monster Hunter places the player in the role of an up-and-coming hunter who must accomplish various quests to achieve glory. Armors, weapons, and other items are created from the remains of slain monsters by carving off their horns, scales and bones, as well as from mining for ores in the field. Monster Hunter plays in a similar fashion to Phantasy Star Online allowing the player to team up with up to three other hunters online to take down stronger monsters.

Monster Hunter is played through quests given to the hunter by the Village Elder or the Town Guild. Village Quests can be classified into four categories: hunting, gathering, capture and event. They are also categorized into different levels, ranging from 1 to 8. Higher level quests become available after quests in the previous level are completed. There are three types of quests:

The Event quests are an online-only feature. Every week, a new Event quest is available to hunters of any rank. These quests vary in style and difficulty. Some of the rarer weapons can be made only through Event quest rewards. Event quests are not vital to a hunter's success in the game, but are a useful way to gain experience and to obtain some rare items. Contract fees and time limits vary. All of the quests allow two deaths, but the third death marks the failure of the quest. Regardless which player actually dies, three deaths will still fail the quest. The only exceptions to this rule are some of the Event quests and all the Training missions, which are failed with just one death.

Hunters can be classified as either Blademasters or Gunners. The Blademaster classification consists of five sub-categories: Sword and Shield, Great Swords, Lances, Hammers, and Dual Swords (Dual Swords are unavailable on Japan version). Blademaster weapons can also be of a certain element, be it fire, water, thunder or dragon as well as status effects such as poison, stun or sleep. Gunners have two choices: Light bowgun, and Heavy Bowgun. Classifications and use of sub-category weapons are not chosen and solidified into a file; hunters are able to choose to use any weapon they want, before the start of any quest or event, as long as they have the proper money and/or supplies to do so.

Armor is always dependent on whether one chooses to use a Blademaster or Gunner weapon (excluding some few which can be worn either way). Blademaster armor usually focuses on stronger physical protection, while Gunner armor usually focuses on elemental protection. Certain armor combinations provide the user with skills such as fast eating (drinking potions faster) or being able to sharpen your weapon fast and better.

Combining ingredients to make even better items is a very important feature in Monster Hunter's gameplay, be it combining a blue mushroom and herb to make a health healing potion or a net and trap tool to make the infamous pitfall trap. Although many of the combinations must be discovered by the player, some combinations are hinted at throughout the game. Success is dependent on many factors, such as rarity of the items to be combined and amount of "combo books" a player has on hand or even certain armor skills. Some of the items in the game of the highest rarity can only be obtained by combining.

Monster Hunter was a part of an initiative from Capcom's Production Studio 1 to develop three network focused games on the PlayStation 2. The other games were Auto Modellista and Resident Evil Outbreak . [2] Capcom's plan was that at least one of the games would sell a million copies. Both Monster Hunter and Resident Evil Outbreak eventually sold a million copies each. [3]

Monster Hunter's online servers outside Japan were closed down on December 31, 2007. [4] The server that displayed the "service termination notice" was taken down April 1, 2008.[ citation needed ]

"After more than 3 years of online service, the external company providing server hosting for both Resident Evil: Outbreak and Monster Hunter has decided to exit the PlayStation 2 online business altogether, with no possibility of outsourcing either the service or the technology." [4]

Monster Hunter's online servers in Japan closed down on July 1, 2011. (PlayStation 2 versions only)

The game received "average" reviews according to video game review aggregator Metacritic. [5] In Japan, Famitsu gave it a score of all four eights, for a total of 32 out of 40. [8]

Monster Hunter Tri was originally announced for the PlayStation 3 but was switched to the Wii. [17] It features new mission modes as well as new monsters and items. This information was revealed in 2007 at Nintendo's Japanese press conference.

Final Fantasy XI, also known as Final Fantasy XI Online, is a massively multiplayer online role-playing game (MMORPG), developed and published by Square as part of the Final Fantasy series. Designed and produced by Hiromichi Tanaka, it was released in Japan on May 16, 2002, for PlayStation 2 and Microsoft Windows-based personal computers in November of that year. The game was the first MMORPG to offer cross-platform play between PlayStation 2 and personal computer. It was also the Xbox 360's first MMORPG. All versions of the game require a monthly subscription to play.

Resident Evil Outbreak is a survival horror video game with online playability for the PlayStation 2. Initially released in 2003, it was developed by Capcom Production Studio 1 and was the first entry in the Resident Evil video game series to feature cooperative gameplay and online multiplayer support, although online support was not available for the PAL versions of the game. 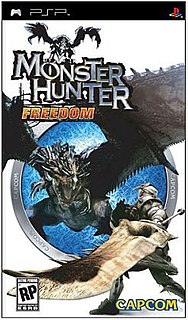 Monster Hunter Freedom is an action role-playing game for the PlayStation Portable. It is a handheld re-mastered version of the first two games in the Monster Hunter series and it is based mostly on Monster Hunter G. The game's aim is to complete quests given by various people in the goal of attaining higher and more prestigious hunting ranks. However, this game contains many changes in order to allow playing through most quests alone. It was criticized for its unusually long loading-screens and its slow pacing, both of which have been improved in the sequel. Its Japanese counterpart is called Monster Hunter Portable 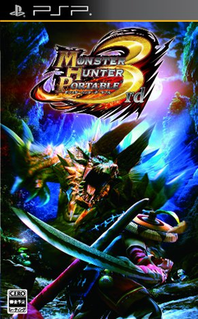 Mega Man X4, originally released in Japan as Rockman X4 (ロックマンX4), is a video game developed by Capcom. It is the fourth game in the Mega Man X series and the second game in the series to be released on the Sega Saturn and PlayStation. The two versions were released simultaneously in Japan in 1997. A North America release followed sometime thereafter, while Europe received only the PlayStation version in 1997. 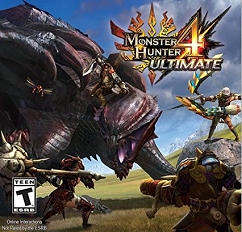 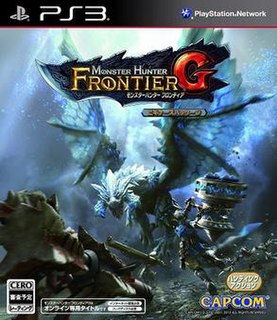 E.X. Troopers, stylized as E.X. Tr∞pers, is a third-person shooter video game developed and published by Capcom for Nintendo 3DS and PlayStation 3. The game was released exclusively in Japan to retail customers on November 22, 2012 and later on Nintendo eShop and PlayStation Network on January 24, 2013. 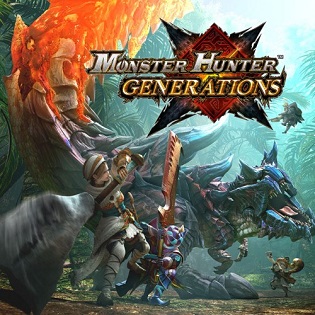 Monster Hunter Generations is an action role-playing video game developed and published by Capcom for the Nintendo 3DS. Announced in May 2015, the game was released in Japan in November 2015 and internationally in July 2016. Like other titles in the Monster Hunter series, players undertake quests that involve hunting dangerous creatures. Major additions in this installment include special attacks, new combat styles, and the ability to play as Felynes who have traditionally only appeared as a companion to the player. An expanded version of the game, titled Monster Hunter XX, was announced in October 2016, and was released exclusively in Japan in March 2017. A HD port of the expansion for the Nintendo Switch, titled Monster Hunter Generations Ultimate, was released in Japan in August 2017 followed by a worldwide release in August 2018.

Monster Hunter Stories is a role-playing video game developed by Capcom and Marvelous. It is a spin-off title set within the Monster Hunter series. The game was released in Japan for the Nintendo 3DS handheld game console on October 8, 2016, and was released in North America, Europe and Australia in September 2017. A mobile version of the game was released on December 4, 2017 in Japan and September 25, 2018 worldwide. Unlike any of the previous titles in the Monster Hunter series, Monster Hunter Stories lets players take on the role of a Rider instead of a Hunter, and are able to battle in a role-playing turn-based system. Major additions in this installment include hatching eggs and befriending monsters, battling alongside them, executing special Bond attack moves, and customizing monsters' abilities and appearance. The game features support for Amiibo figurines, with a first set launching alongside the game, and a second set launching two months later. A similarly named anime series is a loose adaptation of this game. 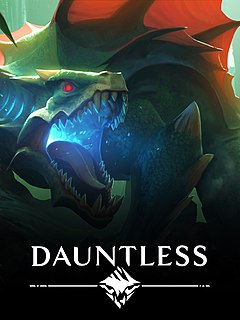 Dauntless is a free-to-play action role-playing video game developed by Phoenix Labs and distributed by Epic Games. The game initially launched in beta in May 2018 for Microsoft Windows. An early access version launched on May 21, 2019 for PlayStation 4, and Xbox One, including full support for cross-platform play, and was fully released for those platforms on September 26, 2019. A Nintendo Switch version was released on December 10, 2019. 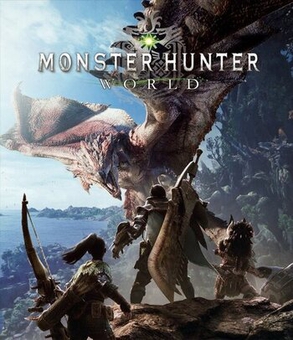 Monster Hunter: World is an action role-playing game developed and published by Capcom. A part of the Monster Hunter series, it was released worldwide for PlayStation 4 and Xbox One in January 2018, with a Microsoft Windows version following in August 2018. In the game, the player takes the role of a Hunter, tasked to hunt down and either kill or trap monsters that roam in one of several environmental spaces. If successful, the player is rewarded through loot consisting of parts from the monster and other elements that are used to craft weapons and armor, amongst other equipment. The game's core loop has the player crafting appropriate gear to be able to hunt down more difficult monsters, which in turn provide parts that lead to more powerful gear. Players may hunt alone or in a group of up to four players via the game's online multiplayer.