The music of Grenada has included the work of several major musicians, including Eddie Bullen, David Emmanuel, one of the best-selling reggae performers ever, and Mighty Sparrow, a calypsonian. The island is also known for jazz, most notably including Eddie Bullen, a pianist, songwriter and record producer currently residing in Canada. Kingsley Etienne, a keyboardist, while the Grenadan-American Joe Country & the Islanders have made a name in country music.

African dances brought to Grenada survive in an evolved form, as have European quadrilles and picquets. Some of the most popular recent styles of these dances include "Heel-and-Toe" [1] and "Carriacou Big Drum and Quadrille", with popular dancers including Willie Redhead, Thelma Phillips, Renalph Gebon and the Beewee Ballet.

Independence in 1974 launched a Grenadian national identity which was exemplified in the calypso of the time, which tended to be intensely patriotic. More modern calypso performers have experimented, using political commentary and poetry to expand the possibilities of Grenadian calypso. Indian influences have also changed the sound of Grenadian calypso.

Popular forms of music in Grenada are calypso, soca and to a lesser extent reggae and dancehall. Soca produced in Grenada has a distinct style that takes the name of "jab jab" soca.

Many years of domination by the British and the French have left behind influences in Carriacou, in songs like lullabies and reels, cantique, chanteys and quadrilles.

Carriacou is an island north of Grenada, best known for the Big Drum Afro-Caribbean song-style and Quadrille. Big Drum dates back to at least the late 18th century. Carriacou's Afro-Caribbean population is divided into nations, each of which has a distinct rhythm that identifies it; Big Drum glorifies the ancestors of these nations, which include the Manding, Chamba, Temne, Moko, Igbo, Banda, Arada, Kongo and Cromanti. The Cromanti, being the biggest nation, begins the Big Drum ceremony with a song called "Cromanti Cudjo" (or "Beg Pardon"); this is followed by the other nations' songs, all of which are based on short, declamatory phrases with choruses, accompanied by two boula drums and a single, higher-pitched cut drum , both of which are made from rum barrels. Big Drum music is used to honor the memory of the dead if the deceased's family is not able to have the traditional Tombstone Feast .

Quadrille was developed in France during the 18th century as a court dance for Napoleon, the Quadrille was brought to England, and then introduced to the colonial Caribbean during the early 19th century, providing entertainment on social occasions for planters. Slaves were forbidden to practice their culture, as the planters realized their music and dance were used to communicate, and to plan their release strategies. However, to save on the expenses of bringing musicians from England, slaves were engaged to provide music for planters’ parties. Forbidden to practice their own dances, African musicians and house workers learned the dance of the English planters, taking it into their camps and altering it. Slaves used the Quadrille to mock the planters but more importantly used this newly approved dancing time to secretly formulate uprisings to hasten their freedom. Carriacou versions of the Quadrille feature four men and four women, forming a square and are accompanied by tambourine, bass drum, violin and triangle. Dance styles can be either formal, with couples gliding rigidly in turn, or a more free style where all couples dance at the same time with unfettered movements and improvisations. This dance surpasses the Big Drum in rhythm but does not have the variety and the significance of the African Nation Dance. You can view these dances at cultural celebrations.

The funeral music of Carriacou is a major part of the island's folk music; Carriacouan religion centers on reverence for the "Old Parents", the apocryphal founders of the island's society. The saraca funerary rite, practiced on Carriacou and throughout the Grenadines, involves music, storytelling and feasting; saraca songs include both European and African lyrics. African elements, such as the call-and-response style, are often present. 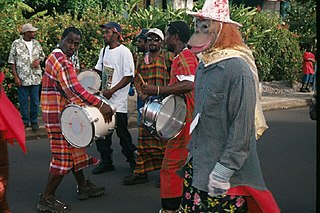 The music of Barbados includes distinctive national styles of folk and popular music, including elements of Western classical and religious music. The culture of Barbados is a syncretic mix of African and British elements, and the island's music reflects this mix through song types and styles, instrumentation, dances, and aesthetic principles..

Chutney music is a fusion of African and East Indian diasporas, started by the Calypsonian Ras Shorty I. This genre of music that developed in Trinidad and Tobago is popular in Trinidad and Tobago, Guyana, Suriname, Jamaica, other parts of the Caribbean, Fiji, Mauritius, and South Africa. It is a mixture of Bhojpuri music and Calypso music. Chutney music emerged mid-20th century and reached a peak of popularity during the 1980s. Initially lyrics were religious in nature and typically sung by females. Several sub-genres have developed.

The music of Saint Lucia is home to many vibrant oral and folk traditions and is based on elements derived from the music of Africa, especially rhythmically, and Western Europe, dances like the quadrille, polka and waltz. The banjo and cuatro are iconic Lucian folk instruments, especially a four-stringed banjo called the bwa poye. Celebratory songs called jwé show lyricism, and rhythmic complexity. The most important of the Afro-Lucian Creole folk dances is the kwadril. Music is an integral part of Lucian folk holidays and celebrations, as well as the good-natured rivalry between the La Rose and La Marguerite societies. There is little Western classical music on Saint Lucia, and the country's popular music industry is only nascent. There are few recording opportunities, though live music and radio remain a vital part of Lucian culture. Popular music from abroad, especially Trinidadian styles like calypso and soca, is widespread.

The music of Montserrat is influenced by Irish traditions, noticeable in the set dance-like Bam-chick-lay, and the presence of fife and drum ensembles similar to the bodhrán. Natives are also witness to the jumbie dance, the style of which is still strongly African. Instruments include the ukulele and shak-shak, an African instrument made from a calabash gourd; both of these are used in traditional string bands. Calypso and spiritual-influenced vocal choirs, like the Emerald Isle Community Singers, are popular.

Carriacou is an island of the Grenadine Islands. It is a dependency of Grenada, and is located in the south-eastern Caribbean Sea, northeast of the island Grenada and the north coast of South America. The name is derived from the Carib language Kayryouacou. 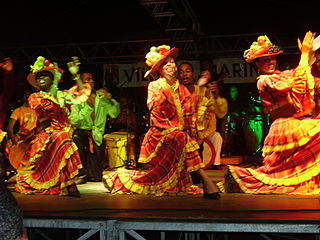 Music of the African diaspora was mostly refined and developed during the period of slavery. Slaves did not have easy access to instruments, so vocal work took on new significance. Through chants and work songs people of African descent preserved elements of their African heritage while inventing new genres of music. The culmination of this great sublimation of musical energy into vocal work can be seen in genres as disparate as Gospel Music and Hip-Hop. The music of the African diaspora makes frequent use of ostinato, a motif or phrase which is persistently repeated at the same pitch. The repeating idea may be a rhythmic pattern, part of a tune, or a complete melody. The banjo is a direct decedent of the Akonting created by the Jola people, found in Senegal, Gambia and Guinea-Bissau in West Africa. Hence, the melodic traditions of the African diaspora are probably most alive in Blues and Jazz. 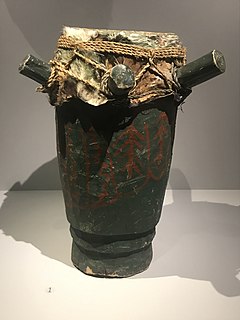 The word boula can refer to at least four different drums played in the Caribbean music area.

The Southern Caribbean is a group of islands that neighbor mainland South America in the West Indies. Saint Lucia lies to the north of the region, Barbados in the east, Trinidad and Tobago at its southernmost point, and Aruba at the most westerly section.