The Banda people are an ethnic group of the Central African Republic. They are likewise found in the Democratic Republic of the Congo, Cameroon, and South Sudan. [1] They were severely affected by slave raids of the 19th century and slave trading out of Africa. [2] [3] [4] Under French colonial rule, most converted to Christianity but retained elements of their traditional religious systems and values. [5]

Estimated to be around 1.3 million people at the turn of the 21st century, they constitute one of the largest ethnic groups in the Central African Republic, traditionally found in the northeastern part of the country. [2] [5] [6]

The Banda people were severely affected by slave raids from the north, particularly from Wadai and Darfur, in the early 19th century, and later by Khartoumers led by al-Zubayr. These captured and sold the Banda people into slavery. Many migrated south and west along the Ubangi River. [2] [3]

According to Ann Brower Stahl, a professor of Anthropology specializing in Africa studies, the medieval towns of Banda people such as Begho were probably a source of slaves between 1400 and 1600 CE, with slaves going to Islamic North Africa, the primary trade being in women and children before 1500 CE. [9] By the 16th century, slaves from the Banda regions were in use as production labor in Sudanese Islamic states, and this trade in slaves remained fairly steady in the centuries that followed. [9] Dennis Cordell, a professor of History specializing on Africa, places the slave raiding and trade practices earlier to the 11th- and 12th-century raids in southern Libya, then to Lake Chad area, which he states thereafter expanded south into the Banda people's region. [10]

The killing, enslavement and carrying away of the Banda people by slave raiders from regions that are now part of Chad, South Sudan and southeastern Central African Republic led to their depopulation, a situation further worsened when European colonialists gave weapons to the slave-raiding states. [11] In the late 19th century, they were raided by "slave hunters" from the south by armies of the Zande states now part of Congo and South Sudan, led by Arab traders who had set up Zariba (slave trading centers). [2] [3] [4] The slave raiding of the Banda people was suppressed when the French Ubangi-Shari colony was established in this region. [11]

According to American history professor Richard Bradshaw, the Banda people along with their neighbors, the Gbaya people, lived a generally peaceful life before the 19th century, after which Kevin Shillington states "African slave traders and then European colonialists introduced unprecedented violence and economic exploitation into their lives". [2] Greek social anthropology professor G. P. Makris states that the Banda people, along with the Nuba and Gumuz ethnic groups, were also a major victim of slave trading by Turco-Egyptians, and Banda is a synonym for slave or bondman in the Persian language. [12] [13] [14]

The Banda are a patrilineal ethnic group, who traditionally have lived in the Savannas north of the Congo, in dispersed home groups guided by a headman. [2] They sustain themselves by hunting, fishing, gathering wild foods and growing crops. [1] During times of crisis, to resist slave raids and to respond to wars, the Banda selected war chiefs. After the crisis was over, they relieved their warriors of their powers. [1]

The ethnic group is locally famous for craftsmanship, specifically carved wooden objects used for rituals and general utility, as well as their large animal-shaped slit drums. [1] These drums, now attributed by various names such as Banda-Yangere, [15] were used by the Banda people for musical celebrations and as tools for transmitting messages. [16]

In contemporary times, the Banda people are settled farmers in the Savannas. [17] Cotton and cassava farming was promoted among the Banda people by the French colonial officials, while Christian missionaries won many converts during the French rule. [5] Most Banda people are now Protestants (52%) or Catholic (38%). However, they have retained many of their traditional beliefs alongside those of Christianity, such as making sacrificial offerings to ancestral spirits for seasonal success for crops. [5]

The Banda people have their rites of passage, such as Semali which recognizes the crossing into adulthood. At weddings, dowries in the form of bridewealth have traditionally included iron implements for the family. [7] Polygyny was practiced historically among the Banda people, but this practice has declined in modern times. [1]

David Dacko was a Central African politician who served as the 1st President of the Central African Republic from 14 August 1960 to 1 January 1966, and 3rd President from 21 September 1979 to 1 September 1981. After his second removal from power in a coup d'état led by General André Kolingba, he pursued an active career as an opposition politician and presidential candidate with many loyal supporters; Dacko was an important political figure in the country for over 50 years. 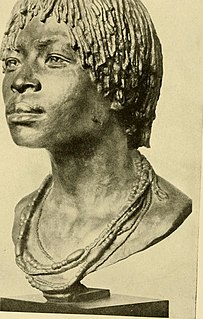 The Kongo people are a Bantu ethnic group primarily defined as the speakers of Kikongo.

Ubangi-Shari was a French colony in central Africa, a part of French Equatorial Africa.

Michel Gbezera-Bria is a Central African politician and diplomat. He was Prime Minister of the Central African Republic from 1997 to 1999. He is currently the CAR Ambassador to France.

The Chokwe people, known by many other names, are an ethnic group of Central and Southern Africa. They are found primarily in Angola, southwestern parts of the Democratic Republic of the Congo, and northwestern parts of Zambia.

Timothée Malendoma was a Central African politician who served as the 12th Prime Minister of the Central African Republic from 4 December 1992 to 26 February 1993. He was the President of the Civic Forum party.

The Burgu people are a minority ethnic group found primarily in the mountainous Ouaddaï region of eastern Chad and adjacent areas of Sudan. Their population is estimated to be about 300,000 in Chad. Other estimates place the total number of Burgu people in Sudan to be about 700,000.

The Bangi language, or Bobangi, is a relative and main lexical source of Lingala spoken in central Africa. Dialects of the language are spoken on both sides of the Ubangi River and Congo River.

Jean Jacques Marie Ferdinand de Béhagle was a French explorer of Africa. He served with the colonial service in Algeria and travelled in the Congo and Ubangi region. While attempting to find a viable land route from the Congo to the Mediterranean via Chad he was taken prisoner by Rabih az-Zubayr and hanged. 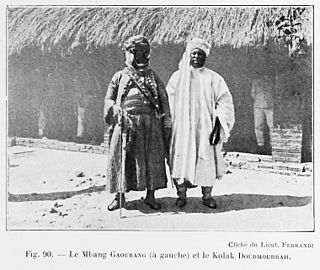 Abd ar-Rahman Gaourang II was Mbang of Bagirmi from 1885 to 1918. He came to power at a time when the sultanate was in terminal decline, subject to both Wadai and Bornu. The Sudanese warlord Rabih az-Zubayr made him his vassal in 1893. Gaourang signed a treaty that made his sultanate a French protectorate in 1897. After the final defeat of Rabih in 1900 he ruled as a subordinate of the French in Chad until his death in 1918.

Georgette Florence Koyt-Deballé is an academic administrator from the Central African Republic.

Dar al Kuti was an Islamic state in the center and northwest of the present Central African Republic which existed from around 1830 until 17 December 1912. From around 1800 the name Dar al-Kuti was given to a stretch of the frontier to the southwest of Wadai, a sultanate in the region of Lake Chad. The term “dar” signifies “abode” in Arabic, while the term “kuti” in the local language denotes a forest or densely-wooded area.

The Mbari River is a river of the Central African Republic. It is a right tributary of the Mbomou River not far to the north of where the Mbomou joins the Uele River to form the Ubangi River.

The Chinko River is a river of the Central African Republic. It is a right tributary of the Mbomou River.

Jules Alexandre Milz was a Belgian soldier who was active in exploring the northeast of the Congo Free State. He traveled extensively in Uele District, where he resolved the question of whether the Uele River was the upper portion of the Ubangi River. He was second in command of an expedition to the Nile in 1891–1892, and took over command after the leader died.

Léon-Charles-Édouard Hanolet was a Belgian soldier, explorer and colonial administrator. He is known for his explorations in 1894–1895 in what is now the Central African Republic, which led to an agreement between France and Belgium that the Ubangi-Mbomou rivers would form the boundary between their territories. He defended the Lado Enclave against the retreating Mahdist forces in 1898.

Georges-Edouard le Marinel was a Belgian soldier, engineer, explorer and colonial administrator. He is known for leading explorations of the country around the Ubangi River and Mbomou River, which later became the boundaries between French and Belgian territory. 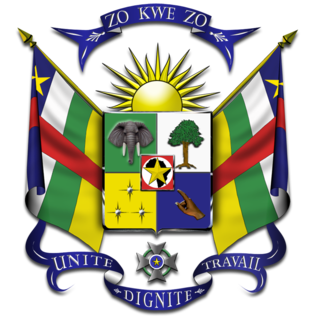