The Lunda (Balunda, Luunda, Ruund) are a Bantu ethnic group that originated in what is now the Democratic Republic of the Congo along the Kalanyi River and formed the Kingdom of Lunda in the 17th century under their ruler, Mwata Yamvo or Mwaant Yav, with their capital at Musumba. [1] From there they spread widely through Katanga and into Eastern Angola, north-western Zambia (the Kanongesha-Lunda and the Ishindi-Lunda, Gabon, Republic of Congo) [2] and the Luapula valley of Zambia (the Eastern Lunda or Kazembe-Lunda).

The Lunda were allied to the Luba, and their migrations and conquests spawned a number of tribes such as the Luvale of the upper Zambezi and the Kasanje on the upper Kwango River of Angola. [1]

The Lunda people's heartland was rich in the natural resources of rivers, lakes, forests and savannah. Its people were fishermen and farmers, and they prospered. They grew maize, millet, yams, sorghum, squash, beans, sweet potatoes, oil palms and tobacco, [1] and were palm wine drinkers. [3] Their traders came into contact with the Portuguese, and Arab and Swahili traders of East Africa. They played a large role in the slave and ivory trade that moved goods and people from central Africa to the coasts for export. [1]

The Lunda were nomadics until the 17th. [3] The people of the Lunda Kingdom believed in Nzambi or Nzamb Katang as a Supreme Creator of the world who created everything of existence on earth. Their religion did not address Nzambi directly, but through the spirits of their ancestors. [1] Until the 17th century, apparently, they used to practise cannibalism. Their kings had twenty to thirty wives. The Lunda captured adolescents from the peoples they defeated. These teenagers were turned into slaves and wore an iron necklace to symbolise their status. The slaves would only shed the collar when they had shown the king the severed head of one of the kingdom's enemies. After this, these former slaves were to be incorporated into Lunda society.

After 1608 Lunda people launched several attacks against the Mbundu. This provoked a war between the kingdoms Ndongo and Lunda. After the defeat of the Ndongo, Lunda people based their diet on the cows and pigs they had stolen from kingdom of Ndongo, while their income was based on the sale of Mbundu prisoners to Portuguese merchants. They subsequently became sedentary, migrated to other regions, developed a family system typical of most societies (they married and had children) and became a powerful empire that based part of its income on the sale of slaves, both on a small and large scale. The slave trade was abandoned in the 19th century when the European slave trade ceased. [3]

Today the Lunda people comprise hundreds of subgroups such as the Akosa, Imbangala and Ndembu, and number approximately 500,000 in Angola, 750,000 in the Congo, and 200,000 in Zambia. Most speak the Lunda language, Chilunda, except for the Kazembe-Lunda who have adopted the Bemba language of their neighbours. [1]

Lake Mweru is a freshwater lake on the longest arm of Africa's second-longest river, the Congo. Located on the border between Zambia and Democratic Republic of the Congo, it makes up 110 kilometres (68 mi) of the total length of the Congo, lying between its Luapula River (upstream) and Luvua River (downstream) segments.

The culture of Angola is influenced by the Portuguese. Portugal occupied the coastal enclave Luanda, and later also Benguela, since the 16th/17th centuries, and expanded into the territory of what is now Angola in the 19th/20th centuries, ruling it until 1975. Both countries share cultural aspects: language (Portuguese) and main religion. However, present-day Angolan culture is mostly NATIVE Bantu, which was mixed with Portuguese culture. The diverse ethnic communities with their own cultural traits, traditions and native languages or dialects include the Ovimbundu, Ambundu, Bakongo, Chokwe, Avambo and other peoples. 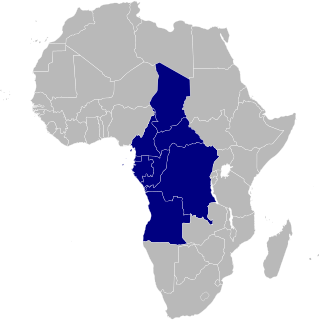 The pre-colonial history of the modern-day Democratic Republic of the Congo encompasses the history of the Congo Basin region up to the establishment of European colonial rule in the era of New Imperialism and particularly the creation of the Congo Free State and its expansion into the interior after 1885. As the modern territorial boundaries of the Democratic Republic of the Congo did not exist in this period, it is inseparable from the wider pre-colonial histories of Central Africa, the Great Lakes and Rift Valley as well as the Atlantic World and Swahili coast. 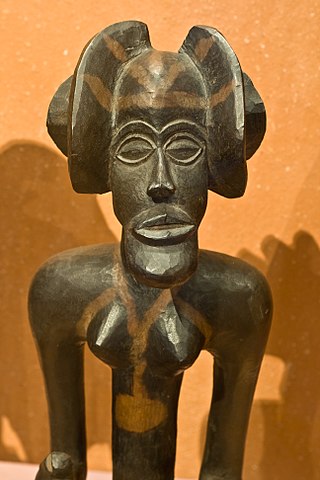 The Chokwe people, known by many other names, are an ethnic group of Central and Southern Africa. They are found primarily in Angola, southwestern parts of the Democratic Republic of the Congo, and northwestern parts of Zambia.

Kazembe is a traditional kingdom in modern-day Zambia, Southeastern Congo. For more than 250 years, Kazembe has been an influential kingdom of the Kiluba-Chibemba, speaking the language of the Eastern Luba-Lunda people of south-central Africa. Its position on trade routes in a well-watered, relatively fertile and well-populated area of forestry, fishery and agricultural resources drew expeditions by traders and explorers who called it variously Kasembe, Cazembe and Casembe. 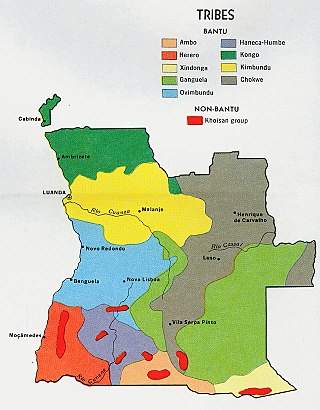 The Ambundu or Mbundu (Mbundu: Ambundu or Akwambundu, singular: Mumbundu are a Bantu people living in Angola's North-West, North of the river Kwanza. The Ambundu speak Kimbundu, and most also speak the official language of the country, Portuguese. They are the second biggest ethnic group in the country and make up 25% of the total population of Angola. 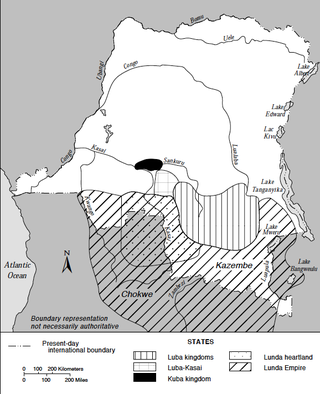 The Nation of Lunda was a confederation of states in what is now the Democratic Republic of Congo, north-eastern Angola, and north-western Zambia, its central state was in Katanga.

The colonial history of Angola is usually considered to run from the appearance of the Portuguese under Diogo Cão in 1482 (Congo) or 1484 until the independence of Angola in November 1975. Settlement did not begin until Novais's establishment of São Paulo de Loanda (Luanda) in 1575, however, and the Portuguese government only formally incorporated Angola as a colony in 1655 or on May 12, 1886.

The Jaga or Jagas were terms applied by the Portuguese to tribes such as Yaka, Suku, Teke, Luba, Kuba and Hungaan invading bands of African warriors east and south of the kingdom of Kongo. The use of the phrase took on different connotations depending on where it was applied. There were two groups of people, both known as fierce warriors, who were dubbed jagas or the jaga. Unbeknownst to the Portuguese who encountered these warriors, the two groups were practically unrelated.

Ilunga Mbidi was a soldier and cultural hero of the Luba and Lunda people.

This is a history of Katanga Province and the former independent State of Katanga, as well as the history of the region prior to colonization.

The Kingdom of Luba or Luba Empire (1585–1889) was a pre-colonial Central African state that arose in the marshy grasslands of the Upemba Depression in what is now southern Democratic Republic of Congo. 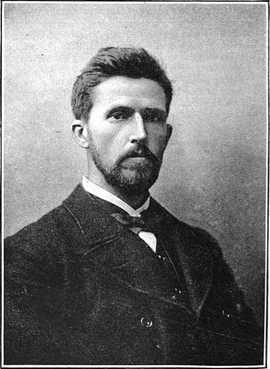 Frederick Stanley Arnot was a British missionary who did much to establish missions in what are now Angola, Zambia and the Democratic Republic of the Congo (DRC).

Kalene Hill is a community in the northwest of Zambia near a hill by the same name about 3 kilometres (2 mi) to the southeast. It is part of the Ikelenge District. Kalene Hill was the site of an early medical mission. The hospital is still important to the region.

Lamba people are a Bantu ethnolinguistic group mainly located in the Central, Copperbelt, and North-Western provinces of Zambia. Lamba people speak the Lamba language, with Lamba and Lima the major dialects recognized.

The Yeke Kingdom of the Garanganze people in Katanga, DR Congo, was short-lived, existing from about 1856 to 1891 under one king, Msiri, but it became for a while the most powerful state in south-central Africa, controlling a territory of about half a million square kilometres. The Yeke Kingdom also controlled the only trade route across the continent from east to west, since the Kalahari Desert and Lozi Kingdom in the south and the Congo rainforest in the north blocked alternative routes. It achieved this control through natural resources and force of arms—Msiri traded Katanga's copper principally, but also slaves and ivory, for gunpowder and firearms—and by alliances through marriage. The most important alliances were with Portuguese–Angolans in the Benguela area, with Tippu Tip in the north and with Nyamwezi and Swahili traders in the east, and indirectly with the Sultan of Zanzibar who controlled the east coast traders.

Lunda Lubanza traditional ceremony is celebrated by the Lunda people of senior Chief Ishindi during the month of August every year at Mukanda Nkunda in Zambezi district of the North-Western Province of Zambia.

Some of the information is based on the German Wikipedia article on the Lunda (Königreich), which gives two sources:

Wikimedia Commons has media related to Lunda people .
This page is based on this Wikipedia article
Text is available under the CC BY-SA 4.0 license; additional terms may apply.
Images, videos and audio are available under their respective licenses.