The Buckeyes competed in the WCHA championship tournament in March 2001, defeating the St. Cloud State Huskies in the first round and No. 1 Minnesota Golden Gophers in the second round to advance to the championship game. The Buckeyes were defeated by eventual national champion Minnesota-Duluth Bulldogs. The Buckeyes had an 18–16–3 overall record, including 11–10–3 in the WCHA, and finished No. 8 in the national polls. During the regular season, they were 12–5–1 in their last 18 contests and finished 7–1–0.

The 2001–02 season saw the Buckeyes defeat several nationally ranked teams, including the No. 3 University of New Hampshire Wildcats and the No. 4 St. Lawrence Saints, and tie the No. 6 Dartmouth Big Green. Five players received postseason honors, including Jeni Creary, who was named the WCHA Rookie of the Year and All-WCHA First Team selection after leading the nation in scoring for the first half of the season, and Emma Terho née  Laaksonen, who earned JOFA/AHCA Second Team All-America accolades and All-WCHA Second Team honors despite missing ten games while representing her native Finland at the 2002 Winter Olympics.

In the 2006–07 season, the Buckeyes reached the 20-win mark for the first time in program history, finishing the season with a 20–13–4 record. They set a program record for the longest unbeaten streak at ten games (9–0–1, Oct. 28 – Dec. 8), posted a team-best 30 points in the WCHA with a 13–11–4 conference record and had a 12–5–3 home record while finishing fourth in the league standings. They swept the Minnesota State Mavericks in the best-of-three league playoff tournament and advanced to the WCHA semifinals against eventual national champion Wisconsin. The Buckeyes completed the season as the 10th-ranked team in both the USCHO.com and USA Hockey national polls.

In 2008, Tessa Bonhomme was Ohio State's first two-time Top 10 finalist for the Patty Kazmaier Memorial Award, given to the top Division I women's hockey student-athlete in the nation. She was also the team captain of the 2007–08 Buckeyes. Bonhomme was also named WCHA Player of the Year and WCHA Defensive Player of the Year, the first Buckeye to receive either award.

Natalie Spooner scored 21 goals in 2009, leading the team and earning the program's No. 7 spot for single-season goals. She had a six-game point streak from Nov. 15 to Jan. 9 that included a five-game goal streak to tie for the second-longest in program history. On December 12, 2008, she set the program record for goals in a game with four in a 6–5 win at Minnesota State, including a natural hat trick in the second period in a span of 1:56. [3]

Laura McIntosh was recognized as the WCHA offensive player of the week for October 19, 2011. She had a record-breaking weekend in the Buckeyes' conference series sweep of St. Cloud State, during which she was credited with four points, seven shots on goal and a +5 plus/minus rating. On October 14, she scored her first goal of the season and assisted on a Hokey Langan goal. The assist made McIntosh Ohio State's all-time leader in career points against WCHA opponents, surpassing Jana Harrigan's 110 league points in 2006. The following day, McIntosh scored two points, assisting on Ally Tarr's shorthanded game-winning goal and scoring the Buckeyes' third goal of the game. [4]

Three players reached milestones in a January 27, 2012 defeat of the North Dakota Fighting Sioux. Spooner scored two goals, McIntosh had three assists and Langan had two assists. McIntosh's assists moved her into a tie at the top of the program's all-time career points list. Her 160 career points are now tied with Harrigan's. Spooner's goals were both on the power-play, bringing her season total to seven. With the goals, Spooner reached the 150 career point mark, good for third all-time in program history. Langan's assists helped her reach the 100-point milestone, only the eighth Buckeyes player to reach the mark. [5]

They received an at large bid for the 2018 NCAA Women's Ice Hockey Tournament. They beat the Boston College Eagles 2–0 in the quarterfinals, making it to their first ever NCAA Women's Frozen Four. They lost in the semi-finals to Clarkson.

For the 2020/21 season the Buckeyes once again advanced to the WCHA Championship game, where they fell to the Wisconsin Badgers in overtime. In the National Tournament, they beat Boston College in the quarterfinals 3-1 but once again fell to Wisconsin in the Frozen Four

During the 2021/22 season, the Buckeyes reached the program's first 1 seed after defeating Minnesota 3–2 in overtime for the WCHA Championship, in the process earning both an automatic bid to the 2022 NCAA Women'sIceHockeyTournament and a home playoff game. The Buckeyes defeated the 7 seed Quinnipiac 4–3 in double overtime, sending them the program's 3rd Frozen Four. There, they beat #6 Yale 2–1, and won the program's first National Title two days later, beating Minnesota Duluth 3–2. Defenseman Sophie Jacques finished the season with 21 goals and 38 assists for 59 points total and was a Patty Kazmaier Award finalist. Her and head coach Nadine Muzerall became the USCHO's Player of the Year and Coach of the Year, respectively.

Natalie Rose Darwitz is an American ice hockey player. Natalie was the Captain of the US Women's National Team for several seasons beginning with the 2007–08 season. She won three World Championships between 2005 and 2009, and two Olympic silver medals and one bronze medal in Women's ice hockey for the US. She is currently the assistant coach for the Minnesota Golden Gophers women's ice hockey team.

Tessa Bonhomme is a Canadian former professional ice hockey player and is a television sports reporter for The Sports Network (TSN). She was an Olympic gold medallist as a member of the Canadian national women's hockey team and played for the Toronto Furies in the Canadian Women's Hockey League. She was also co-captain of the Ohio State Buckeyes women's ice hockey team in the NCAA.

Emma Kristiina Terho née Laaksonen is a Finnish retired ice hockey defenseman and the current Chair of the IOC Athletes' Commission. She is the general manager of Kiekko-Espoo Naiset in the Naisten Liiga. At the 1998 Winter Olympics in Nagano she became the youngest Winter Olympian to medal for Finland at the age of 16 years 54 days.

The Minnesota Golden Gophers women's ice hockey team plays for the University of Minnesota at the Twin Cities campus in Minneapolis. The team is one of the members of the Western Collegiate Hockey Association (WCHA) and competes in the National Collegiate Athletic Association (NCAA) in Division I. The Golden Gophers have won six NCAA Championships as well as the final American Women's College Hockey Alliance Championship. In the WCHA, they have also been regular season champions 11 times and tournament champions 7 times. In addition to their overall success as a competitive team, the Gophers have also been ranked in the nation's top two teams for attendance since becoming a varsity sport, and the team holds the second largest single-game attendance record for women's collegiate hockey, drawing 6,854 fans for the first Minnesota women's hockey game on November 2, 1997. The team also holds the distinction of having the longest winning streak in women's or men's college hockey at 62 games from February 17, 2012 to November 17, 2013, winning back-to-back NCAA titles during the stretch. 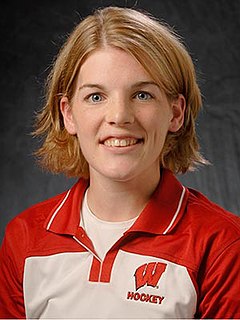 Sara Bauer played for the Wisconsin Badgers women's ice hockey program. In four years, she accumulated 218 points. Bauer won the Patty Kazmaier Memorial Award in 2006. During the 2008–09 NCAA season, the WCHA honored its Top 10 Players from the First Decade. Among the group of top 10 players, was former Wisconsin forward Sara Bauer.

Nadine Muzerall is Minnesota's all-time leader with 139 career goals, including a record 40 power-play goals. She was a member of the inaugural team of University of Minnesota women's hockey. She is currently the head coach at Ohio State University

Natalie Marie Spooner is a Canadian ice hockey player for the now defunct Toronto Furies, who played for the Canadian National women's ice hockey team from 2007 to 2008, and rejoined the program in 2010.

The Minnesota Golden Gophers women's ice hockey program represented the University of Minnesota during the 2016-17 NCAA Division I women's ice hockey season. The defending champions returned to the Frozen Four for the sixth consecutive year by upsetting Minnesota-Duluth in the opening game of the NCAA Tournament.

Daryl Watts is a Canadian women's ice hockey player. She was awarded the 21st Patty Kazmaier Award, becoming the first freshman player to win the award. Watts finished the season with 82 points, which led all competitors in NCAA women's ice hockey.

Emma Maltais is a Canadian ice hockey forward, currently playing for the Ohio State Buckeyes of the NCAA Division I.

Jacqueline M. Barto is an American former ice hockey coach. She was the first and only women's hockey coach for the Ohio State Buckeyes women's ice hockey team. At the time of her retirement in 2011, Barto had coached more than 500 games in her career and ranked eighth in career victories among NCAA Division I coaches. Barto’s final record at OSU was 248–272–52, a .433 winning percentage.

Taylor Heise is an American women's ice hockey forward for Minnesota. She won the Patty Kazmaier Award in 2022.

Wikimedia Commons has media related to Ohio State Buckeyes women's ice hockey .
This page is based on this Wikipedia article
Text is available under the CC BY-SA 4.0 license; additional terms may apply.
Images, videos and audio are available under their respective licenses.