"Poor Butterfly" is a popular song. It was inspired by Giacomo Puccini's opera Madame Butterfly and contains a brief musical quote from the Act two duet Tutti i fior in the verse.

The music was written by Raymond Hubbell, the lyrics by John L. Golden. The song was published in 1916. It was introduced in the Broadway show The Big Show, which opened in August 1916 at the New York Hippodrome, and was sung in the show by Sophie Bernard. [1]

The song has become a jazz standard, recorded by many artists.

The two biggest hit versions in 1917 were recorded by Elsie Baker (using the pseudonym Edna Brown) and by the Victor Military Band. [1]

Baker's recording was made on December 15, 1916 and released on Victor as catalog number 18211, [1] with the flip side being a recording of "Alice in Wonderland" by Howard & McDonough. [2]

Another version which received a significant amount of popularity [1] was by Grace Kerns recording under the name Catherine [4] (or Katherine [1] ) Clark. This version was recorded in November 1916 and released by Columbia Records as catalog number A-2167, with the flip side “Century Girl”. [4]

An arrangement for violin and orchestra was recorded by Fritz Kreisler on March 1, 1917, and issued on Victor as catalog number 64555.

The song was revived in the 1950s by The Hilltoppers for a top-20 chart hit. Their recording was released by Dot Records as catalog number 15156, with the flip side "Wrapped up in a Dream". It first reached the Billboard magazine Best Seller chart on April 14, 1954 and lasted 5 weeks on the chart, peaking at #15. [6] (Other sources [7] give the first date on the chart as April 24 and the highest position as #12.) The same recording was released in Canada by Quality Records as catalog number K1235, with the same flip side. [8]

"Wheel of Fortune" is a popular song written by Bennie Benjamin and George David Weiss and published in 1951. It is best remembered in the 1952 hit version by Kay Starr.

"Blue Tango" is an instrumental composition by Leroy Anderson, written for orchestra in 1951 and published in 1952. It was later turned into a popular song with lyrics by Mitchell Parish. Numerous artists have since covered "Blue Tango".

"Blues in the Night" is a popular blues song which has become a pop standard and is generally considered to be part of the Great American Songbook. The music was written by Harold Arlen, the lyrics by Johnny Mercer, for a 1941 film begun with the working title Hot Nocturne, but finally released as Blues in the Night. The song is sung in the film by William Gillespie.

"Don't Let the Stars Get in Your Eyes" is a country song about a man away from home who's worried that his paramour may unwittingly stray from their relationship. The song was recorded in many different styles by many artists. It was written by Winston L. Moore and was published in 1952.

"Love Me or Leave Me" is a popular song written in 1928 by Walter Donaldson with lyrics by Gus Kahn. The song was introduced in the Broadway musical comedy Whoopee!, which opened in December 1928. Ruth Etting's performance of the song was so popular that she was also given the song to sing in the play Simple Simon, which opened in February 1930.

"So in Love" is a popular song, written by Cole Porter, from his musical Kiss Me, Kate, which was based on Shakespeare's The Taming of the Shrew. It was sung in the show by Patricia Morison, reprised by Alfred Drake, and further popularized by Patti Page in 1949.

"With My Eyes Wide Open, I'm Dreaming" is a popular song. The music was composed by Harry Revel with lyrics by Mack Gordon, and published in 1934. The song was introduced by Jack Oakie and Dorothy Dell in the movie Shoot the Works directed in 1934 by Wesley Ruggles.

"Sometimes I'm Happy" is a popular song. The music was written by Vincent Youmans, the lyrics by Irving Caesar. The song was originally published in 1923 under the title "Come On And Pet Me," with lyrics by Oscar Hammerstein II and William Cary Duncan. It was originally intended for the Broadway musical Mary Jane McKane, but was cut before the show opened. The music was subsequently used, with new lyrics and title, in the short-lived 1925 musical A Night Out, and in the musical Hit the Deck, starring Stanley Holloway and opening in April 1927. 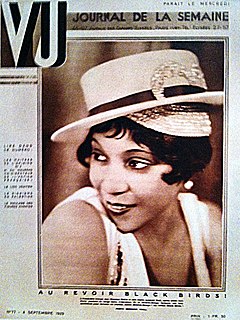 "I Can't Give You Anything but Love, Baby" is an American popular song and jazz standard by Jimmy McHugh (music) and Dorothy Fields (lyrics). The song was introduced by Adelaide Hall at Les Ambassadeurs Club in New York in January 1928 in Lew Leslie's Blackbird Revue, which opened on Broadway later that year as the highly successful Blackbirds of 1928, wherein it was performed by Adelaide Hall, Aida Ward, and Willard McLean.

"A Garden in the Rain" is a popular song. The music was composed by Carroll Gibbons, the lyrics by James Dyrenforth. The song was published in 1928.

"I Found a Million Dollar Baby " is a popular song.

"Hoop-Dee-Doo" is a popular song published in 1950 with music by Milton De Lugg and lyrics by Frank Loesser. It was released as a single by the Australian band The Wiggles from their 2001 album, Hoop-Dee-Doo! It's a Wiggly Party!.

"More Than You Know" is a popular song, composed by Vincent Youmans with lyrics by Billy Rose and Edward Eliscu. The song was published in 1929.

"That's My Desire" is a 1931 popular song with music by Helmy Kresa and lyrics by Carroll Loveday. 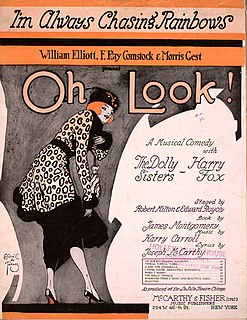 "Among My Souvenirs" is a 1927 song with words by Edgar Leslie and music by Horatio Nicholls.

"Maybe" is a pop song written by Allan Flynn and Frank Madden that was published in 1940.