Last updated July 22, 2021
Not to be confused with the city of Sheboygan or Cheboygan.
City in Jowzjan Province, Afghanistan

The city's name is a corruption of its classical Persian name, Shaporgân, meaning "[King] Shapur's town". Shapur was the name of two Sasanian kings, both of whom built a great number of cities. However, Shapur I was the governor of the eastern provinces of the empire, and it is more likely that he is the builder of a roadway between a few important cities. These include Nishapur and Bishapur in Iran, and Peshawar in Pakistan.

After Maymana, Sheberghan is the second most important Uzbek-dominated city in all of Afghanistan. Uzbek is the First language of a majority of its inhabitants. Large numbers of Tajiks, Hazaras, Pashtuns, and Arabs live in the city. In 1856, J. P. Ferrier wrote: "Sheberghān is a town containing 12,000 souls. Uzbeks being in the great majority."

The Sheberghan "Arabs" are all Persian-speaking, even though they claim an Arab identity. There are other such Persian and Pashto-speaking "Arabs" to the east, with pockets residing in Mazar-i Sharif, Kholm, Kunduz, and Jalalabad. Their self-identification as Arabs is largely based on their tribal identity, and may in fact point to the Arab migration of the 7th and 8th centuries migration to this and other Central Asian locales in the wake of the Islamic conquests of the region. [6]

Sheberghān was once a flourishing settlement along the Silk Road. In 1978, Soviet archaeologists discovered the famed Bactrian Gold in the village of Tillia Tepe outside Sheberghān. In the 13th century Marco Polo visited the city and later wrote about its honey-sweet melons. Sheberghān became the capital of an independent Uzbek khanate that was allotted to Afghanistan by the 1873 Anglo-Russian border agreement.

Sheberghān has for millennia been the focal point of power in the northeast corner of Bactria. It still sits astride the main route between Balkh and Herat, and controls the direct route north to the Amu Darya, about 90 km away, as well as the important branch route south to Sar-e Pol.

The town has a citadel, in which the governor Rustem Khan resides, but there are no other fortifications. It is surrounded by good gardens and excellent cultivation. The population of Shibberghan has a high character for bravery, and I may safely say it is one of the finest towns in Turkistan on this side of the Oxus, enjoying, besides its other advantages, an excellent climate. It is, however, subject to one very serious inconvenience: the supply of water, on which all this prosperity depends, comes from the mountains in the Khanat of Sirpool; and as there are frequent disputes between the tribes inhabiting it and those living in the town, a complete interruption of the supply is often threatened, and a war follows, to the very great injury of the place. Shibberghan maintains permanently a force of 2000 horse and 500-foot, but, in case of necessity, the town can arm 6000 men. [7]

The heavily fortified town of Yemshi-tepe, just five kilometres to the northeast of modern Sheberghān, on the road to Akcha, is only about 500 metres (550 yards) from the famous necropolis of Tillia Tepe, where an immense treasure was excavated from the graves of the local royal family by a joint Soviet-Afghan archaeological effort from 1969 to 1979. In 1977, a Soviet-Afghan archaeological team began excavations 5 km north of the town for relics. They uncovered mud-brick columns and a cross-shaped altar of an ancient temple dating back to at least 1000 B.C. Six royal tombs were excavated at Tillia Tepe revealing a vast amount of gold and other treasures. Several coins dated to the early 1st century C.E., with none dated later.

Sheberghān has been proposed as the site of ancient Xidun, one of the five xihou, or divisions, of the early Kushan Empire. [8]

Sheberghān was the stronghold of local Uzbek warlord Abdul Rashid Dostum while vying with his Tajik rival General Mohammed Atta for control of northern Afghanistan in the early years of the Karzai administration.

Sheberghān was the site of the Dasht-i-Leili massacre in December 2001 during the U.S. invasion of Afghanistan in which 250 to 3,000 (depending on sources) Taliban prisoners were shot or suffocated to death in metal truck containers, while being transferred by American and Northern Alliance soldiers from Kunduz to a Sheberghān prison.

Sheberghān is a trading and transit hub in northern Afghanistan. [9] Agriculture accounts for 50% of the 7,335 hectares within the municipal boundaries. [10] 23% of the land is residential, and largely clustered in the central area, but well distributed through the four districts. [11]

Sheberghān has a cool, semi-arid climate (Köppen climate classification BSk) [12] with hot summers and chilly, though variable, winters. There is moderate rainfall and some snowfall from January to March, but the rest of the year is dry, especially the summer.

With Soviet assistance, exploitation of Afghanistan's natural gas reserves began in 1967 at the Khowaja Gogerak field, 15 kilometers east of Sheberghān in Jowzjan Province. The field's reserves were thought to be 67 billion cubic meters. In 1967, the Soviets also completed a 100-kilometer gas pipeline linking Keleft in the Soviet Union with Sheberghān.

To demonstrate how natural gas reserves could be used as an alternative to expensive petroleum imports, the United States Department of Defense spent $43 million on a natural gas filling station. [14]

Sheberghān is important to the energy infrastructure of Afghanistan: 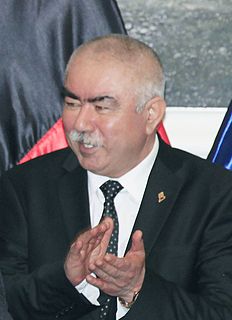 Abdul Rashid Dostum is an Afghan politician, Marshal in the Afghan National Army, and founder and leader of the political party Junbish-e Milli. Dostum was a major army commander in the communist government during the Soviet-Afghan War, and in 2001 was the key indigenous ally to US Special Forces and the CIA during the campaign to topple the Taliban government. He is regarded to be both one of the most powerful and most nororious warlords since the beginning of the Afghan wars, known for siding with winners during different wars.

Afghan Turkestan, also known as Southern Turkestan, is a region in northern Afghanistan, on the border with the former Soviet republics of Turkmenistan, Uzbekistan and Tajikistan. In the 19th century, there was a province in Afghanistan named Turkestan with Mazari Sharif as provincial capital. The province incorporated the territories of the present-day provinces of Balkh, Kunduz, Jowzjan, Sar-e Pol, and Faryab. In 1890, Qataghan-Badakhshan Province was separated from Turkestan Province. It was later abolished by Emir Abdur Rahman.

The Dasht-i-Leili massacre occurred in December 2001 during the U.S. invasion of Afghanistan when 250 to 2,000 Taliban prisoners were shot and/or suffocated to death in metal shipping containers while being transferred by Junbish-i Milli soldiers under the supervision of forces loyal to General Rashid Dostum from Kunduz to Sheberghan prison in Afghanistan. The site of the graves is believed to be in the Dasht-e Leili desert just west of Sheberghan, in the Jowzjan Province.

Kunduz is a city in northern Afghanistan, which serves as the capital of Kunduz Province. The city has a population of about 374,746, making it about the 6th-largest city of Afghanistan, and the largest city in the northeastern section of the country. Kunduz is located in the historical Tokharistan region of Bactria, near the confluence of the Kunduz River with the Khanabad River. Kunduz is linked by highways with Kabul to the south, Mazar-i-Sharif to the west, and Badakhshan to the east. Kunduz is also linked with Dushanbe in Tajikistan to the north, via the Afghan dry port of Sherkhan Bandar.

Jowzjan, sometimes spelled as Jawzjan or Jozjan, is one of the thirty-four provinces of Afghanistan, located in the north of the country bordering neighboring Turkmenistan. The province is divided into 11 districts and contains hundreds of villages. It has a population of about 613,481, which is multi-ethnic and mostly agriculturalists. Sheberghan is the capital of Jozjan province.

Ayna Television was the first commercial television station broadcasting from Mazari Sharif, Afghanistan. It began broadcasting in late 2004. The station is owned by General Abdul Rashid Dostum. It airs entertainment and news programs as well as serving as an improvement tool for Dostum and his party, Junbish-i-Milli Islami Afghanistan.

Tillya tepe, Tillia tepe or Tillā tapa is an archaeological site in the northern Afghanistan province of Jowzjan near Sheberghan, excavated in 1978 by a Soviet-Afghan team led by the Greek-Russian archaeologist Viktor Sarianidi, a year before the Soviet invasion of Afghanistan. The hoard is often known as the Bactrian gold.

Kholm or Khulm, formerly known as Tashqurghan, is a town in Balkh Province of northern Afghanistan, 60 km east of Mazar-i-Sharif one-third of the way to Kunduz. Kholm is an ancient town located on the fertile, inland delta fan of the Khulm River. As such, it is an agriculturally rich locale and densely populated. It is famous for its covered market, and is a centre for trading in sheep and wood. The town was once part of Samangan Province. 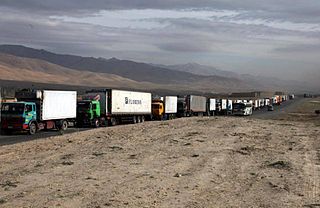 Aqcha or Akcha, is a town in northern Afghanistan. It is located approximately 50 kilometres (31 mi) east of Sheberghan and 100 kilometres (62 mi) west of Mazar-i-Sharif. It serves as the center of the Aqcha District of Afghanistan's Jowzjan Province. The town is situated a few kilometers north of the main Sheberghan-Mazar-i-Sharif road called Aqyol.

Yemshi Tepe, also Emchi-Tepe or Imshik, is an ancient circular fortress in Afghanistan, 5 kilometers to the northeast of the city of Sheberghan. According to the Soviet archaeologist Sarianidi in 1985:

Its tall, mighty walls pierced by several narrow gateways were fortified by defence towers and formed an impregnable ring .... Inside, in the northern section, stood the citadel, at whose foot were the remains of what had apparently been the palatial residence of the local ruler. Some 50 acres in area, this ancient city, indubitably a vast one for its time, comprised, along with the small villages of its sprawling suburbs, the administrative seat of the entire neighbouring region, once part of the legendary empire of Bactria.