The Sweden national rugby league team (nicknamed the Barbarians) was founded in 2008.

Rugby League in Sweden was founded by Scott Edwards in 2008. The first competitive rugby league on Swedish soil was the 2nd annual Scandinavian Nines Tournament, hosted by Spartacus Reds in Gothenburg in April 2010. [1] Following the success of the 9's competition, a domestic league was founded in 2011, comprising three teams - Borås Ravens, Spartacus Reds and Gothenburg Lions. [2]

Sweden competed in their first rugby league international on 30 October 2010 when they drew 20 - 20 against Norway. Robin Larsson was the first player to score a try for Sweden.

Sweden earnt their first international rugby league win in July 2013, beating Norway in the Nordic Cup 40–22 in Oslo. [3] Later in the year, Sweden would win their first ever silverware, after they beat Denmark in August. This victory secured Sweden's first ever Nordic cup title. 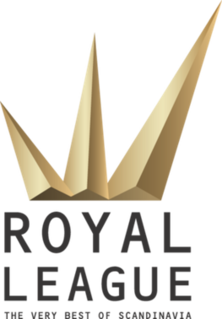 The Greece national rugby league team represents Greece in rugby league. The national team has been participating in international competition since 2003, and have become an affiliate member of the Rugby League International Federation.

The Serbia national rugby league team represents Serbia in the sport of rugby league football and has been participating in international competition since 2003. 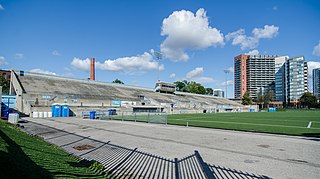 Allan A. Lamport Stadium is a multi-purpose stadium on King Street West in the Liberty Village neighbourhood of Toronto, Ontario, Canada. It is the practice facility for the Toronto Argonauts of the Canadian Football League. It is also partial home for Canada national rugby league team and Toronto Arrows rugby union team. The playing surface of the 9,600 seating capacity stadium is also dually marked for soccer and field hockey. The stadium was named for long-time Toronto politician Allan Lamport, who was associated with sporting activities in the city.

Jamie Bloem is a rugby league referee. He is a former rugby league and rugby union footballer who played in the 1990s and 2000s, and coached in the 2000s and 2010s. He played representative rugby league (RL) for South Africa (captain), and Scotland, and at club level for Cape Town Coasters, Castleford, Oldham, Doncaster, Widnes Vikings, Halifax, Huddersfield Giants, and player-coach for Stainland Stags ARLFC, as a fullback, wing, centre, scrum-half, second-row, or loose forward, and provincial level rugby union (RU) for Western Province, and at club level for Union Milnerton RFC, Racing Métro 92, Halifax RUFC and player-coach for Thornensians RUFC, Old Brodleians RUFC, Old Rishworthians RUFC, and Halifax Vandals RUFC. As of 2012, he runs a landscape gardening business in Halifax, West Yorkshire.

Australian rules football is played in Europe at an amateur level in a large number of countries. The oldest and largest leagues are those in the United Kingdom, Ireland and Denmark, each nation having a number of clubs, organised junior programs and women's football. The British AFL has now dramatically expanded into the Welsh, Scottish and English leagues. The Danish AFL has been responsible for the expansion of Australian Football into Sweden, Finland, Iceland and Norway. The governing body for Australian Football in Europe was founded in Frankfurt in January 2010; the body was initially called the European Australian Football Association, but changed its name to AFL Europe at a general assembly meeting in Milan in October of the same year. It currently has 22 member nations. AFL Europe, with backing of the AFL in Australia has overseen a large improvement in the organisation of Australian football in Europe.

The Ukraine national rugby league team was established in 2007 to represent Ukraine at rugby league football. Ukraine is in the fourth tier developing nations along with Estonia and Latvia. The national side played their first international game as a nation playing against the Great Britain Students going down 36–18. Ukraine was originally scheduled to play in the 2008 European Bowl but withdrew at the last minute due to problems with the teams visas.

The 2009 Atlantic Cup, known as the Hotels of Jacksonville Atlantic Cup for sponsorship purposes, was the first Atlantic Cup rugby league football tournament. It was held on November 14, 2009 at Hodges Stadium at the University of North Florida in Jacksonville, Florida. This inaugural contest was a single test between the United States and Jamaica. The event was deemed a success, and sponsors hoped the Atlantic Cup would become an annual event, with other developing rugby league nations such as South Africa and Japan competing. It was followed by the 2010 Atlantic Cup, which featured the United States, Jamaica, and Canada. 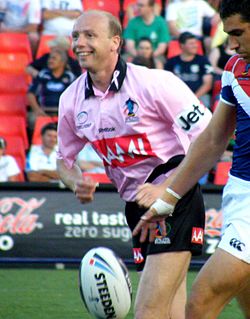 Rugby league has been played in Catalonia since 2007. The governing body of the game is the Catalan Rugby League Association.

The Spain national rugby league team represents Spain in the sport of rugby league football, running under the auspices of the Asociación Española de Rugby League.

The Denmark national rugby league team represents Denmark in the sport of rugby league. They are official observers of members of the Rugby League European Federation. Danish rugby league stats, news, team results and other information can be seen on Denmark's RLEF Page.

The Nordic Cup is a rugby league tournament played annually between Denmark national rugby league team, Norway and Sweden. It was first played in 2011, in which Denmark claimed the trophy with victory over Norway at Gladsaxe Stadium in Greater Copenhagen. For the first three years, the tournament was acknowledged by the Rugby League European Federation (RLEF), but the games were not recognised as full internationals. In 2014, the fixtures were played in accordance with RLEF regulations and recognised as full internationals.

The Sweden Rugby League is the governing body for the sport of rugby league football in Sweden. The Association was formed in 2009. The Swedish rugby league international side debuted in 2010 against their neighbours Norway.

The 2018–19 Rugby League European Championship C is the initial phase of European qualifying to the 2021 Rugby League World Cup. The series involves two pools of three teams in a round-robin tournament. These matches took place between 16 June and 15 September 2018.