There but for Fortune (song)

One of Ochs' biographers wrote that, "of all the songs that Phil would ever write, none would show his humanity as brilliantly as the four brief verses of 'There but for Fortune'". [1]

The song's title was used as the name of the 1989 compilation album There but for Fortune , which featured material taken from three albums Ochs recorded for Elektra Records between 1964 and 1966. [5] Phil Ochs: There but for Fortune was also used as the title of Michael Schumacher's 1996 biography, as well as Kenneth Bowser's 2011 documentary on the singer's life. [1] [6]

Ochs recorded "There but for Fortune" twice. In 1964 he recorded it for the Vanguard compilation New Folks Volume 2. [7] The 1964 recording was reissued on the 2000 compact disc The Early Years .

In 1966, tapes were made of Ochs's concerts at New York's Carnegie Hall and Boston's Jordan Hall. They were released as Phil Ochs in Concert . One of the songs on In Concert was "There but for Fortune". [8] Ochs introduces the song by saying it was written for him by Joan Baez, an ironic reference to her hit single.

"There but for Fortune" has been covered by more than a dozen performers besides Baez, including Chad and Jeremy, Eugene Chadbourne, Cher, The Gretchen Phillips Experience, Jim and Jean, The Mike Leander Orchestra, Vicky Leandros (from the 1966 album "Songs und Folklore") The New Christy Minstrels, Peter, Paul and Mary, The Spokesmen, Françoise Hardy. [17] and Sammy Walker. [18] Peter, Paul and Mary's cover features a bridge between the third and forth verses, containing references to hunger and children, written by Noel Paul Stookey. [19] [20] Also, a French version, "Où va la chance?", with lyrics adapted by Eddy Marnay, was originally performed by Françoise Hardy [21] and later covered by Isabelle Boulay. [22]

Philip David Ochs was an American protest singer and songwriter who was known for his sharp wit, sardonic humor, political activism, often alliterative lyrics, and distinctive voice. He wrote hundreds of songs in the 1960s and 1970s and released eight albums.

Phil Ochs in Concert is Phil Ochs' third long player, released in 1966 on Elektra Records. Despite its title, it was not entirely live, as several tracks were actually recorded in the studio, owing to flaws in the live recordings made in Boston and New York City in late 1965 and early 66. The album's producers retained the essence of a live album by including song patter and audience reactions between and during the songs. Phil Ochs in Concert features many of the folksinger's most enduring songs and represents the culmination of Ochs' folk career, the last of his original albums to be all-acoustic.

Jim R. Glover is an American peace activist and folk singer. He is from Cleveland, Ohio and lives in Brandon, Florida. 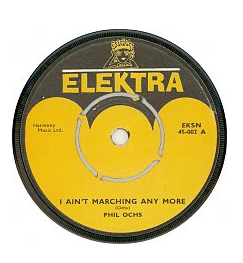 "The War Is Over" is an anti-war song by Phil Ochs, an American protest singer in the 1960s and early 1970s, who is known for being a harsh critic of the war in Vietnam and the American military-industrial establishment. The song, which was originally released on Tape from California (1968), has been described as "one of the most potent antiwar songs of the 1960s".

"Draft Dodger Rag" is a satirical anti-war song by Phil Ochs, a U.S. protest singer from the 1960s known for being a harsh critic of the American military industrial complex. Originally released on his 1965 album, I Ain't Marching Anymore, "Draft Dodger Rag" quickly became an anthem of the anti-Vietnam War movement.

Comment te dire adieu is the ninth studio album by French singer-songwriter Françoise Hardy, released in 1968 on Disques Vogue. Like many of her previous records, it was originally released without a title and came to be referred to, later on, by the name of its most popular song.

"Crucifixion" is a 1966 song by Phil Ochs, a US singer-songwriter. Ochs described the song as "the greatest song I've ever written".

"Cross My Heart" is a 1966 song by Phil Ochs, an American singer-songwriter best known for the protest songs he wrote in the 1960s.

Phil Ochs: There but for Fortune is a documentary film on the life and times of folk singer-songwriter Phil Ochs. The film, released theatrically in January 2011, was written and directed by Kenneth Bowser. Its title is taken from one of Ochs' best known songs, "There but for Fortune" (1963).

Sonia "Sonny" Ochs is a music producer and radio host. She is known for the "Phil Ochs Song Nights" she organizes, at which various musicians sing the songs of her brother, singer-songwriter Phil Ochs.

Françoise in Italian is a compilation album by the French popular singer Françoise Hardy where all songs are in Italian language. This compilation was only published in South Africa in 1970 under label World Record Co. It contains ten titles published in singles under Italian label Compagnia Generale del Disco, of 1968 to 1970.