Thottakkonam is a village in Pathanamthitta district, Kerala, India.

Pandalam Mahadeva Temple is situated in between Thottakkonam and Mulampuzha villages of Pandalam in Kerala, India. Yearly Kettukazhcha festival is one of the attractions for tourists. 10 days major festival is celebrated for Lord Siva in 'Dhanu masa' November–December every year. the festival start by hosting traditional flag names 'kodiettu' and ends by 'aarattu'. the administration of this temple held by Mahadeva Seva Samithi participated by 12 villages '12 karakal'in Pandalam. It is believed that Lord Parasuram has installed the main idol of the Garbhagriha in this temple.

Mavelikara is a taluk and municipality in the Alappuzha district of the Indian state of Kerala. Located in the southern part of the district on the banks of the Achankovil River. The name Mavelikara is believed to be turned out from the words Maveli the mythical king of Kerala, and Kara means land. This land is believed to be the place where king Mahabali knelt before Vamana, offering his head for Vamana to keep his feet. The town boasts about a rich historical and cultural background. The Chettikulangara Devi Temple, known for the Kumbha Bharani festival is located near the municipality.The place is home to one of the 108 Shiva temples of Kerala created by Lord Parashurama, the Kandiyoor Mahadeva Temple. It was also a major centre of trade and commerce in ancient Kerala and the erstwhile capital of the rulers of Onattukara. As a result of the close association with the Travancore Royal Family, Mavelikkara gained modern facilities well ahead of other places in the state. It is one of the oldest municipalities of the state. Even before India attained independence, Mavelikara had a super express transport service to Trivandrum.

Aranmula is a temple town in the state of Kerala, India. It is known as the cultural capital of Pathanamthitta district .At a distance of around 116 km from Trivandrum, the capital of Kerala, it is situated on the banks of the holy river Pampa. A centre of pilgrimage from time immemorial and a trade post of eminence, when the river was the chief means of transport, it is near Kozhenchery in Pathanamthitta District. It is easily accessible from Chengannur railway station which is located around 10 km here. 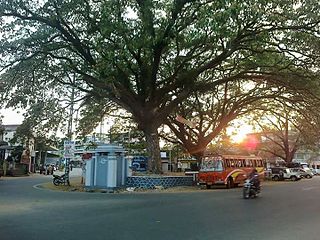 Adoor, sometimes spelled Adur is one of the major town in Kerala State pathanamthitta district. Adoor is one of the two Revenue Divisions of the Pathanamthitta District. Adoor Revenue Division includes Kozhencherry (Pathanamthitta), Konni, and Adoor Thaluks. Adoor Thaluk includes two Municipal Towns Adoor and Pandalam. Adoor was previously in the Kollam District. The municipality is located between the major cities of Trivandrum and Kochi in south Kerala.

Kulanada is a village, near Pandalam, that is located in the district of Pathanamthitta bordering with Alappuzha district in Kerala state within India.

Valiakoikkal Temple is the family temple of the Pandalam Royal Family. The temple is located at Pandalam in Pathanamthitta District, Kerala. It is situated within the Pandalam Palace premises. The main deity is Ayyappan. Procession of the Thiruvabharanam towards Sabarimala shrine starts from the Valiyakoikkal temple every year before the Makaravilakku festival. Millions of devotees visit this temple every year during the Makaravilakku festive season.

Kadakkad is a Municipal division in Pandalam. Situated in the banks of Achankovil river; Kadakkad divided into two provinces, Kadakkad North and Kadakkad South. Pandalam-Pathanamthitta road is passing through here and Kadakkad-Kaipattoor road proposed to be upgraded to NH standards.

Pandalam is a city in Pathanamthitta, Kerala