Three white soldiers is a candlestick chart pattern in the financial markets. It unfolds across three trading sessions and suggests a strong price reversal from a bear market to a bull market. The pattern consists of three long candlesticks that trend upward like a staircase; each should open above the previous day's open, ideally in the middle price range of that previous day. Each candlestick should also close progressively upward to establish a new near-term high. [1] 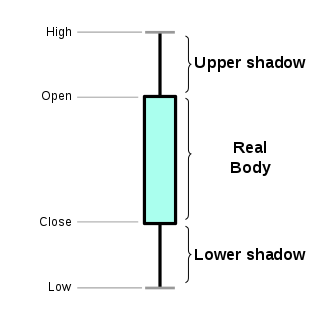 A candlestick chart is a style of financial chart used to describe price movements of a security, derivative, or currency. Each "candlestick" typically shows one day, thus a one-month chart may show the 20 trading days as 20 "candlesticks". Shorter intervals than one day are common on computer charts, longer are possible.

A financial market is a market in which people trade financial securities and derivatives such as futures and options at low transaction costs. Securities include stocks and bonds, and precious metals.

The three white soldiers help to confirm that a bear market has ended and market sentiment has turned positive. In Candlestick Charting Explained, technical analyst Gregory L. Morris says "This type of price action is very bullish and should never be ignored." [2]

Market sentiment is the general prevailing attitude of investors as to anticipated price development in a market. This attitude is the accumulation of a variety of fundamental and technical factors, including price history, economic reports, seasonal factors, and national and world events.

This candlestick pattern has an opposite known as the Three Black Crows, which shares the same attributes in reverse.

In finance, technical analysis is an analysis methodology for forecasting the direction of prices through the study of past market data, primarily price and volume. Behavioral economics and quantitative analysis use many of the same tools of technical analysis, which, being an aspect of active management, stands in contradiction to much of modern portfolio theory. The efficacy of both technical and fundamental analysis is disputed by the efficient-market hypothesis which states that stock market prices are essentially unpredictable.

The Elliott wave principle is a form of technical analysis that finance traders use to analyze financial market cycles and forecast market trends by identifying extremes in investor psychology, highs and lows in prices, and other collective factors. Ralph Nelson Elliott (1871–1948), a professional accountant, discovered the underlying social principles and developed the analytical tools in the 1930s. He proposed that market prices unfold in specific patterns, which practitioners today call "Elliott waves", or simply "waves". Elliott published his theory of market behavior in the book The Wave Principle in 1938, summarized it in a series of articles in Financial World magazine in 1939, and covered it most comprehensively in his final major work, Nature's Laws: The Secret of the Universe in 1946. Elliott stated that "because man is subject to rhythmical procedure, calculations having to do with his activities can be projected far into the future with a justification and certainty heretofore unattainable." The empirical validity of the Elliott wave principle remains the subject of debate. 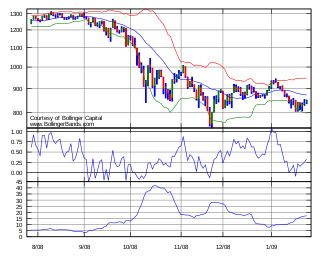 The hikkake pattern, or hikkake, is a technical analysis pattern used for determining market turning-points and continuations. It is a simple pattern that can be observed in market price data, using traditional bar charts, point and figure charts, or Japanese candlestick charts. The pattern does not belong to the collection of traditional candlestick chart patterns.

Trend following or trend trading is a trading strategy according to which one should buy an asset when its price trend goes up, and sell when its trend goes down, expecting price movements to continue.

Munehisa Homma (1724-1803) was a rice merchant from Sakata, Japan who traded in the Dojima Rice market in Osaka during the Tokugawa Shogunate. He is sometimes considered to be the father of the candlestick chart. 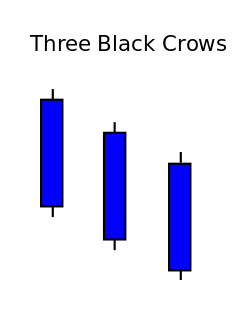 Three black crows is a term used by stock market analysts to describe a market downturn. It appears on a candlestick chart in the financial markets. It unfolds across three trading sessions, and consists of three long candlesticks that trend downward like a staircase. Each candle should open below the previous day's open, ideally in the middle price range of that previous day. Each candlestick should also close progressively downward to establish a new near-term low. The pattern indicates a strong price reversal from a bull market to a bear market. 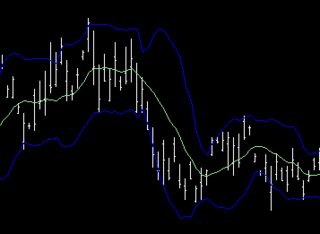 An open-high-low-close chart is a type of chart typically used to illustrate movements in the price of a financial instrument over time. Each vertical line on the chart shows the price range over one unit of time, e.g., one day or one hour. Tick marks project from each side of the line indicating the opening price on the left, and the closing price for that time period on the right. The bars may be shown in different hues depending on whether prices rose or fell in that period.

The doji is a commonly found pattern in a candlestick chart of financially traded assets in technical analysis. It is characterized by being small in length—meaning a small trading range—with an opening and closing price that are virtually equal. 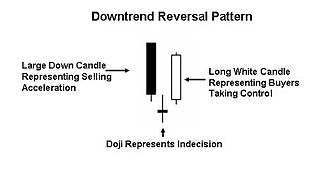 The Morning Star is a pattern seen in a candlestick chart, a type of chart used by stock analysts to describe and predict price movements of a security, derivative, or currency over time.

In the domain of technical analysis of market prices, a cup and handle or cup with handle formation is a chart pattern consisting of a drop in the price and a rise back up to the original value, followed a smaller drop and a rise past the previous peak. It is interpreted as an indication of bullish sentiment in the market and possible further price increases.

A gap is defined as an unfilled space or interval. On a technical analysis chart, a gap represents an area where no trading takes place. On the Japanese candlestick chart, a window is interpreted as a gap.

In technical analysis, a candlestick pattern is a movement in prices shown graphically on a candlestick chart that some believe can predict a particular market movement. The recognition of the pattern is subjective and programs that are used for charting have to rely on predefined rules to match the pattern. There are 42 recognised patterns that can be split into simple and complex patterns.

The price action is a method of billable negotiation in the analysis of the basic movements of the price, to generate signals of entry and exit in trades and that stands out for its reliability and for not requiring the use of indicators. It is a form of technical analysis, since it ignores the fundamental factors of a security and looks primarily at the security's price history. What differentiates it from most forms of technical analysis is that its main focus is the relation of a security's current price to its past prices as opposed to values derived from that price history. This past history includes swing highs and swing lows, trend lines, and support and resistance levels.

A renko chart is a type of financial chart of Japanese origin used in technical analysis that measures and plots price changes. A renko chart consists of bricks, which proponents say more clearly show market trends and increase the signal-to-noise ratio compared to typical candlestick charts.