Tianyuraptor is a genus of short-armed dromaeosaurid dinosaur ('running lizard'; a type of small dinosaur considered to be closely related to birds) that lived during the Early Cretaceous, about 122 million years ago. Its remains have been found in western Liaoning, China. It was similar to other dromaeosaurids found in Liaoning, with the exception of being somewhat more primitive. The type specimen, formally named in 2009, shows features not seen in previously known Northern Hemisphere (Laurasian) dromaeosaurids, but present in Southern Hemisphere (Gondwanan) species and early birds. Because of this, the scientists who first studied Tianyuraptor described it as a "transitional species", bridging the gap between northern and southern types of dromaeosaurid. Tianyuraptor also differs from previously known dromaeosaurids in that it possesses a relatively small furcula ("wishbone"), and unusually short forelimbs. [1]

The generic name of Tianyuraptor combines Tianyu, referring to the Shandong Tianyu Museum of Nature where the holotype specimen is stored, with raptor, the Latin word for 'robber', referring to the action of grabbing prey, often used in naming dromaeosaurids. The specific epithet, ostromi, is in honor of John Ostrom, [1] who contributed greatly to the study of dromaeosaurid fossils, including Deinonychus and feathered dinosaurs. [2] [3]

Tianyuraptor is a medium-sized dromaeosaurid that has several derived features that separate it from other dromaeosaurids. These include the length of the middle caudal (tail) vertebrae being more than twice that of the dorsal (back) vertebrae, a small and extremely slender furcula, and an unusually long hindlimb that is roughly three times as long as the entire series of dorsal vertebrae. As in other dromaeosaurid fossils discovered in Liaoning, [4] the tail is relatively long at 960 millimetres (38 in), nearly 4.8 times as long as the femur. [1]

The type specimen is STM1–3, a nearly complete and fully articulated skeleton that is only missing the extreme distal end of the tail. A total of 25 fully articulated caudal vertebrae are preserved and at the end three at most are estimated to be missing. The fossil was discovered in the Dawangzhangzi Bed of the Yixian Formation (Jehol Group), located in Lingyuan in western Liaoning, China. [1] The Yixian Formation is an Early Cretaceous rock unit, dated to between approximately 129.7 and 122.1 million years old, in the Barremian and Aptian faunal stages. [5] The Dawangzhangzi Bed specifically has been dated to about 122 million years ago. [6] STM1–3 is believed to be a sub-adult, with features including the incomplete fusion of skeletal parts during ontogeny. The holotype of Tianyuraptor preserves no soft tissues, unlike many other theropod specimens from the Jehol Group. [1]

While Tianyuraptor is larger in size than all other known microraptorines, it also has relatively elongated lower hindlimbs, like other microraptorines. In this regard, it is different from most other dromaeosaurids, which have relatively short lower legs. [7] For example, Tianyuraptor has a tibiotarsus/femur length ratio of greater than 1.30, while Velociraptor mongoliensis , a creature of similar size, exhibits a ratio of less than 1.10. [8] Aside from elongate hind limbs, Tianyuraptor is different from other members of Microraptorinae in regards to the relative lengths of the forelimb elements. The forelimbs of Tianyuraptor are proportionally much shorter than those of larger dromaeosaurids. For example, a similar-sized Velociraptor specimen shows an arm/leg length ratio of approximately 0.75., while Tianyuraptor has an arm/leg ratio of 0.53. [1]

The stark difference in arm length compared to other dromaeosaurids implies that the function of the arms in Tianyuraptor was different from that of other dromaeosaurs. Members of the subfamily Microraptorinae, such as Microraptor , have been suggested to have been aerodynamic and may have glided. [9] [10] Microraptorines are usually noted for their long and robust forelimbs and large, asymmetrical flight feathers. However, the shortened forelimbs, small furcula, and the transversely wide coracoid in Tianyuraptor suggest that it was not suited for aerodynamic gliding or flight.

A phylogenetic analysis performed by Zheng et al. showed Tianyuraptor to be a basal member of a group containing Laurasian dromaeosaurids. Tianyuraptor seems to possess several features that are unknown in other Laurasian dromaeosaurids, but which are seen in basal avialans and Gondwanan dromaeosaurids, including Austroraptor , Buitreraptor , Neuquenraptor , Rahonavis , and Unenlagia . Zheng and colleagues also noted that Tianyuraptor shares some features with the monophyletic subfamily Microraptorinae, though they went on to say that this mixture of features suggests a basal placement for Tianyuraptor within Microraptorinae, as evidenced by their phylogenetic analysis which indicated maximum parsimony in six of the 30 results recovered by the analysis. The authors then go on to suggest that since Tianyuraptor is considered a short-armed microraptorine, more derived long-armed microraptorines might have independently evolved flight capability. However, it is also equally possible, as argued by Zheng et al., that Tianyuraptor may in fact be a basal member of a clade containing all other Laurasian dromaeosaurids with the exception of Microraptorinae. This is indicated by the other 24 out of 30 most parsimonious trees recovered from the analysis. The discovery of Tianyuraptor sheds new light on the early evolution of dromaeosaurs and further exemplifies the great diversity this group enjoyed at an early stage. [1]

Velociraptor is a genus of dromaeosaurid theropod dinosaur that lived approximately 75 to 71 million years ago during the latter part of the Cretaceous Period. Two species are currently recognized, although others have been assigned in the past. The type species is V. mongoliensis; fossils of this species have been discovered in Mongolia. A second species, V. osmolskae, was named in 2008 for skull material from Inner Mongolia, China.

Deinonychus is a genus of dromaeosaurid theropod dinosaur with one described species, Deinonychus antirrhopus. This species, which could grow up to 3.4 meters (11 ft) long, lived during the early Cretaceous Period, about 115–108 million years ago. Fossils have been recovered from the U.S. states of Montana, Utah, Wyoming, and Oklahoma, in rocks of the Cloverly Formation, Cedar Mountain Formation and Antlers Formation, though teeth that may belong to Deinonychus have been found much farther east in Maryland.

Utahraptor is a genus of large dromaeosaurid dinosaur that lived in North America during the Early Cretaceous period. It was a heavy-built, ground-dwelling, bipedal carnivore. It contains a single species, Utahraptor ostrommaysi, which is the largest-known member of the family Dromaeosauridae.

Microraptor is a genus of small, four-winged paravian dinosaurs. Numerous well-preserved fossil specimens have been recovered from Liaoning, China. They date from the early Cretaceous Jiufotang Formation, 120 million years ago. Three species have been named, though further study has suggested that all of them represent variation in a single species, which is properly called M. zhaoianus. Cryptovolans, initially described as another four-winged dinosaur, is usually considered to be a synonym of Microraptor. 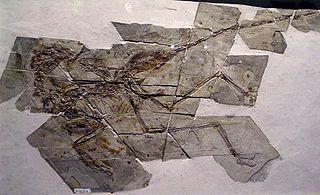 Sinornithosaurus is a genus of feathered dromaeosaurid dinosaur from the early Cretaceous Period of the Yixian Formation in what is now China. It was the fifth non–avian feathered dinosaur genus discovered by 1999. The original specimen was collected from the Sihetun locality of western Liaoning. It was found in the Jianshangou beds of the Yixian Formation, dated to 124.5 million years ago. Additional specimens have been found in the younger Dawangzhangzi bed, dating to around 122 million years ago.

Buitreraptor is a genus of dromaeosaurid dinosaurs that lived during the Late Cretaceous of Argentina at the Candeleros Formation. Buitreraptor was described in 2005 and the type species is Buitreraptor gonzalezorum. It was rooster-sized and had a very elongated head with many small teeth.

Adasaurus is a genus of dromaeosaurid dinosaur that lived in Asia during the Late Cretaceous period about 70 million years ago. The genus is known from two partial specimens found in the Nemegt Formation of Mongolia that were partially described in 1983 by the paleontologist Rinchen Barsbold.

Achillobator is a genus of large dromaeosaurid dinosaur that lived in Asia during the Late Cretaceous period about 96 million to 89 million years ago in what is now the Bayan Shireh Formation. The genus is currently monotypic, only including the type species A. giganticus. The first remains were found in 1989 during a Mongolian-Russian field expedition in Mongolia and later described in 1999. Remains at the type locality of Achillobator may represent additional specimens. It represents the first and largest dromaeosaurid known from the Bayan Shireh Formation.

Microraptoria is a clade of basal dromaeosaurid theropod dinosaurs. The first microraptorians appeared 125 million years ago in China. Many are known for long feathers on their legs and may have been semi-arboreal powered fliers, some of which even capable of launching from the ground. Most microraptorians were relatively small; adult specimens of Microraptor range between 77–90 centimetres long (2.53–2.95 ft) and weigh up to 1 kilogram (2.2 lb), making them some of the smallest known non-avialan dinosaurs. 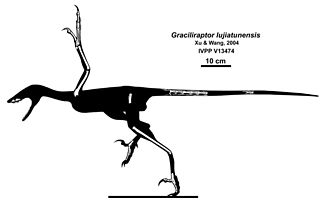 Graciliraptor is a genus of theropod dinosaur from the early Cretaceous Period. It is a microraptorine dromaeosaurid.

Shanag is a genus of dromaeosaurid theropod dinosaur from the Early Cretaceous Period of Mongolia.

Austroraptor is a genus of dromaeosaurid theropod dinosaur that lived during the Late Cretaceous Period in what is now Argentina. Austroraptor was a medium-sized, moderately-built, ground-dwelling, bipedal carnivore. It is one of the largest dromaeosaurids known, with only Achillobator, Dakotaraptor, and Utahraptor approaching or surpassing it in length.

Hesperonychus was a small, carnivorous dinosaur. It was a member of the family Dromaeosauridae, along with its larger relatives Deinonychus and Velociraptor. There is one described species, Hesperonychus elizabethae. The type species was named in honor of Dr. Elizabeth Nicholls of the Royal Tyrell Museum of Paleontology who collected it as a student in 1982. It is known from fossils recovered from the lowermost strata of the Dinosaur Park Formation of Alberta, dating to the late Cretaceous about 76.5 million years ago. Though known from partial remains, Longrich and Currie estimated its total length at under one meter and weight at about 2 kilograms, making it the smallest carnivorous dinosaur known from North America.

Changyuraptor is a genus of "four-winged", predatory dinosaurs. It is known from a single fossil specimen representing the species Changyuraptor yangi, which was discovered from Early Cretaceous deposits in Liaoning Province, China. C. yangi belongs to the group of dromaeosaurid theropod dinosaurs called the Microraptoria.

This timeline of dromaeosaurid research is a chronological listing of events in the history of paleontology focused on the dromaeosaurids, a group of sickle-clawed, bird-like theropod dinosaurs including animals like Velociraptor. Since the Native Americans of Montana used the sediments of the Cloverly Formation to produce pigments, they may have encountered remains of the dromaeosaurid Deinonychus hundreds of years before these fossils came to the attention of formally trained scientists.

Zhenyuanlong is a genus of dromaeosaurid dinosaur from the Yixian Formation of Liaoning, China. It lived during the Aptian age of the early Cretaceous period, approximately 125 million years ago. It is known from a single specimen belonging to the species Zhenyuanlong suni. This type specimen preserved a nearly complete skeleton that contains traces of feathers, including long tail feathers and large wings. In addition to further complicating diversity of Liaoning dromaeosaurids, this specimen provides the first evidence of well-developed pennaceous feathers in a large, non-flying dromaeosaur, raising the question of what function such wings would serve.

Dakotaraptor is a potentially chimaeric genus of large dromaeosaurid theropod dinosaur that lived in North America during the Late Cretaceous period. The remains have been found in the Maastrichtian stage of the Hell Creek Formation, dated to the very end of the Mesozoic era, making Dakotaraptor one of the last surviving dromaeosaurids. The remains of D. steini were discovered in a multi-species bonebed. Elements of the holotype and referred specimens were later found to belong to trionychid turtles, and further analysis of potential non-dromaeosaurid affinities of the holotype and referred material have not yet been conducted. Phylogenetic analyses of D. steini place it in a variety of positions in the Dromaeosauridae.

Zhongjianosaurus is a genus of dromaeosaurid belonging to the Microraptoria. Believed to hail from the Yixian Formation, specifically the middle of the Jehol Biota, it is the smallest known microraptorine thus far discovered and one of the smallest non-avian theropod dinosaurs.

Shri is a genus of dromaeosaurid theropod dinosaur discovered in the Barun Goyot Formation in Khulsan, Mongolia. The fossil remains of Shri date back to the Late Cretaceous period. The type and only species, Shri devi, was described in 2021 by paleontologist Alan H. Turner and colleagues.