Last updated April 12, 2021
Origination and development of an organism, usually from the time of egg fertisliation through to adult form
This article concerns ontogeny in biology. Not to be confused with the philosophical concept ontology, or the medical terms oncology or odontology.

Ontogeny (also ontogenesis) is the origination and development of an organism (both physical and psychological, e.g., moral development [1] ), usually from the time of fertilization of the egg to adult. The term can also be used to refer to the study of the entirety of an organism's lifespan.

Ontogeny, embryology and developmental biology are closely related studies and those terms are sometimes used interchangeably. Aspects of ontogeny are morphogenesis, the development of form; tissue growth; and cellular differentiation. The term ontogeny has also been used in cell biology to describe the development of various cell types within an organism. [3]

Ontogeny is used in anthropology as "the process through which each of us embodies the history of our own making." [4]

The word ontogeny comes from the Greek ὄν , on (gen. ὄντος, ontos), i.e. "being; that which is", which is the present participle of the verb εἰμί, eimi, i.e. "to be, I am", and from the suffix -geny from the Greek -γένεια -geneia, which expresses the concept of "mode of production". [5]

A seminal 1963 paper by Niko Tinbergen named ontogeny as one of the four primary questions of biology, along with Huxley's three others: causation, survival value and evolution. [6] Tinbergen emphasized that the change of behavioral machinery during development was distinct from the change in behavior during development. "We can conclude that the thrush itself, i.e. its behavioral machinery, has changed only if the behavior change occurred while the environment was held constant...When we turn from description to causal analysis, and ask in what way the observed change in behavior machinery has been brought about, the natural first step is to try and distinguish between environmental influences and those within the animal...In ontogeny the conclusion that a certain change is internally controlled (is "innate") is reached by elimination. " (p. 424) Tinbergen was concerned that the elimination of environmental factors is difficult to establish, and the use of the word "innate" is often misleading.

Most organisms undergo allometric changes in shape as they grow and mature, while others engage in metamorphosis. Even "reptiles" (non-avian sauropsids, e.g., crocodilians, turtles, snakes, [7] lizards [8] ), in which the offspring are often viewed as miniature adults, show a variety of ontogenetic changes in morphology and physiology. [9]

Comparing ourselves to others is something humans do all the time. "In doing so we are acknowledging not so much our sameness to others or our difference, but rather the commonality that resides in our difference. In other words, because each one of us is at once remarkably similar to, and remarkably different from, all other humans, it makes little sense to think of comparison in terms of a list of absolute similarities and a list of absolute differences. Rather, in respect of all other humans, we find similarities in the ways we are different from one another and differences in the ways we are the same. That we are able to do this is a function of the genuinely historical process that is human ontogeny". [4] 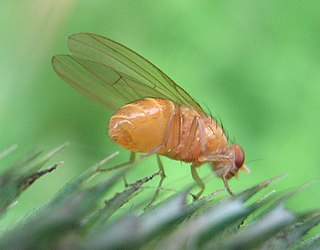 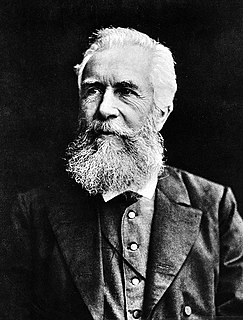 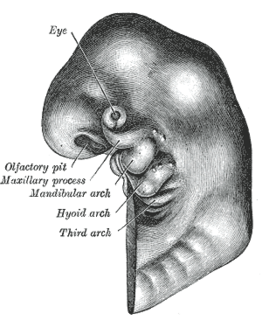 Embryo drawing is the illustration of embryos in their developmental sequence. In plants and animals, an embryo develops from a zygote, the single cell that results when an egg and sperm fuse during fertilization. In animals, the zygote divides repeatedly to form a ball of cells, which then forms a set of tissue layers that migrate and fold to form an early embryo. Images of embryos provide a means of comparing embryos of different ages, and species. To this day, embryo drawings are made in undergraduate developmental biology lessons.

The theory of recapitulation, also called the biogenetic law or embryological parallelism—often expressed using Ernst Haeckel's phrase "ontogeny recapitulates phylogeny"—is a historical hypothesis that the development of the embryo of an animal, from fertilization to gestation or hatching (ontogeny), goes through stages resembling or representing successive adult stages in the evolution of the animal's remote ancestors (phylogeny). It was formulated in the 1820s by Étienne Serres based on the work of Johann Friedrich Meckel, after whom it is also known as Meckel–Serres law. 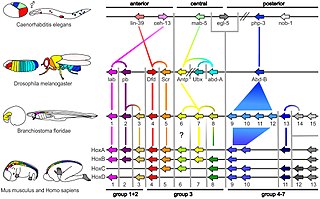 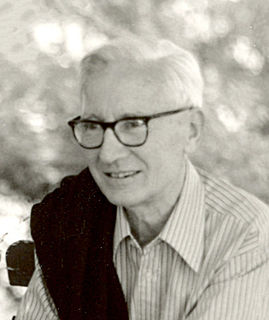 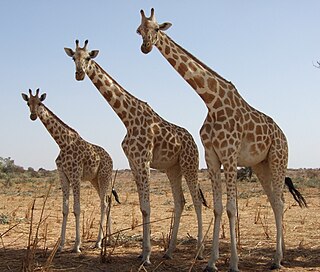 In evolutionary developmental biology, heterochrony is any genetically controlled difference in the timing or duration of a developmental process in an organism compared to its ancestors or other organisms. This leads to changes in the size, shape, characteristics and even presence of certain organs and features. It is contrasted with heterotopy, a change in spatial positioning of some process in the embryo, which can also create morphological innovation. Heterochrony can be divided into intraspecific heterochrony, variation within a species, and interspecific heterochrony, phylogenetic variation, i.e. variation of a descendant species with respect to an ancestral species.

Evolutionary neuroscience is the scientific study of the evolution of nervous systems. Evolutionary neuroscientists investigate the evolution and natural history of nervous system structure, functions and emergent properties. The field draws on concepts and findings from both neuroscience and evolutionary biology. Historically, most empirical work has been in the area of comparative neuroanatomy, and modern studies often make use of phylogenetic comparative methods. Selective breeding and experimental evolution approaches are also being used more frequently.

Evolutionary developmental psychology (EDP) is a research paradigm that applies the basic principles of evolution by natural selection, to understand the development of human behavior and cognition. It involves the study of both the genetic and environmental mechanisms that underlie the development of social and cognitive competencies, as well as the epigenetic processes that adapt these competencies to local conditions. 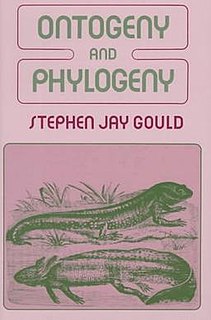 Ontogeny and Phylogeny is a 1977 book on evolution by Stephen Jay Gould, in which the author explores the relationship between embryonic development (ontogeny) and biological evolution (phylogeny). Unlike his many popular books of essays, it was a technical book, and over the following decades it was influential in stimulating research into heterochrony, changes in the timing of embryonic development, which had been neglected since Ernst Haeckel's theory that ontogeny recapitulates phylogeny had been largely discredited.

Biology is the natural science that studies life and living organisms, including their physical structure, chemical processes, molecular interactions, physiological mechanisms, development and evolution. Despite the complexity of the science, certain unifying concepts consolidate it into a single, coherent field. Biology recognizes the cell as the basic unit of life, genes as the basic unit of heredity, and evolution as the engine that propels the creation and extinction of species. Living organisms are open systems that survive by transforming energy and decreasing their local entropy to maintain a stable and vital condition defined as homeostasis.

Tinbergen's four questions, named after Nikolaas Tinbergen, are complementary categories of explanations for animal behaviour. These are also commonly referred to as levels of analysis. It suggests that an integrative understanding of behaviour must include: ultimate (evolutionary) explanations, in particular the behaviour (1) adaptive function and (2) phylogenetic history; and the proximate explanations, in particular the (3) underlying physiological mechanisms and (4) ontogenetic/developmental history.

In evolutionary biology, function is the reason some object or process occurred in a system that evolved through natural selection. That reason is typically that it achieves some result, such as that chlorophyll helps to capture the energy of sunlight in photosynthesis. Hence, the organism that contains it is more likely to survive and reproduce, in other words the function increases the organism's fitness. A characteristic that assists in evolution is called an adaptation; other characteristics may be non-functional spandrels, though these in turn may later be co-opted by evolution to serve new functions. 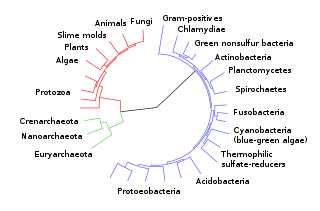 Behavioral plasticity refers to a change in an organism's behavior that results from exposure to stimuli, such as changing environmental conditions. Behavior can change more rapidly in response to changes in internal or external stimuli than is the case for most morphological traits and many physiological traits. As a result, when organisms are confronted by new conditions, behavioral changes often occur in advance of physiological or morphological changes. For instance, larval amphibians changed their antipredator behavior within an hour after a change in cues from predators, but morphological changes in body and tail shape in response to the same cues required a week to complete. 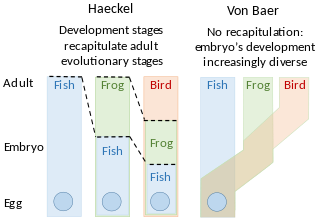