In chronostratigraphy, a stage is a succession of rock strata laid down in a single age on the geologic timescale, which usually represents millions of years of deposition. A given stage of rock and the corresponding age of time will by convention have the same name, and the same boundaries.

The term faunal stage is sometimes used, referring to the fact that the same fauna (animals) are found throughout the layer (by definition).

Stages are primarily defined by a consistent set of fossils (biostratigraphy) or a consistent magnetic polarity (see paleomagnetism) in the rock. Usually one or more index fossils that are common, found worldwide, easily recognized, and limited to a single, or at most a few, stages are used to define the stage's bottom.

Stages were important in the 19th and early 20th centuries as they were the major tool available for dating and correlating rock units prior to the development of seismology and radioactive dating in the second half of the 20th Century. Microscopic analysis of the rock (petrology) is also sometimes useful in confirming that a given segment of rock is from a particular age.

Originally, faunal stages were only defined regionally; however, as additional stratigraphic and geochonologic tools were developed, stages were defined over broader and broader areas. More recently, the adjective "faunal" has been dropped as regional and global correlations of rock sequences have become relatively certain and there is less need for faunal labels to define the age of formations. A tendency developed to use European and, to a lesser extent, Asian stage names for the same time period worldwide, even though the faunas in other regions often had little in common with the stage as originally defined.

Boundaries and names are established by the International Commission on Stratigraphy (ICS) of the International Union of Geological Sciences. As of 2008, the ICS is nearly finished a task begun in 1974, subdividing the Phanerozoic eonothem into internationally accepted stages using two types of benchmark. For younger stages, a Global Boundary Stratotype Section and Point (GSSP), a physical outcrop clearly demonstrates the boundary. For older stages, a Global Standard Stratigraphic Age (GSSA) is an absolute date. The benchmarks will give a much greater certainty that results can be compared with confidence in the date determinations, and such results will have farther scope than any evaluation based solely on local knowledge and conditions.

In many regions local subdivisions and classification criteria are still used along with the newer internationally coordinated uniform system, but once the research establishes a more complete international system, it is expected that local systems will be abandoned. 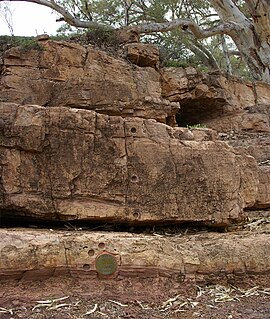 A Global Boundary Stratotype Section and Point (GSSP) is an internationally agreed upon reference point on a stratigraphic section which defines the lower boundary of a stage on the geologic time scale. The effort to define GSSPs is conducted by the International Commission on Stratigraphy, a part of the International Union of Geological Sciences. Most, but not all, GSSPs are based on paleontological changes. Hence GSSPs are usually described in terms of transitions between different faunal stages, though far more faunal stages have been described than GSSPs. The GSSP definition effort commenced in 1977. As of 2020, 74 of the 104 stages that need a GSSP have a ratified GSSP.

Biostratigraphy is the branch of stratigraphy which focuses on correlating and assigning relative ages of rock strata by using the fossil assemblages contained within them. The primary objective of biostratigraphy is correlation, demonstrating that a particular horizon in one geological section represents the same period of time as another horizon at a different section. Fossils within these strata are useful because sediments of the same age can look completely different, due to local variations in the sedimentary environment. For example, one section might have been made up of clays and marls, while another has more chalky limestones. However, if the fossil species recorded are similar, the two sediments are likely to have been laid down around the same time. Ideally these fossil are used to help identify biozones, as they make up the basic biostratigraphy units, and define geological time periods based upon the fossil species found within each section.

In the stratigraphy sub-discipline of geology, a Global Standard Stratigraphic Age, abbreviated GSSA, is a chronological reference point and criterion in the geologic record used to define the boundaries between different geological periods, epochs or ages on the overall geologic time scale in a chronostratigraphically useful rock layer. A worldwide multidisciplinary effort has been ongoing since 1974 to define such important metrics. The points and strata need be widespread and contain an identifiable sequence of layers or other unambiguous marker attributes.

The Albian is both an age of the geologic timescale and a stage in the stratigraphic column. It is the youngest or uppermost subdivision of the Early/Lower Cretaceous epoch/series. Its approximate time range is 113.0 ± 1.0 Ma to 100.5 ± 0.9 Ma. The Albian is preceded by the Aptian and followed by the Cenomanian.

In the geologic timescale, the Artinskian is an age or stage of the Permian. It is a subdivision of the Cisuralian epoch or series. The Artinskian likely lasted between 290.1 and 283.5 million years ago (Ma) according to the most recent revision of the International Commission on Stratigraphy (ICS) in 2013, though older versions of the ICS preferred a younger age range. It was preceded by the Sakmarian and followed by the Kungurian.

In the geologic timescale, the Bajocian is an age and stage in the Middle Jurassic. It lasted from approximately 170.3 Ma to around 168.3 Ma. The Bajocian age succeeds the Aalenian age and precedes the Bathonian age.

The Bartonian is, in the ICS's geologic time scale, a stage or age in the middle Eocene epoch or series. The Bartonian age spans the time between 41.2 and37.8 Ma. It is preceded by the Lutetian and is followed by the Priabonian age.

The Cenomanian is, in the ICS' geological timescale, the oldest or earliest age of the Late Cretaceous epoch or the lowest stage of the Upper Cretaceous series. An age is a unit of geochronology; it is a unit of time; the stage is a unit in the stratigraphic column deposited during the corresponding age. Both age and stage bear the same name.

The Turonian is, in the ICS' geologic timescale, the second age in the Late Cretaceous epoch, or a stage in the Upper Cretaceous series. It spans the time between 93.9 ± 0.8 Ma and 89.8 ± 1 Ma. The Turonian is preceded by the Cenomanian stage and underlies the Coniacian stage.

In the geologic timescale, the Kimmeridgian is an age or stage in the Late or Upper Jurassic epoch or series. It spans the time between 157.3 ± 1.0 Ma and 152.1 ± 0.9 Ma. The Kimmeridgian follows the Oxfordian and precedes the Tithonian.

In the geologic timescale, the Wuchiapingian or Wujiapingian is an age or stage of the Permian. It is also the lower or earlier of two subdivisions of the Lopingian epoch or series. The Wuchiapingian spans the time between 259.1 and 254.14 million years ago (Ma). It was preceded by the Capitanian and followed by the Changhsingian.

A chronozone or chron is a unit in chronostratigraphy, defined by events such as geomagnetic reversals (magnetozones), or based on the presence of specific fossils . According to the International Commission on Stratigraphy, the term "chronozone" refers to the rocks formed during a particular time period, while "chron" refers to that time period.

A system in stratigraphy is a unit of rock layers that were laid down together within the same corresponding geological period. The associated period is a chronological time unit, a part of the geological time scale, while the system is a unit of chronostratigraphy. Systems are unrelated to lithostratigraphy, which subdivides rock layers on their lithology. Systems are subdivisions of erathems and are themselves divided into series and stages. 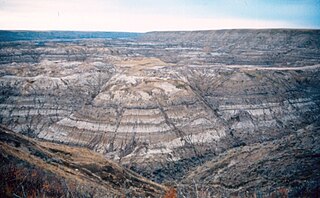 In stratigraphy and geology, an eonothem is the totality of rock strata laid down in the stratigraphic record deposited during a certain eon of the continuous geologic timescale. The eonothem is not to be confused with the eon itself, which is a corresponding division of geologic time spanning a specific number of years, during which rocks were formed that are classified within the eonothem. Eonothems have the same names as their corresponding eons, which means during the history of the Earth only four eonothems were formed. Oldest to newest these are the Hadean, Archean, Proterozoic, and Phanerozoic. A rock stratum, fossil or feature present in the "upper Phanerozoic" eonothem would therefore have originated within the "later Phanerozoic" eon. In practice, the rock column is discontinuous:

Technically, a complete geologic record doesn't occur anywhere. For such a record to develop would require the area to have been receiving sedimentary deposits continually ever since the origin of the earth. Nowhere is such a situation known to exist. If it did exist, we could not effectively look at the strata because they would still be buried, and modern strata would continue to be deposited on top of them. The earth's surface has been far too dynamic to allow that to occur anywhere. No area has been in such a static condition throughout the earth's long history. Areas that have had sediment deposited on them at one time are later uplifted and eroded. In some places this has occurred many times. There is ample evidence to prove such a sequence of events.

In stratigraphy, paleontology, geology, and geobiology an erathem is the total stratigraphic unit deposited during a certain corresponding span of time during an era in the geologic timescale.

Stage 10 of the Cambrian is the still unnamed third and final stage of the Furongian series. It follows the Jiangshanian and precedes the Ordovician Tremadocian stage. The proposed lower boundary is the first appearance of the trilobite Lotagnostus americanus around 489.5 million years ago, but other fossils are also being discussed. The upper boundary is defined as the appearance of the conodont Iapetognathus fluctivagus which marks the beginning of the Tremadocian and is radiometrically dated as 485.4 million years ago.