Last updated August 25, 2022
System of diacritics for the Hebrew Bible

The Tiberian vocalization, Tiberian pointing, or Tiberian niqqud (Hebrew: הַנִּקּוּד הַטְבֶרְיָנִי‎haNīqqūḏ haṬəḇērīyānī) is a system of diacritics ( niqqud ) devised by the Masoretes of Tiberias to add to the consonantal text of the Hebrew Bible to produce the Masoretic Text. [1] The system soon became used to vocalize other Hebrew texts, as well.

The Tiberian vocalization marks vowels and stress, makes fine distinctions of consonant quality and length, and serves as punctuation. While the Tiberian system was devised for Tiberian Hebrew, it has become the dominant system for vocalizing all forms of Hebrew and has long since eclipsed the Babylonian and Palestinian vocalization systems.

The sin dot distinguishes between the two values of ש‎. A dagesh indicates a consonant is geminate or unspirantized, and a raphe indicates spirantization. The mappiq indicates that ה‎ is consonantal, not silent, in syllable-coda position.

The seven vowel qualities of Tiberian Hebrew are indicated straightforwardly by distinct diacritics:

The diacritics qubutz and shuruq both represent /u/, but shuruq is used when the text uses full spelling (with waw as a mater lectionis). Each of the vowel phonemes could be allophonically lengthened; occasionally, the length is marked with metheg. (Then, metheg also can indirectly indicate when a following shva is vocal.)

The ultrashort vowels are slightly more complicated. There were two graphemes corresponding to the vowel /ă/, attested by alternations in manuscripts like ארֲריך~ארְריך, ואשמֳעָה~ואשמְעָה‎.‎. [2] In addition, one of the graphemes could also be silent:

Shva was used both to indicate lack of a vowel (quiescent šwa, shva nah) and as another symbol to represent the phoneme /ă/ (mobile šwa, shva na), the latter also represented by hataf patah. [2] [3] The phoneme /ă/ had a number of allophones; /ă/ had to be written with shva rather than hataf patah when it was not pronounced as [ă]. [4] Before a laryngeal-pharyngeal, mobile šwa was pronounced as an ultrashort copy of the following vowel (וּבָקְעָה‎[uvɔqɔ̆ʕɔ]) and as [ĭ] preceding /j/, (תְדַמְּיוּ֫נִי‎/θăðammĭjuni/). [2] Using ḥataf vowels was mandatory under gutturals but optional under other letters, and there was considerable variation among manuscripts. [5]

That is referenced specifically by medieval grammarians:

If one argues that the dalet of 'Mordecai' (and other letters in other words) has hatef qames, tell him, 'but this sign is only a device used by some scribes to warn that the consonants should be pronounced fully, and not slurred over'.

The names of the vowel diacritics are iconic and show some variation:

The names of the vowels are mostly taken from the form and action of the mouth in producing the various sounds, as פַּ֫תַח‎opening; צֵ֫רֵי‎a wide parting (of the mouth), also שֶׁ֫בֶר‎ (=ĭ) breaking, parting (cf. the Arab. kasr); חִ֫ירֶק‎ (also חִרֶק‎) narrow opening; ח֫וֹלֶם‎closing, according to others fullness, i.e. of the mouth (also מְלֹא פוּם‎fullness of the mouth). קָ֫מֶץ‎ also denotes a slighter, as שׁוּרֶק‎ and קִבּוּץ‎ (also קבוץ פּוּם‎) a firmer, compression or contraction of the mouth. Sĕgôl (סְגוֹל‎bunch of grapes) takes its name from its form. So שָׁלשׁ נְקֻדּוֹת‎ (three points) is another name for Qibbûṣ.
Moreover the names were mostly so formed (but only later), that the sound of each vowel is heard in the first syllable (קָמֶץ‎ for קֹמֶץ‎,‎פַּתַח‎ for פֶּתַח‎,‎צֵרִי‎ for צְרִי‎); in order to carry this out consistently some even write Sägôl, Qomeṣ-ḥatûf, Qübbûṣ.

Cantillation signs mark stress and punctuation. Metheg may mark secondary stress, and maqqaf conjoins words into one stress unit, which normally takes only one cantillation mark on the final word in the unit.

Matres lectionis are consonants that are used to indicate a vowel, primarily in the writing down of Semitic languages such as Arabic, Hebrew and Syriac. The letters that do this in Hebrew are alephא‎, heה‎, wawו‎ and yodי‎, and in Arabic, the matres lectionis are ʾalifا‎, wāwو‎ and yāʾي‎. The 'yod and waw in particular are more often vowels than they are consonants.

Vocalization or vocalisation may refer to:

In Hebrew orthography, niqqud or nikud is a system of diacritical signs used to represent vowels or distinguish between alternative pronunciations of letters of the Hebrew alphabet. Several such diacritical systems were developed in the Early Middle Ages. The most widespread system, and the only one still used to a significant degree today, was created by the Masoretes of Tiberias in the second half of the first millennium AD in the Land of Israel. Text written with niqqud is called ktiv menuqad.

Biblical Hebrew, also called Classical Hebrew, is an archaic form of the Hebrew language, a language in the Canaanite branch of Semitic languages spoken by the Israelites in the area known as the Land of Israel, roughly west of the Jordan River and east of the Mediterranean Sea. The term "Hebrew" (ivrit) was not used for the language in the Bible, which was referred to as שְֹפַת כְּנַעַן or יְהוּדִית, but the name was used in Ancient Greek and Mishnaic Hebrew texts.

Tiberian Hebrew is the canonical pronunciation of the Hebrew Bible (Tanakh) committed to writing by Masoretic scholars living in the Jewish community of Tiberias in ancient Galilee c. 750–950 CE under the Abbasid Caliphate. They wrote in the form of Tiberian vocalization, which employed diacritics added to the Hebrew letters: vowel signs and consonant diacritics (nequdot) and the so-called accents. These together with the marginal notes masora magna and masora parva make up the Tiberian apparatus.

The Hebrew language uses the Hebrew alphabet with optional vowel diacritics. The romanization of Hebrew is the use of the Latin alphabet to transliterate Hebrew words.

Segol is a Hebrew niqqud vowel sign that is represented by three dots forming an upside down equilateral triangle "ֶ ". As such, it resembles an upside down therefore sign underneath a letter. In modern Hebrew, it indicates the phoneme which is similar to "e" in the English word sound in sell and is transliterated as an e.

Shva or, in Biblical Hebrew, shĕwa is a Hebrew niqqud vowel sign written as two vertical dots beneath a letter. It indicates either the phoneme or the complete absence of a vowel (/Ø/).

Pataḥ is a Hebrew niqqud vowel sign represented by a horizontal line ⟨ אַ‎ ⟩ underneath a letter. In modern Hebrew, it indicates the phoneme which is close to the "a" sound in the English word far and is transliterated as an a.

Kamatz or qamatz is a Hebrew niqqud (vowel) sign represented by two perpendicular lines ⟨ ָ ‎ ⟩ underneath a letter. In modern Hebrew, it usually indicates the phoneme which is the "a" sound in the word spa and is transliterated as a . In these cases, its sound is identical to the sound of pataḥ in modern Hebrew. In a minority of cases it indicates the phoneme, equal to the sound of ḥolam. 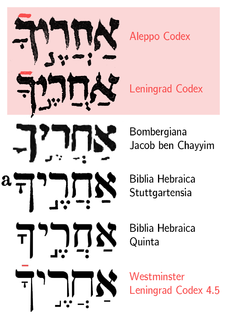 In Hebrew orthography the rafe or raphe is a diacritic, a subtle horizontal overbar placed above certain letters to indicate that they are to be pronounced as fricatives.

Tzere is a Hebrew niqqud vowel sign represented by two horizontally-aligned dots "◌ֵ" underneath a letter. In modern Hebrew, tzere is pronounced the same as and indicates the phoneme /e/ which is the same as the "e" sound in the vowel segol and is transliterated as an "e". There was a distinction in Tiberian Hebrew between segol and Tzere.

Meteg is a punctuation mark used in Biblical Hebrew for stress marking. It is a vertical bar placed under the affected syllable. 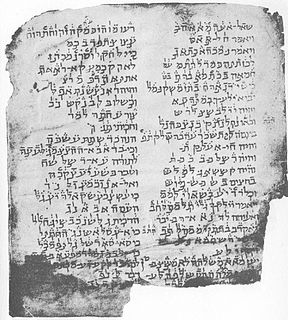 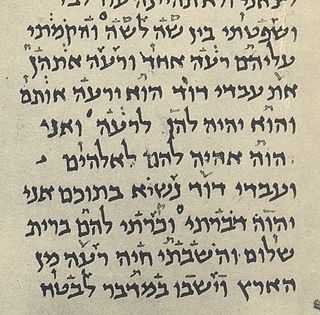 The Babylonian vocalization, also known as Babylonian supralinear punctuation, or Babylonian pointing or Babylonian niqqud Hebrew: נִקּוּד בָּבְלִי‎) is a system of diacritics (niqqud) and vowel symbols assigned above the text and devised by the Masoretes of Babylon to add to the consonantal text of the Hebrew Bible to indicate the proper pronunciation of words, reflecting the Hebrew of Babylon. The Babylonian notation is no longer in use in any Jewish community, having been supplanted by the sublinear Tiberian vocalization. However, the Babylonian pronunciation as reflected in that notation appears to be the ancestor of that used by Yemenite Jews.