It was added to the National Register of Historic Places in 1999. [1]

The Fort Wayne Old City Hall Building in downtown Fort Wayne, Indiana operates as a museum known as The History Center, and has served as headquarters for the Allen County–Fort Wayne Historical Society since 1980. The Richardsonian Romanesque style sandstone building was designed by the architectural firm Wing & Mahurin and built in 1893. It served as a functioning city hall for the city until 1971 when local officials moved to the City-County Building.

McCall Family Farmstead is a historic home and farm complex and national historic district located in Bogard Township, Daviess County, Indiana. The house was built about 1883, and is a two-story, frame I-house with a rear ell. Other contributing resources are a log barn with timber-frame addition, two timber frame barns, a pump house, garage, five concrete fence posts (1906-1908), and the agricultural landscape.

Bromwell Wire Works is a historic industrial complex located at Greensburg, Decatur County, Indiana. The original factory was built in 1903, and is a two-story brick building on a rock-faced ashlar foundation and with a gable roof. It has a heavy timber-frame structure and Victorian style detailing. Also on the property are the contributing 1+1⁄2-story brick boiler house, water tower (1928), and galvanizing shop (1922).

St. John of the Cross Episcopal Church, Rectory and Cemetery is a historic Episcopal church complex located at Bristol, Elkhart County, Indiana. The church was built between 1843 and 1847, and is a one-story, Gothic Revival style frame building. It has a projecting bell tower with octagonal roof and lancet windows. The associated rectory was built in 1830, and is a 1+1⁄2-story, rectangular, Greek Revival style frame dwelling. The complex also includes the contributing church cemetery. 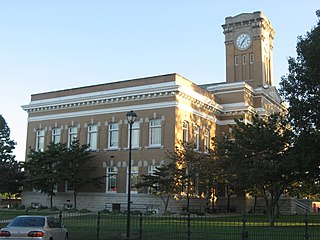 Jackson County Courthouse is a historic courthouse located at Brownstown, Jackson County, Indiana. The original building was built in 1870, and extensively remodeled by Elmer E. Dunlap in the Classical Revival style in 1911. It is a two-story, brick and limestone building consisting of a rectangular main central section with two flanking wings. The building features a four-sided clock tower. Located on the courthouse grounds are the contributing Sherman M-4 memorial tank, the town water pump and bell, and a cast iron fence (1872).

Vincennes Fortnightly Club is a historic Women's club clubhouse located at Vincennes, Knox County, Indiana. It was built in 1928, and is a two-story, Colonial Revival style brick and Indiana limestone building. The tripartite front facade features arched openings and a decorative metal railed balcony on the second floor. The dumbbell shaped building consists of a main entrance block, auditorium, and rear stage section.

John K. Gowdy House, also known as the Rush County Historical Society, is a historic home located at Rushville, Rush County, Indiana. It was built in 1888, and is a two-story, Queen Anne style brick dwelling. It sits on a limestone foundation and has a complex hipped roof with asymmetrically placed gables. It features a wraparound porch and second story porch. Also on the property are the contributing carriage house (1905-1908), summer kitchen (1905-1908), pump, well, and rolled and cast-iron fence. It has housed the Rush County Historical Society since 1940.

Kamm and Schellinger Brewery, also known as 100 Center Complex, is a historic brewery complex located at Mishawaka, St. Joseph County, Indiana. The complex consists of the original Brewery Building, the Stable Building, and the Boiler House with a 262 foot tall brick chimney stack. The original Brewery Building was built in 1853, and is a four-story brick building with additions constructed about 1870 and 1875. It features an elaborate metal cornice, pediment and colonnaded cupola. The brewery cease operations in 1951.

W. N. Bergan–J. C. Lauber Company Building is a historic manufacturing complex located at South Bend, St. Joseph County, Indiana. The original Bergan Building was built in 1882, and is a two-story, Italianate style brick industrial building. It features an ornate cornice and frieze. Also on the property are two one-story contributing brick buildings. The buildings have housed the J. C. Lauber Sheet Metal Company, Inc. since 1900. It was listed on the National Register of Historic Places in 1999.

North Pumping Station is a historic pumping station located at South Bend, St. Joseph County, Indiana. The main building was built in 1912, and is a one-story, rectangular, Classical Revival style brick building. It has a red tile hipped roof and rests on a limestone foundation. It features a projecting entrance pavilion with a pedimented colonnade of four limestone Ionic order columns and limestone trimmed arched window openings. 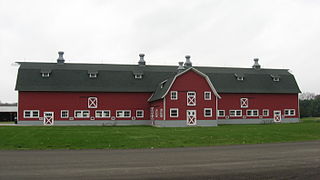 St. Patrick's Farm is a historic barn and farm complex located in Clay Township, St. Joseph County, Indiana. The barn was built about 1925, and is a large, "T"-plan, multi-story, high gambrel roofed frame building. It is sheathed in shiplap siding and has two attached wood silos with conical roofs. Also on the property are the contributing concrete silo, gas pump, windmill, pole barn, and a fenced lot. The farm was originally developed by the Sisters of the Holy Cross, then converted to a park in 1966. 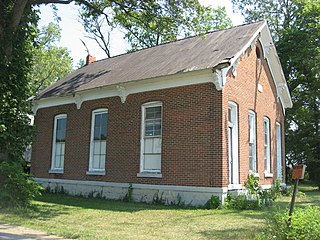 Liberty Township Schoolhouse No. 2 is a historic one-room school building located in Liberty Township, Shelby County, Indiana. It was built in 1875, and is a one-story, rectangular, Italianate style brick building. It has a steep gable-front roof and features heavy scroll brackets, a scalloped frieze, and oculus vent. Also on the property is a contributing water pump. It remained in use as a school until about 1919.

Fort Harrison Terminal Station, also known as Fort Harrison Post Office, is a historic train station located at Fort Benjamin Harrison in suburban Lawrence Township, Marion County, Indiana, northeast of Indianapolis, Indiana. It was built in 1908, and is a one-story, brick building with Prairie School and Bungalow / American Craftsman style design elements. It has a low, double pitched hipped roof sheathed in metal. It served as an interurban terminal until 1941, after which it housed a U.S. Post Office. It has been converted into a Mexican restaurant. 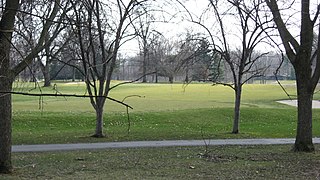 Hillcrest Country Club, also known as Avalon Country Club, is a historic country club located in suburban Lawrence Township, Marion County, Indiana, northeast of Indianapolis, Indiana. The 18 hole golf course was designed by Bill Diddel and was built in 1924. The clubhouse was built in 1929–1930, and renovated in 2000. It is a three-story, Mission Revival style with tall arched openings, and a low tile roof with bracketed eaves. Also on the property are the contributing swimming pool (1934), well house, and water pump.

Old Indianapolis City Hall, formerly known as the Indiana State Museum, is a historic city hall located at Indianapolis, Indiana. It was built in 1909–1910, and is a four-story, Classical Revival style brick building sheathed in Indiana limestone. It measures 188 feet by 133 feet.

West Washington Street Pumping Station is a historic pumping station located at Indianapolis, Indiana. It was built in 1870–1871, and is a one-story, rectangular brick building. It was modified to its present form after 1909, and is 2/3 of its original size. It has a slate hipped roof topped by a square central tower and features distinctive brick detailing, and arched openings. The building served as the city's only water pumping station until 1890.

H. Lauter Company Complex, also known as J. Solotken Company, Lauter Lofts, and Harding Street Lofts, is a historic factory complex located at Indianapolis, Indiana. It was built between 1894 and 1912, and includes the South Factory, the North Factory, and the Office Building. The factory buildings are in the Italianate and the office building is in the Classical Revival style. The North Factory is a four-story brick building with a raised full basement constructed sometime between 1908 and 1912. The Office Building is a two-story brick building constructed between 1899 and 1908 and has a truncated hipped roof. The four-story, "U"-shaped core of the South Factory was built in two phases; the eastern portion between 1894 and 1898 and the western portion in 1899. The H. Lauter Company furniture manufacturer began in 1894 and they continued to operate at the location until 1936. The buildings have been converted to condominiums and apartments.