Tiger is a former populated place in Pinal County in the U.S. state of Arizona. The town was settled as Schultz around 1881 in what was then the Arizona Territory, then later reestablished as Tiger after World War I. [1]

The area that was to become Tiger was first settled in 1881 after Frank Schultz located gold ore in what was to become the Mammoth Mine. The camp that settled around the mine took the name Schultz, and a post office was established under that name on July 12, 1894. [1] [3]

Since water, needed for refinement of ore, was not present near the mine, a mill was established 4 miles (6.4 km) away on the west bank of the San Pedro River, in a town that came to be known as Mammoth, after the mine and the mill. The ore was hauled to the mill by way of mule teams, until just after the start of the 20th century when an aerial tram was completed between the Mammoth Mine and the Mammoth Mill. As the tram's construction neared completion, and the need for the town waned, the Schultz post office was closed on May 1, 1902. [1]

The mines reopened in 1915 due to World War I's increased demand for the molybdenum and vanadium found in the area. When the war was over, the prices fell, and the mines closed again in 1919. [4] Shortly thereafter, the Mammoth Mine property was purchased by Sam Houghton, who renamed both the mine and the town after his college mascot, the Princeton Tiger. [1] When the price of gold increased in 1933, [4] the town again grew in prosperity, and the new Tiger post office opened on March 1, 1939. It was as Tiger that the town reached its peak in the early 1950s. Soon after, the local mines, as well as the town of Tiger, had run their course, and the post office was discontinued on November 26, 1954. [1]

After the San Manuel Copper Company acquired the land, they demolished all remaining structures in order to mine the silica on site for its gold content and as flux material for the San Manuel Smelter. However, the material contained too much lead, and the plan proved fruitless. As such, nothing is left of the town of Tiger today, but the filled-in shaft of the Mammoth mine in the middle of town. [1] [5]

The Tiger or Mammoth mine is a famous mineral locality, especially for matlockite [6] and wulfenite. In addition, the mineral yedlinite is a hydrated oxychloride of lead and chromium found only at Tiger, and first noted on preexisting specimens in 1967. [7]

The various mines at Mammoth and Tiger had combined recorded production of around:

US Census data places the population of the town at 500 in 1940 after its re-founding as Tiger, and 783 in 1950. [9] It was after this final census that the town is said to have reached its peak population of approximately 1,800 residents, before heading into permanent decline and abandonment. [1] 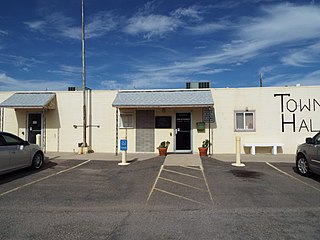 Mammoth is a town in Pinal County, Arizona, United States. The population was 1,426 at the 2010 census; according to 2018 Census Bureau estimates, the population of the town is 1,650.

Murdochite is a mineral combining lead and copper oxides with formula PbCu6O8−x(Cl,Br)2x(x ≤ 0.5).

Phosgenite is a rare mineral consisting of lead chlorocarbonate, (PbCl)2CO3. The tetragonal crystals are prismatic or tabular in habit: they are usually colorless and transparent, and have a brilliant adamantine lustre. Sometimes the crystals have a curious helical twist about the tetrad or principal axis. The hardness is 3 and the specific gravity 6.3. The mineral is rather sectile, and consequently was earlier known as corneous lead, (German Hornblei).

The Silver Valley is a region in the northwest United States, in the Coeur d'Alene Mountains in northern Idaho. It is noted for its mining heritage, dating back to the 1880s.

Placerville is an unincorporated community and a U.S. Post Office located in San Miguel County, Colorado, United States. The Placerville Post Office has the ZIP Code 81430.

Spenazuma was a short-lived mining town, now a ghost town, in Graham County, Arizona, United States. The townsite is now privately owned, and the site of a working ranch. 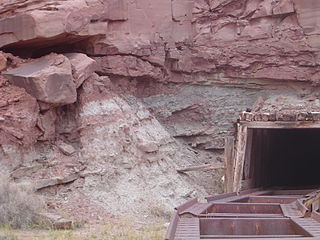 The Castle Dome Mountains are a mountain range in Yuma County, Arizona, within the Kofa National Wildlife Refuge. Castle Dome Peak, the high point of the range, is a prominent butte and distinctive landmark. The peak is 3,776 feet (1,151 m) high, and is located at 33°05′04″N114°08′36″W. Castle Dome was named by American soldiers at old Fort Yuma in the 1880s. Early Spanish explorers called the same peak Cabeza de Gigante, "Giant's Head."

Castle Dome Landing, Arizona is a ghost town in the Castle Dome Mountains of Yuma County in the U.S. state of Arizona. It was first settled as a transport depot and mining camp around 1863 in what was then the Arizona Territory.

Harshaw is a populated place in Santa Cruz County in the southeastern part of the U.S. state of Arizona. The town was settled in the 1870s, in what was then Arizona Territory. Founded as a mining community, Harshaw is named after the cattleman-turned-prospector David Tecumseh Harshaw, who first successfully located silver in the area. At the town's peak near the end of the 19th century, Harshaw's mines were among Arizona's highest producers of ore, with the largest mine, the Hermosa, yielding approximately $365,455 in bullion over a four-month period in 1880.

The San Manuel Copper Mine was a surface and underground porphyry copper mine located in San Manuel, Pinal County, Arizona. Frank Schultz was the original discoverer, in 1879, but the main body of the deposits were discovered by Henry W. Nichols in 1942. The exploration drilling went on from 1943 to 1948, with the first mine shaft built 1948. Louis Lesser developed a mining city to service Nichols’ newly discovered deposits, and the development was completed about 1954. The first major production began in 1955, and the mine and smelter were permanently closed in 2003.

Matlockite is a rare lead halide mineral, named after the town of Matlock in Derbyshire, England, where it was first discovered in a nearby mine. Matlockite gives its name to the matlockite group which consists of rare minerals of a similar structure.

Georgerobinsonite, named for George Willard Robinson, is a lead chromate mineral with formula Pb4(CrO4)2(OH)2FCl. It exhibits very small, transparent crystals with a bright orange-red color. It was obtained from the Mammoth-St. Anthony Mine in Arizona in the 1940s and identified in 2009.

Mammothite is a mineral found in the Mammoth mine in Tiger, Arizona and also in Laurium, Attika, Greece. This mineral was named in 1985 by Donald R. Peacor, Pete J. Dunn, G. Schnorrer-Köhler, and Richard A. Bideaux, for the Mammoth vein (one of the two main veins in the mine) and the town of Mammoth, Arizona, which was named for the mine. The mammothite that is found in Arizona exist as euhedral crystals imbedded in micro granular, white colored anglesite with a sacharoidal texture. The associated minerals include phosgenite, wulfenite, leadhillite and caledonite. In Greece, the mammothite exists as small euhedral crystals and also as microscopic rock cavities lined with projecting crystals within the slags. The associated minerals here are cerussite,phosgenite and matlockite. The ideal chemical formula for mammothite is Pb6Cu4AlSb5+O2(OH)16Cl4(SO4)2.