Last updated September 24, 2022
Highly venomous snake native to southern Australia and Tasmania
Not to be confused with the tiger rattlesnake.
For the African snake, see Telescopus semiannulatus.

Tiger snakes (Notechis scutatus) are a large and highly venomous snake of southern Australia, including its coastal islands and Tasmania. These snakes are often observed and locally well known by their banding, black and yellow like a tiger, although the species can be highly variable in coloration and patterning. All populations are classified within the genus Notechis (Elapidae). Their diverse characteristics have been classified either as distinct species or by subspecies and regional variation.

While tiger snakes are usually ground-dwelling, they are able to swim as well as climb into trees and buildings. [4] [5]

The genus Notechis is allied to the elapid family, venomous snakes with fixed front fangs. The classification of this genus is given as a single and highly variable species, Notechis scutatus, or a second species Notechis ater , and by an arrangement of subspecies or regional morphs. [5]

A 2016 genetic analysis showed that the closest relative of the tiger snakes is the rough-scaled snake (Tropidechis carinatus). [6]

The two extensively recognized species of this genus are Notechis scutatus (Peters, 1861) and Notechis ater (Krefft, 1866), which show further variety in their characteristics. [2] Several authors have published revisions or described subspecies of these species. [7] Others consider the names contained by this taxonomic arrangement to be unwarranted, and describe Notechis as a monotypic genus. [8] Various authorities accept some or all the systematics previously applied, but most agree a revision of the genus is needed. [7] Names for these subdivisions include the western types, appended to both species names as occidentalis (Glauert 1948) The island groups have also been described as subspecies: Chappell Island tiger snake as N. ater serventyi (Warrell, 1963), King Island and Tasmanian tiger snakes subspecies as N. ater humphreysi, (Warrell, 1963) and the Peninsula tiger snake as N. ater niger (Kinghorn 1921).

* Not including the nominate subspecies (typical form).

Notechis is a genus of large venomous snakes in the family Elapidae restricted to subtropical and temperate regions of Australia. Tiger snakes are a large group of distinct populations, which may be isolated or overlapping, with extreme variance in size and colour. Individuals also show seasonal variation in colour. The total length is typically about 1.2 metres (3 ft 11 in) [10] The patterning is darker bands, strongly contrasting or indistinct, which are pale to very dark in colour. Colouration is olive, yellow, orange-brown, or jet-black, and the underside of the snake is light yellow or orange. Tiger snakes use venom to kill prey, and may also bite an aggressor; they are potentially fatal to humans. Tolerant of low temperatures, the snake may be active on warmer nights. [8] When threatened, they flatten their bodies and raise their heads above the ground in a classic prestrike stance.

The widely dispersed populations (sometimes referred as polymorphs) show some conformity in their descriptions, but these characters may be shared by separate or adjacent groups. Tiger snakes are also identified by the region or island in which the forms occur, which is prefixed to a common name.

The common tiger snake has a flat, blunt head, slightly distinct from a robust body. Its body is capable of being flattened along its entire length when the snake is agitated or basking. Its average length is 0.9 m (2 ft 11 in), with a maximum length of 1.2 m (3 ft 11 in), but has been recorded at 2 m (6 ft 7 in). Highly variable in colour, its base colours are brown, grey olive, or green with lighter crossbands usually of creamy yellow. Occasionally, unbanded specimens are found. [11] Scales appear like overlapping shields, especially around the neck. Ventral scales number 140 to 190, subcaudals 35 to 65, mid-body in 17 or 19 rows and the anal scale is single.

The King Island and Tasmanian tiger snakes each have a blunt head distinct from a robust body. Younger snakes may be slimmer and similar to other tiger snakes, eventually growing up to 1.5 m (4 ft 11 in) in length. Dorsally, they may be jet black, jet black with lighter crossbands, grey with black flecks forming faint bands, or an unbanded grey or brown. The ventral surface is usually a lighter colour. Midbody scales are in 19, 17 or sometimes 15 rows, ventrals number 161 to 174, subcaudals 48 to 52 (single) and the anal scale is single. Tasmanian tiger snakes tend to be quiet snakes, probably due to the lower temperature ranges they inhabit.

The Peninsula tiger snake has a blunt head distinct from a robust body; it averages 1.1 m (3 ft 7 in) in length. Roxby Island specimens are much smaller, averaging 0.86 m (2 ft 10 in) in length. Dorsally, it is generally jet black, sometimes with white or cream markings around the lips and chin. On Kangaroo Island, specimens are highly variable in colour, often exhibiting banding and uniform brown colours. The ventral surface is dark grey to black, with some specimens on Kangaroo Island even possessing red bellies. The ventral surface becomes much lighter prior to shedding. Juveniles nearly always have banding. Midbody scales are in 17, 18, 19 and rarely 21 rows, ventrals number 160 to 184, subcaudals 45 to 54 (single) and the anal scale is single.

As with most snakes, the colours vary widely between individuals and are an unreliable means of identifying subspecies. Accurate identification is best performed with a venom test kit or scale count.

Tiger snakes give birth to 20 to 30 live young; an exceptional record was made of 64 from an eastern female. [8] They usually mate in spring when it is in the warmer seasons and will give birth to live young in summer.

Tiger snakes are usually found in coastal regions, where they favour wetlands, creeks, dams, and other habitat around watercourses, or at shelter near permanent sources of water in pastoral areas. [5] Habitat providing an abundance of prey can support large populations. The species' distribution extends from the south of Western Australia through to South Australia, Tasmania, up through Victoria, and New South Wales. Its common habitat includes the coastal areas of Australia.

Tiger snakes accounted for 17% of identified snakebite victims in Australia between 2005 and 2015, with four deaths recorded from 119 confirmed envenomations. [12]

Tiger snake venoms possess potent neurotoxins, coagulants, haemolysins, and myotoxins. Symptoms of a bite include localized pain in the foot and neck region, tingling, numbness, and sweating, followed by a fairly rapid onset of breathing difficulties and paralysis. In a study, the mortality rate from untreated bites is reported to be between 40 and 60%. [13] [14]

Treatment is the same for all Australian venomous snakes. The pressure immobilization method is used to inhibit the flow of venom through the lymphatic system. Broad, thick bandages are applied over the bite, then down and back along the limb to the armpit or groin. The affected limb is then immobilized with a splint. Identification of the venom is possible if traces are left near the wound. Identifying the snake is not necessary if bitten in Tasmania, because the same antivenom is used to treat all Tasmanian snakes' bites. The availability of antivenom has greatly reduced the incidence of fatal tiger snake bites. Among the number of deaths caused by snakebite in Australia, those from tiger snakes are exceeded only by the brown snake. [15] The venom yield is 35-65 mg, while the lethal dose for humans is 3 mg. [16]

In most Australian states, they are protected species, and to kill or injure one incurs a fine up to $7,500, as well as a jail sentence of 18 months in some states. [17] It is also illegal to export a native Australian snake.

The eastern copperhead, also known as the copperhead, is a species of venomous snake, a pit viper, endemic to eastern North America; it is a member of the subfamily Crotalinae in the family Viperidae.

The boomslang is a large, highly venomous snake in the family Colubridae. 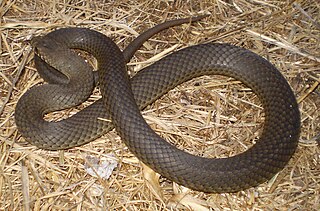 The pygmy copperhead is an Australian venomous elapid snake species found on Kangaroo Island and the Fleurieu Peninsula in South Australia. It is from the Austrelaps genus along with two other species of copperhead, the Highland and Lowland copperhead snakes. 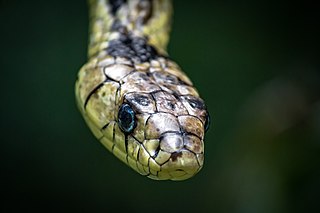 Boiga andamanensis, known commonly as the Andaman cat snake, is a species of rear-fanged mildly venomous snake in the family Colubridae. The species is endemic to the Andaman Islands.

Boiga dendrophila, commonly called the mangrove snake or the gold-ringed cat snake, is a species of rear-fanged venomous snake in the family Colubridae. The species is endemic to southeast Asia. It is one of the biggest cat snake species, averaging 6–7 feet in length. It is considered mildly venomous. Although moderate envenomations resulting in intense swelling have been reported, there has never been a confirmed fatality. 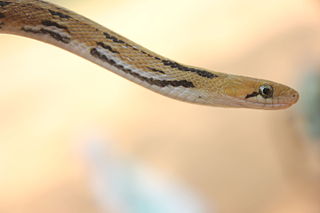 The greater black krait or black krait, is a species of krait, a venomous snake in the genus Bungarus of the family Elapidae. The species is endemic to South Asia. 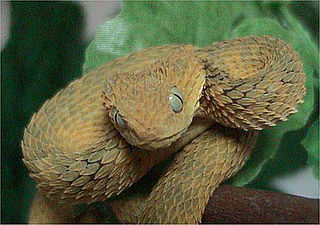 Atheris squamigera is a venomous viper species endemic to west and central Africa. No subspecies are currently recognized.

Günther's black snake, Bothrolycus ater, is a species of poorly known lamprophiid snake endemic to central Africa. It is the only member of the genus, Bothrolycus. This snake is notable as one of the few snakes with notable sexual dimorphism, as well as possessing a small pit anterior to the eye. While superficially similar to the thermal pits of vipers, its function remains unknown. 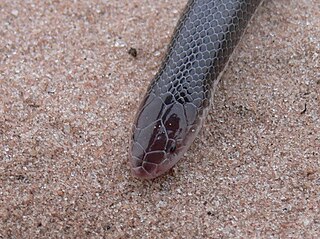 Atractaspis bibronii is a species of venomous snake in the family Atractaspididae. The species is endemic to Africa. There are no subspecies that are recognized as being valid. 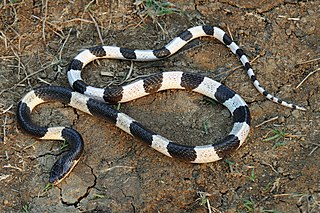 Bungarus candidus, commonly known as the Malayan krait or blue krait, is a highly venomous species of snake. The blue krait is a member of the genus Bungarus and the family Elapidae. 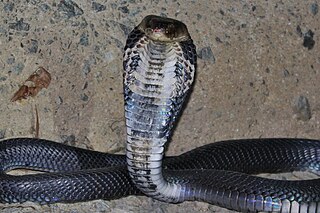 The Chinese cobra, also called the Taiwan cobra, is a species of cobra in the family Elapidae, found mostly in southern China and a couple of neighboring nations and islands. It is one of the most prevalent venomous snakes in China and Taiwan, which has caused many snakebite incidents to humans.

The many-banded krait, also known as the Taiwanese krait or the Chinese krait, is a venomous species of elapid snake found in much of central and southern China and Southeast Asia. The species was first described by the scientist Edward Blyth in 1861. Averaging 1 to 1.5 m in length, it is a black or bluish-black snake with many white bands across its body. The many-banded krait mostly inhabits marshy areas throughout its geographical distribution, though it does occur in other habitat types.

The rinkhals, also known as the ringhals or ring-necked spitting cobra, is a species of venomous snake in the family Elapidae. The species is found in parts of southern Africa. It is not a true cobra in that it does not belong to the genus Naja, but instead belongs to the monotypic genus Hemachatus. While rinkhals bear a great resemblance to true cobras they also possess some remarkable differences from these, resulting in their placement outside the genus Naja. 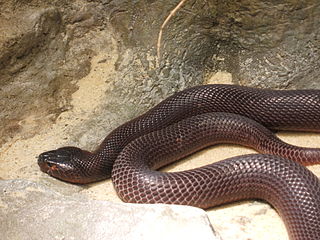 The snouted cobra, also called the banded Egyptian cobra, is a highly venomous species of cobra found in Southern Africa. 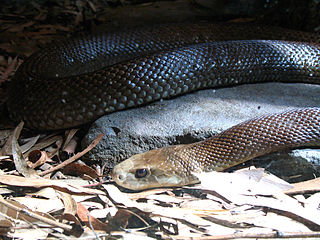 The coastal taipan, or common taipan, is a species of highly venomous snake in the family Elapidae. Described by Wilhelm Peters in 1867, the species is native to the coastal regions of northern and eastern Australia and the island of New Guinea. The second-longest venomous snake in Australia, the coastal taipan averages around 2 m (6.6 ft) long, with the longest specimens reaching 2.9 m (9.5 ft) in length. It has light olive or reddish-brown upperparts, with paler underparts. The snake is considered to be a least-concern species according to the International Union for Conservation of Nature.

Anchieta's cobra, sometimes referred to as the Angolan cobra, is a species of venomous snake in the family Elapidae. The species is native to Southern Africa. 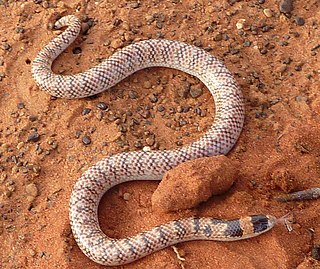 Brachyurophis fasciolatus is a species of snake from the family Elapidae, commonly named the narrow-banded shovel-nosed snake, or narrow-banded burrowing snake, and is a species endemic to Australia. Its common names reflect its shovel nose specialization, burrowing behaviour and banded body colour.