The station was opened in 1856 by the London and South Western Railway (LSWR) as one of two intermediate stops on a now-closed section of the LSWR's Guildford to Alton line.

Architecturally, Tongham station was similar to Ash Green Halt in that the main station building was situated at street level on a road bridge crossing the line, with a covered staircase leading down to the Up platform. The station was equipped with two platforms, with several sidings to the east of the station as well as the line to the Gas Works which led off to the north-west from the Up line; a short siding also led into Hyde's dog biscuit factory situated to the west of the station. [3]

Tongham station, along with Farnborough (Main), was one of the first railheads for the military traffic associated with the recently established army camps at Aldershot. [4] Its significance was drastically reduced, both as a station and as part of a through route, with the opening of Aldershot railway station in 1870 on a new more direct line from Pirbright Junction on the London to Basingstoke line which linked with the Guildford to Alton line between Tongham and Farnham, effectively bypassing the short section. [5] This was followed in 1879 by the laying of a spur from Ash to Aldershot which had the effect of diminishing the Guildford to Farnham traffic. [6]

Although a short branch was laid from Tongham to serve the nearby Aldershot Gas Works in 1898, the line became a forgotten byway and was singled in 1930. Passenger services ceased in 1937 as a consequence of electrification of other lines in the vicinity, but Tongham remained open to serve the Gas Works until its closure in 1954. [7] With the closure of the Gas Works, British Railways decided that the twice-weekly goods service was no longer justified and the last service ran on 31 December 1960. [8]

The station has been demolished and the course of the line to the west is largely taken up by the A331 "Blackwater Valley Relief Road" which links the A31 Hogs Back Road with the M3 motorway. A footpath passes to the west of the station. The road bridge which crossed the former railway line was demolished in 1994. [9] 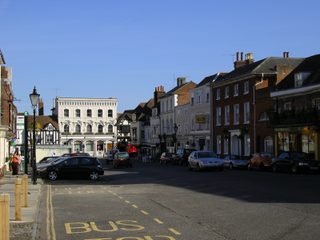 Farnham is a market town in Surrey, England, within the Borough of Waverley. The town is 35 miles (56 km) southwest of London in the extreme west of Surrey, adjacent to the border with Hampshire. By road, Guildford is 11 miles (17 km) to the east and Winchester a further 28 miles (45 km) along the same axis as London. Farnham is the largest town in Waverley, and one of the five largest conurbations in Surrey. It is of historic interest, with many old buildings, including a number of Georgian houses. Farnham Castle overlooks the town. A short distance southeast of the town centre are the ruins of Waverley Abbey, Moor Park House and Mother Ludlam's Cave. Farnham is twinned with Andernach in Germany. It is drained by the River Wey which is navigable only to canoes at this point. 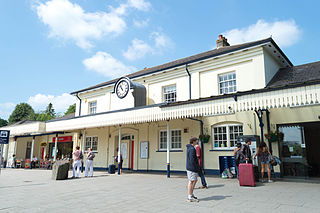 Winchester railway station is a railway station in Winchester in the county of Hampshire, England. It is on the South Western Main Line and was known as Winchester City from 1949-67 to distinguish it from Winchester (Chesil) station. It is 66 miles 39 chains (107.0 km) down the line from London Waterloo. 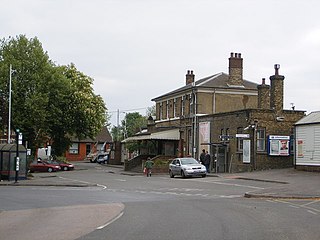 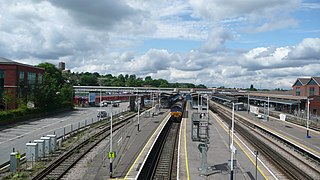 Guildford railway station is at one of three main railway junctions on the Portsmouth Direct Line and serves the town of Guildford in Surrey, England. It is 30 miles 27 chains (48.8 km) down the line from London Waterloo. 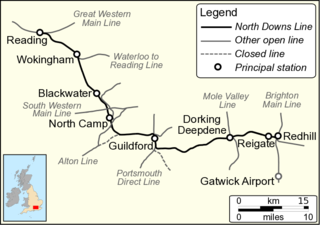 The North Downs Line is a passenger-train line connecting Reading, on the Great Western Main Line, to Redhill and Gatwick Airport, along the Brighton Main Line, linking many centres of population in that part of the North Downs which it traverses en route. 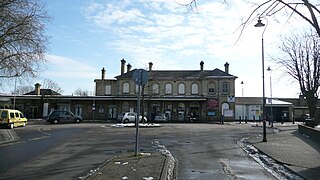 Aldershot railway station is located near the town centre of Aldershot in Hampshire, England. It is 35 miles (56 km) down the line from London Waterloo. It is on the Alton Line, part of the National Rail network, with train services and station facilities provided by South Western Railway. 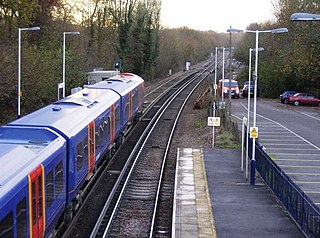 The Alton line is a railway line in Hampshire and Surrey, England, operated by South Western Railway as a relatively long branch of the South Western Main Line. 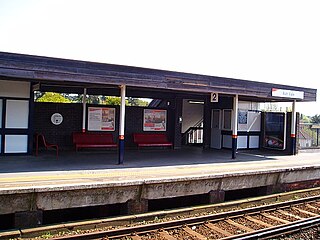 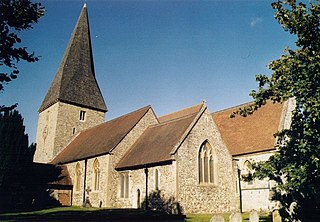 Ash is a village and civil parish in the far west of the borough of Guildford, Surrey. Ash is on the eastern side of the River Blackwater, with a station on the Reading-Guildford-Gatwick line, and direct roads to Aldershot, Farnham and Guildford. The 2011 census counted the residents of the main ward of Ash, which excludes Ash Vale, as 6,120. It is within the Aldershot Urban Area and adjoins the riverside in the east of that large town; Ash has a small museum, large secondary school and a library. 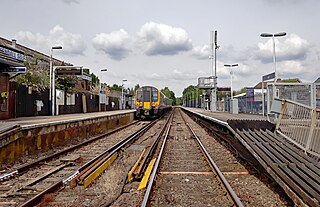 Ash railway station serves the village of Ash in Surrey, England. The station is served by South Western Railway, who manage the station, and by Great Western Railway. It is situated on the Ascot to Guildford line and the North Downs Line, 36 miles 34 chains (58.6 km) from London Waterloo.

The Bordon Light Railway was a short-lived light railway line in Hampshire that connected the Army Camp at Bordon, as well as the villages of Bordon and Kingsley, with the national rail network at Bentley on the main Farnham-Alton line, a distance of 4.5 miles (7.2 km).

The Ascot–Ash Vale line is a railway line in South East England running from Ascot to Ash Vale.

The Meon Valley Railway (MVR) was a cross-country railway in Hampshire, England that ran for 22 1⁄4 miles (35.8 km) between Alton and Fareham, closely following the course of the River Meon. At its northern (Alton) end, it joined with the Mid-Hants Railway to Winchester, the Alton Line to Brookwood and the Basingstoke and Alton Light Railway. At Fareham it linked with the Eastleigh to Fareham Line, the West Coastway Line and the line to Gosport. The railway was authorised in 1896 and opened in 1903, making it one of the last railways of any size to be built to main-line standards in the United Kingdom. Passenger services were withdrawn after 5 February 1955, and the line was closed completely on 13 August 1968.

The Salisbury and Dorset Junction Railway was a railway that ran in the English counties of Wiltshire, Hampshire and Dorset from 1866 until its closure in 1964. Working from Salisbury, trains left the Salisbury to Southampton line at the remote Alderbury Junction. Here there was a signal box, some railway cottages and two platforms on the main line for staff use only. The line ambled south through rural surroundings to meet the Southampton and Dorchester Railway at West Moors. Trains continued through Wimborne to Poole and Bournemouth West.

The Cranleigh line was a linking railway line that connected Guildford on the Portsmouth-London line, the county town of Surrey, with the West Sussex market town of Horsham on another line to the south coast. The line ran through Cranleigh and measured 19.25 miles (31 km). The line closed on 14 June 1965 four months before its centenary, the only Surrey railway closure in the mid-1960s stripping out known as the Beeching Axe, officially termed "The Reshaping of British Railways".

Southfleet was a railway station on the Gravesend West Line which served the small village of Southfleet in Kent, England. 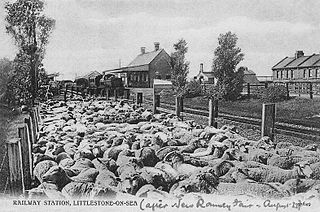 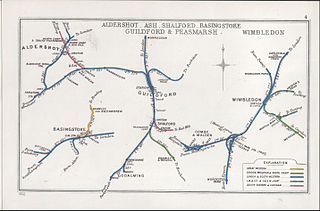 Ash Green Halt railway station known for a time as Ash Green, served the village of Ash, Surrey in England original route of the Alton Line which ran from London via the town of Guildford to the east. 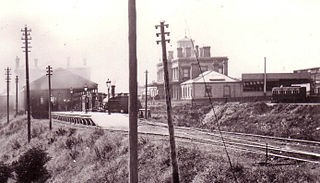 Reading Southern railway station was opened as the western terminus of the South Eastern Railway's route from Redhill, a junction station at the time of opening known as Reigate Junction in south-east Surrey, having direct links thence to Dover port, Brighton and London Bridge. The station was referred to for exactly one century by an identical name to its neighbour, 'Reading', until 1949. Seven years after its opening the station expanded its uses by becoming the terminus of a new company's Waterloo to Reading line from London Waterloo station. This mid-length line added to the town's connections with more intermediate stops, beyond nearby Wokingham and mid-south parts of Surrey which had been directly served by the station and added a competing service, approximately one third longer in distance to a London terminus than the adjacent Great Western Railway. 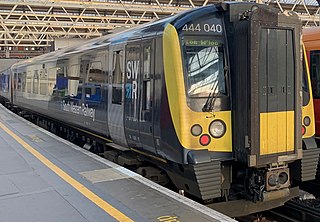 South Western Railway (SWR) is a British train operating company owned by FirstGroup (70%) and MTR Corporation (30%) that operates the South Western franchise. It operates commuter services from its Central London terminus at London Waterloo to South West London. SWR provides suburban services in the counties of Surrey, Hampshire and Dorset, as well as regional services in Devon, Somerset, Berkshire and Wiltshire. Its subsidiary Island Line operates services on the Isle of Wight.