Tonteg Halt refers to two railway stations serving the township of Tonteg in Rhondda Cynon Taf, Wales. They were located on the Llantrisant and Taff Vale Junction Railway and latterly on the Barry Railway under the Great Western Railway. [1] [2]

The station on the Taff Vale/Llantrisant and Taff Vale Junction Railway was opened on 1 May 1905, originally being named Tonteg Platform; [3] and extended in length on 7 October 1910. The station consisted of a single platform accessed via a still existing footpath from the road. Immediately to the east of the station was a small stone bridge over said road. On 1 October 1923, it was renamed Tonteg Halt. [3] This station existed until 5 May 1930 when it was closed [3] along with the line from Tonteg Viaduct to Llantrisant Junction because of the construction of a chord from Tonteg Viaduct to Tonteg Junction to connect with the Barry Railway. This new chord was brought into use on 5 May 1930, at the same time the chord to Llantrisant Junction closed.

Nothing remains of this halt after the construction of the Church Village bypass. According to photographs, the site was recognisable as a station, though barely around 1950.

A station called Tonteg Halt existed at Tonteg Junction on the Barry Railway for the month of May in 1905 (1.5.1905-31.5.1905).[ citation needed ] The station consisted of two platforms. A signal box existed here for Tonteg Junction.

This new station opened on 5 May 1930 [3] at Tonteg Junction after the short branch to Llantrisant Junction on the Taff Vale Railway was closed and the route realigned through Tonteg Junction. The station consisted at this time of three platforms, one the Pontypridd-Llantrisant branch and two offset platforms on the Barry Railway. Small shelters were provided and access was from the road bridge crossing the station at this point.

There were sidings both on the Barry line to the south-west and also at the junction area to the east, these latter sidings were closed on 20 April 1958.

Trains coming from Llantrisant had no direct access across the rail junction to the Trehafod line.

The Trehafod line closed in 1951 and was taken out of use in 1958. Two dates are given for the closure of Tonteg Halt, the first being 31 March 1952 which refers to the Pontypridd-Llantrisant platform [3] (though according to timetables, trains still stopped here on this line), and final closure of the lines and whole station occurred on 10 September 1962. [3]

The Barry Railway route through the station officially closed on 2 December 1963 and the Llantrisant branch on 28 September 1964.

The GWR 1949 timetable [4] [5] shows services over both the Llantrisant and Taff Vale and Barry lines. A typical week day saw 8 services to Llantrisant, 3 services to Barry Island, 1 to Barry, 1 to Cardiff General, 3 to Cardiff Clarence Road and a total of 17 services returning to Pontypridd.

The immediate area of the station still exists but the original site of Tonteg Junction and sidings have been removed for the construction of the Church Village bypass. The original station area and road bridge can be seen from Tonteg now that clearance of land, landscaping and the construction of the Church Village by-pass has been completed, though the rail junction area has been extensively landscaped (comparisons with photographs in the external links section can be made).

The original TVR halt can be accessed using a gate onto a footpath at Pount Farm Lane. The area is extensively overgrown and little discernable trace is left. No trace of the bridge over Pound Farm Lane exists anymore. The bridge abutments were still extant until the construction of the bypass. 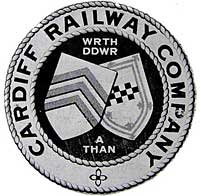 Radyr railway station is a railway station serving the Radyr area of Cardiff, South Wales. It is at the foot of the hill at the eastern edge of the village, alongside the River Taff and adjacent to the Taff Trail. The station is on the Merthyr Line, and is also the northern terminus of the City Line.

Pontypridd Graig railway station was a railway station located in the South Wales valleys town of Pontypridd, on the Barry Railway. Although the line was opened for mineral traffic on 8 July 1889 to take coal from Rhondda to the Docks, the passenger service did not start until 16 March 1896 after much lobbying from local residents along the line. On that date, Barry services commenced between the Taff Vale station at Porth and Barry where the train terminated in the bay platform. On 7 June 1897, a new passenger service began between Pontypridd and Cardiff Clarence Road via St Fagans and Cardiff Riverside. Train journeys commenced at Pontypridd because the Taff Vale was not willing to allow direct competition with its own services from Porth to Cardiff Queen Street. The station was closed to passengers on 10 July 1930 by the GWR who diverted trains via Treforest Junction to its main station at Pontypridd Central.

Pontyclun railway station is an unstaffed, minor railway station in Pontyclun, in the County Borough of Rhondda Cynon Taf, South Wales. The station is at street level, on Station Approach, Pontyclun. It is a stop on the South Wales Main Line, served by trains on the Maesteg Line, and occasionally by the Swanline Cardiff to Swansea regional services, as well as one early-morning daily service to Manchester and a late-night daily service to Carmarthen. The station and all trains are operated by Transport for Wales Rail.

Cadoxton railway station is a railway station serving Cadoxton and Palmerstown near Barry, Vale of Glamorgan, South Wales. It is located on the Barry Branch 6½ miles (10 km) south of Cardiff Central. The line continues to the terminus of the Barry Branch at Barry Island but from Barry Junction the line also continues as the Vale of Glamorgan branch to Bridgend via Rhoose for Cardiff International Airport bus link and then Llantwit Major.

The Barry Railway Company was a railway and docks company in South Wales, first incorporated as the Barry Dock and Railway Company in 1884. It arose out of frustration among Rhondda coalowners at congestion and high charges at Cardiff Docks as well the monopoly held by the Taff Vale Railway in transporting coal from the Rhondda. In addition, the Taff Vale did not have the required capacity for the mineral traffic using the route, leading to lengthy delays in getting to Cardiff.

The Pontypridd, Caerphilly and Newport Railway was built to bring the coal output of the Aberdare and Rhondda valleys directly to Alexandra Docks at Newport.

The Llancaiach Branch railway line was a mineral branch line in Glamorganshire, South Wales. It was authorised in 1836 as part of the Taff Vale Railway, and its purpose was to connect collieries at Llancaiach and bring their output to Cardiff for onward shipment. It was designed by Isambard Kingdom Brunel and built on the standard gauge. It opened in 1841 from a junction with the Merthyr line immediately south of Abercynon. It was intended to be horse worked, and included a self-acting rope-worked inclined plane near the junction. The collieries were slow to use the line, preferring their customary use of a tramroad and the Glamorganshire Canal, and the value of the line was diminished when the Taff Vale Extension line, an east-west connecting line belonging to the Newport, Abergavenny and Hereford Railway, intersected it and cut off the colliery connections, and the line became dormant.

Church Village Halt railway station was a small halt on the Llantrisant and Taff Vale Junction Railway. The station was just south of the crossroads in the village on the road to Efail Isaf.

Treforest High Level railway station was located north of Llantwit Road in Treforest. The station consisted of two platforms with four lines - two central running lines while the platforms were on loops at this point.

Walnut Tree Viaduct was a railway viaduct located above the southern edge of the village of Taffs Well, South Wales. Originally built to carry the Barry Railway across a narrow gorge through which the River Taff, Taff Vale Railway and Cardiff Railway passed, it was deconstructed in 1969, leaving only two of the support columns visible from the A470 road.

The Llantrisant – Aberthaw line was a railway line built in two parts.

The Ynysybwl branch line railway, formally known as the Clydach Valley Branch, was opened by the Taff Vale Railway company in 1885 to serve collieries that were expected to open in the Clydach Valley, Glamorganshire, South Wales. The branch line made a junction with the main line of the Taff Vale Railway at Stormstown, between Pontypridd and Abercynon. In fact the colliery development was limited, but the Lady Windsor Colliery became productive in 1886 and had a large output.