The name of the village occurs in a number of forms: Tonteg, Ton teg, Ton-teg and on some older maps as Ton-têg or Twyn-teg. Tonteg is now seen on the village sign, however some other signs say Ton-Teg. The name means "Beautiful hill" when translated from Welsh, deriving not from the Welsh for "wave" (ton) as might be thought, but rather from the word "twyn". [2] Indeed, a farm on the Black Road above the nearby Church Village is named Dan-y-twyn ("Beneath the hill"). It could also be related to the toponym ton as seen in Tonna.

The village has a fairly well preserved 12th-century motte castle with an intact moat called Tomen-Y-Clawdd [3] or Coed-Y-Twr. [4] To locals this fort situated in Ffordd Gerdinan is commonly known as the Monkey Tump

Tonteg Hospital is situated north of the village, now surrounded by housing estates. It was originally an isolation hospital treating contagious diseases. Nowadays it provides mental health care and other services. [5] No emergency services are provided.

Two main areas of local businesses exist along Main Road through the village and in the center of one of the housing estates (Cardigan Close area). Tonteg still has a post office.

Tonteg used to have at differing times two stations - both called Tonteg Halt railway station - on two former railway lines that ran nearby; Barry Railway and the Llantrisant and Taff Vale Junction Railway. After 1930 the original Tonteg Halt was moved to Tonteg Junction after track rationalisation; the name Tonteg Halt was used for this station.

The existence of the railways in the area around Power Station Hill has been obliterated by the Church Village bypass (described below), though some remnants exist between Tonteg and Treforest and to the south of the village towards Church Village.

There existed plans for a new station to be built on the remaining Pontypridd-Cardiff line between Treforest and Treforest Estate to serve the village, although its location would have been at the bottom of Power Station Hill and access to the village difficult.

Rhondda Cynon Taf, the local authority, has constructed a bypass to reduce traffic congestion on the A473, Pontypridd to Bridgend (Welsh : Penybont ar Ogwr) road, at Tonteg, Church Village (Welsh : Pentre'r Eglwys) and Llantwit Fardre (Welsh : Llanilltud Faerdref). The Church Village bypass, as it is known, is built as a single carriageway, with crawler and overtaking lanes around roundabouts and was completed in Autumn 2010. [8] [9]

Tonteg is represented on Rhondda Cynon Taf County Borough Council by two county councillors from the electoral ward of Tonteg. [10] The ward comprises the eastern strip of the Llantwit Fardre community, including the Tonteg village, Treforest Industrial Estate in the north and Gedrys Farm in the south. [11] A 2018 review of electoral arrangements, if accepted, would see a decrease in the number of councillors to one, effective from the 2022 council elections. [12]

Tonteg is also the name of a community ward for Llantwit Fardre Community Council, electing one of the twelve community councillors. [13] 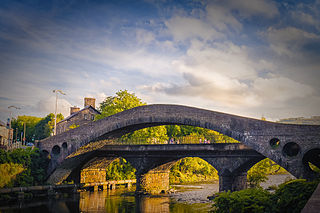 The River Taff is a river in Wales. It rises as two rivers in the Brecon Beacons; the Taf Fechan and the Taf Fawr before becoming one just north of Merthyr Tydfil. Its confluence with the River Severn estuary is in Cardiff.

Treforest is a village in the south-east of Pontypridd, in the county borough of Rhondda Cynon Taf, Wales. It is situated in the Treforest electoral ward, along with the village of Glyntaff, being part of the Pontypridd Community. Treforest runs along the west bank of the River Taff, while Glyntaff runs along its east bank.

Abercynon, is both a village and a community in the Cynon Valley within the unitary authority of Rhondda Cynon Taf, Wales. The community comprises the village and the districts of Carnetown and Grovers Field to the south, Navigation Park to the east, and Glancynon to the north.

Rhydyfelin is a large village and part of the community of Pontypridd, a town about two miles to its north west, in the county borough of Rhondda Cynon Taf. It is on the eastern bank of the River Taff close to the A470, and historically was in the parish of Eglwysilan.

Pontypridd is a constituency represented in the House of Commons of the UK Parliament since 2019 by Alex Davies-Jones of the Labour Party.

Taff's Well, is a semi-rural village, community and electoral ward located at the south easterly tip of Rhondda Cynon Taf, 6 miles (9.7 km) to the North of Cardiff, the capital city of Wales. Known locally as the 'Gates to the Valleys'. It is separated from Gwaelod Y Garth by the River Taff. Taff's Well is distinguished because it contains the only thermal spring in Wales. The tepid water is thought to rise along a fault-line from the Carboniferous Limestone, in somewhat similar manner to the warm springs at Bristol and Bath. Various religious groups regard it as a spiritual site. 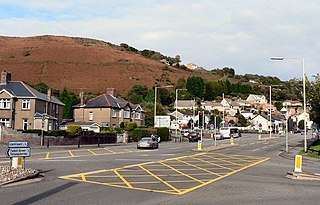 Upper Boat is a village on the southernmost outskirts of the town of Pontypridd, within the electoral ward of Hawthorn, Rhondda Cynon Taf, Wales, and comprises part of the Treforest Industrial Estate. Historically part of Glamorgan, it fell within the parish of Eglwysilan.

The A473 is a main road linking Pontypridd with Bridgend in Wales. 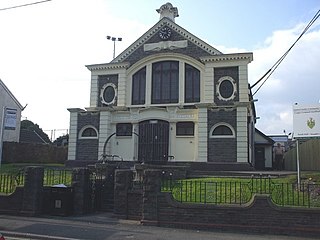 Church Village is a large village in the historic parish and community of Llantwit Fardre, located within the Taff Ely district of the County Borough of Rhondda Cynon Taf in Wales. The village is centrally located being around 4 miles from the local principal towns of Llantrisant to the southwest and Pontypridd to the north and is situated around 10 miles northwest of Cardiff city centre.

Tonteg Halt refers to two railway stations serving the township of Tonteg in Rhondda Cynon Taf, Wales. They were located on the Llantrisant and Taff Vale Junction Railway and latterly on the Barry Railway under the Great Western Railway.