The generic name, Aulostomus, is a composite of two Greek words: aulos, meaning flute, and stoma, meaning mouth, because the species appear to have tubular snouts. [4] "Flutemouth" is another less-common name for the members of the family (although this word is more often used to refer to closely related cornetfishes of the family Fistulariidae).

Trumpetfishes are found in tropical waters worldwide, with two species in the Atlantic and one in the Indo-Pacific. They are mostly demersal reef-dwellers, where one species seems to prefer rocky substrate.

They are relatively large for reef fish, where they reach almost 1 m in length. Bodies of trumpetfish are elongated, rigid, and pike-shaped. [6] Their dorsal and anal fins are closely adjacent to the tail, where individual dorsal spines reach midway towards the head region. Similar to most members of the order Syngnathiformes, the bodies of trumpetfish are inflexible, supported by interwoven struts of bone. A distinct trait of the family is their long, tubular snouts ending with somewhat nondescript jaws. Members of the family have the capability to expand their jaws quickly into a circular, gaping hole almost to the body's diameter when feeding.

Aulostomids are highly carnivorous fish. They stalk [6] their prey by hovering almost motionlessly a few inches above the substrate, inching their way towards unsuspecting prey. Once close enough, they rapidly dart in and expand their jaws rapidly. Opening their tube-like mouths in quick succession creates a strong suction force, which draws prey straight into the mouth. Aulostomids are known to feed almost exclusively on small, schooling reef fishes. [7]

While they have no commercial fisheries value, members of the family have been known to occasionally be found in the aquarium trade. Although not popular aquarium fish, they are common enough to have websites featuring instructions on keeping them in captivity. [8]

Currently, three species in this genus are recognized: [2]

The prowfish is a species of perciform marine fish found in the northern Pacific Ocean. It is the only extant member of the family, Zaproridae. Another species, Araeosteus rothi, is known from Late Miocene marine strata in Southern California.

The Gonostomatidae are a family of mesopelagic marine fish, commonly named bristlemouths, lightfishes, or anglemouths. It is a relatively small family, containing only eight known genera and 32 species. However, bristlemouths make up for their lack of diversity with numbers: Cyclothone, with 13 species, is thought to be the most abundant vertebrate genus in the world, numbering in the hundreds of trillions to quadrillions.

Aulostomus maculatus, the trumpetfish which is also known as the West Atlantic trumpetfish, is a long-bodied fish with an upturned mouth; it often swims vertically while trying to blend with vertical coral, such as sea rods, sea pens, and pipe sponges. 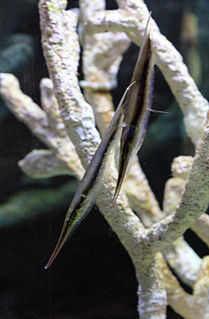 The Centriscidae are a family of fishes from the order Syngnathiformes which includes the snipefishes, shrimpfishes, and bellowfishes. A small family, consisting of only about a dozen marine species, they are of an unusual appearance, as reflected by their common names. The species in this family are restricted to relatively shallow, tropical parts of the Indo-Pacific.

The cornetfishes or flutemouths are a small family, the Fistulariidae, of extremely elongated fishes in the order Syngnathiformes. The family consists of a single genus, Fistularia, with four species, found worldwide in tropical and subtropical marine environments.

The striped boarfish, also known as whiskered boarfish, Japanese boarfish, sailfin armourhead or whiskered armorhead, is a species of marine ray-finned fish, an armourhead om the family Pentacerotidae, which is native to the Pacific Ocean from the Hawaiian Islands westward to the coast of Asia and Australia. This is a reef-dwelling fish found at depths between 18 and 193 m. It can reach a total length of 90 cm (35 in). It is currently the only known member of the genus Evistias. 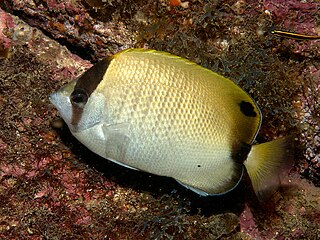 The pennant coralfish, also known as the longfin bannerfish, reef bannerfish or coachman, is a species of fish of the family Chaetodontidae, native to the Indo-Pacific area.

Aristochromis christyi is a species of fish in the family Cichlidae, which is endemic to Lake Malawi in Africa. It is the only known member of its genus.

Novaculichthys taeniourus, also known as the rockmover wrasse, carpet wrasse, dragon wrasse, bar-cheeked wrasse, olive-scribbled wrasse or reindeer wrasse, is a species of wrasse mainly found in coral reefs and lagoons in the Indo-Pacific region. These include habitats in the Gulf of California to Panama; tropical Pacific Ocean islands including Hawaii; the Philippines, Indonesia and Australia; and the Indian Ocean to the east coast of Africa. The common name, "rockmover wrasse", comes from their behavior of upending small stones and reef fragments in search of prey. This species is the only known member of its genus.

Kyphosus sectatrix, the Bermuda chub, Pacific drummer, beaked chub, grey drummer, Pacific chub or white chub, is a species of marine ray-finned fish, a sea chub from the family Kyphosidae. This species is found in tropical and subtropical coastal waters worldwide. It has had a confused taxonomic history dating back to Linnaeus's naming of the species in 1758.

The Chinese trumpetfish, Aulostomus chinensis, is a demersal marine fish belonging to the family Aulostomidae. 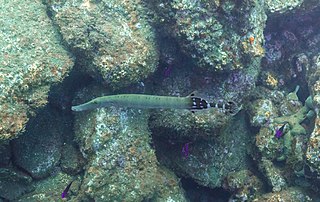 The Atlantic trumpetfish, Aulostomus strigosus is a species of trumpetfish in the family Aulostomidae. It is a tropical marine fish found in shallow coastal waters in the eastern Atlantic Ocean from Mauritania to Namibia. Like other trumpetfish, they eat mainly small fish and often shadow other piscivores while hunting.

Aeoliscus punctulatus, also known as the speckled shrimpfish or jointed razorfish, is a member of the family Centriscidae of the order Syngnathiformes. This fish adopts a head-down, tail-up position as an adaptation for hiding among sea urchin spines. This fish is found in coastal waters in the Indo-West Pacific. Its natural habitat includes beds of seagrass and coral reefs, where sea urchins are found. 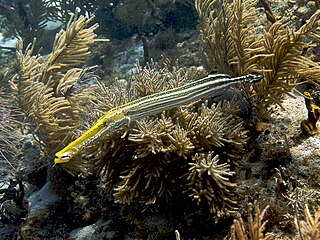 Aulostomoidei is a suborder of the order Syngnathiformes, which also contains groups such as the seahorses, pipefishes and dragonets. 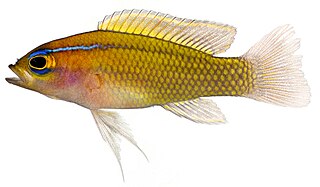 Lipogramma trilineata, the three-lined basslet, is a species of ray-finned fish from the family Grammatidae. It is found in the western Atlantic Ocean from the waters off southeastern Florida south through the Bahamas into the Gulf of Mexico and the Caribbean Sea as well as the coasts of Central and South America from Quintana Roo, Mexico to Nicaragua, and the seas off Cartagena and those off Venezuela at Curaçao and Bonaire. It occurs underneath rocky and coral ledges as well as occurring in deep reefs and on the outer wall at depths ranging from 22–69 metres (72–226 ft). Its range has been invaded by lionfish, an invasive species in the western Atlantic, which prey on a variety of fish species smaller than 15 centimetres (5.9 in) which means that both adults and juveniles L. trineata are likely prey of lionfish. It has been recorded that in the Bahamas, there has been a near two-thirds decline in the biomass of fish which lionfish prey on over a period of two years. Other species of basslet have been confirmed as prey for lionfishes.

The tubemouth is a species of ray-finned fish, a weed whiting from the family Odacidae. It is endemic to the southern coatsts of Australia where its is camouflaged to live among beds of seagrass.

Upeneus pori, Por's goatfish, is a species of marine ray-finned fish, a goatfish from the family Mullidae which is found in western Indian Ocean and the eastern Mediterranean Sea.