Year 533 ( DXXXIII ) was a common year starting on Saturday (link will display the full calendar) of the Julian calendar. At the time, it was known as the Year of the Consulship of Iustinianus without colleague (or, less frequently, year 1286 Ab urbe condita ). The denomination 533 for this year has been used since the early medieval period, when the Anno Domini calendar era became the prevalent method in Europe for naming years. 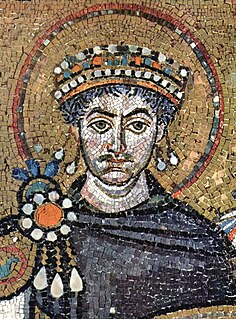 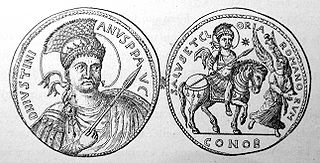 Year 534 (DXXXIV) was a common year starting on Sunday of the Julian calendar. At the time, it was known as the Year of the Consulship of Iustinianus and Paulinus. The denomination 534 for this year has been used since the early medieval period, when the Anno Domini calendar era became the prevalent method in Europe for naming years. 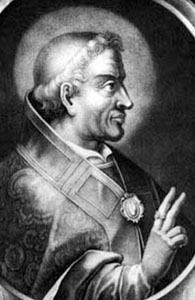 Year 536 was a leap year starting on Tuesday of the Julian calendar. At the time, it was known as the Year after the Consulship of Belisarius. The denomination 536 for this year has been used since the early medieval period, when the Anno Domini calendar era became the prevalent method in Europe for naming years. 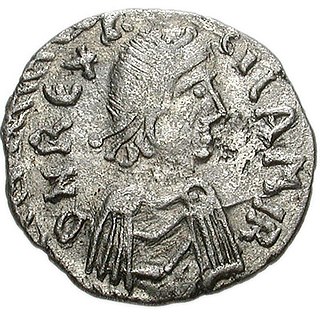 The Battle of Ad Decimum took place on September 13, 533 between the armies of the Vandals, commanded by King Gelimer, and the Byzantine Empire, under the command of General Belisarius. This event and events in the following year are sometimes jointly referred to as the Battle of Carthage, one of several battles to bear that name. The Byzantine victory marked the beginning of the end for the Vandals and began the reconquest of the west under the Emperor Justinian I.

The Vandals were a Roman-era Germanic people who first appear in written records inhabiting present-day southern Poland. Some later moved in large numbers, including most notably the group which successively established Vandal kingdoms in the Iberian Peninsula, on western Mediterranean islands and in North Africa in the 5th century.

The Battle of Tricamarum took place on December 15, 533 between the armies of the Byzantine Empire, under Belisarius, and the Vandal Kingdom, commanded by King Gelimer, and his brother Tzazon. It followed the Byzantine victory at the Battle of Ad Decimum, and eliminated the power of the Vandals for good, completing the "Reconquest" of North Africa under the Byzantine Emperor Justinian I. The main contemporary source for the battle is Procopius, De Bello Vandalico, which occupies Books III and IV of his magisterial Wars of Justinian. 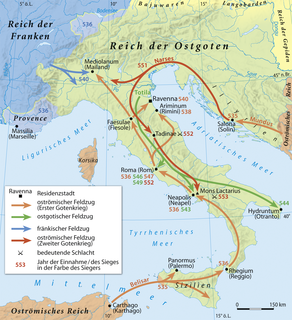 The Gothic War between the Byzantine Empire during the reign of Emperor Justinian I and the Ostrogothic Kingdom of Italy took place from 535 until 554 in the Italian peninsula, Dalmatia, Sardinia, Sicily and Corsica. It was one of the many Gothic Wars with the Roman Empire. The war had its roots in the ambition of the East Roman Emperor Justinian I to recover the provinces of the former Western Roman Empire, which the Romans had lost to invading barbarian tribes in the previous century.

Tzazo was the brother to King Gelimer (530–534), the last Vandal ruler of the North Africa. Tzazo died on 15 December 533 during the Battle of Tricamarum, which finally brought to an end the Vandal Kingdom in North Africa.

Pharas the Herulian was a sixth-century commander of Herulian forces loyal to Byzantium, who figures briefly in Procopius’ narrative of Justinian's wars. 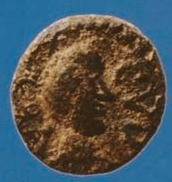 Godas was a Gothic nobleman of the Vandal kingdom in North Africa. King Gelimer of the Vandals made him governor of the Vandalic province of Sardinia, but Godas stopped forwarding the taxes he collected and declared himself ruler of Sardinia. 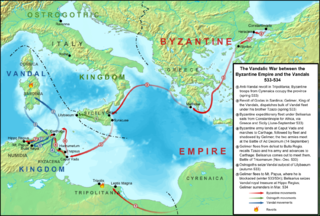 The Vandalic or Vandal War was a conflict fought in North Africa between the forces of the Byzantine, or East Roman, empire and the Vandalic Kingdom of Carthage, in 533–534. It was the first of Justinian I's wars of reconquest of the lost Western Roman Empire.

The praetorian prefecture of Africa was a major administrative division of the Eastern Roman Empire located in the Maghreb. With its seat centered at Carthage, it was established after the reconquest of northwestern Africa from the Vandals in 533–534 by the Byzantine Emperor Justinian I. It continued to exist until the late 580s, when it was replaced by the Exarchate of Africa.

John Troglita was a 6th-century Byzantine general. He participated in the Vandalic War and served in North Africa as a regional military governor during the years 533–538, before being sent east to the wars with the Sassanid Persians. As dux Mesopotamiae, Troglita distinguished himself in several battles, and was noticed by agents of the Byzantine emperor, Justinian I. In summer 546, Justinian chose John Troglita to assume overall command of Byzantine forces in Africa, where a succession of revolts by the indigenous Moorish tribes and within the imperial army itself had seriously reduced the Byzantine position. Troglita quickly secured an initial victory in the winter of 546/547 against the Moors of Byzacena, but was defeated in summer 547 by the tribes of Tripolitania, and Africa was once again laid open to destructive raids. Troglita reorganized his army and secured the assistance of some tribal leaders, and confronted and decisively defeated the tribal coalition at the Fields of Cato in summer 548. This victory spelled the end of the Moorish revolt, and heralded an era of peace for Africa. Troglita was also involved in the Gothic War, twice sending some of his troops to Italy to assist against the Ostrogoths. 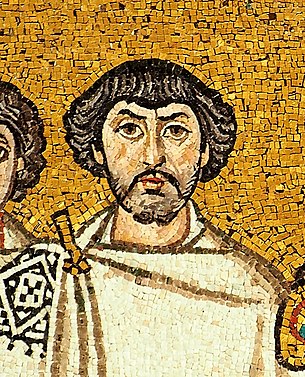 Flavius Belisarius was a military commander of the Byzantine Empire. He was instrumental in the reconquest of much of the Mediterranean territory belonging to the former Western Roman Empire, which had been lost less than a century prior.

John the Armenian was a Byzantine official and military leader. He was killed during the Vandalic War in 533.

Vandal Sardinia covers the history of Sardinia from the end of the long Roman domination in 456, when the island was conquered by the Vandals, a Germanic population settled in North Africa until its reconquest in 534.