The Balinese saka calendar is one of two calendars used on the Indonesian island of Bali. Unlike the 210-day pawukon calendar, it is based on the phases of the Moon, and is approximately the same length as the tropical year (solar year, Gregorian year).

Based on a lunar calendar, the saka year comprises twelve months, or sasih, of 30 days each. However, because the lunar cycle is slightly shorter than 30 days, and the lunar year has a length of 354 or 355 days, the calendar is adjusted to prevent it losing synchronization with the lunar or solar cycles. The months are adjusted by allocating two lunar days to one solar day every 9 weeks. This day is called ngunalatri, Sanskrit for "minus one night". To stop the Saka from deviating unduly from the solar year – as happens with the Islamic calendar  – an extra month, known as an intercalary month, is added after the 11th month (when it is known as Mala Jiyestha), or after the 12th month (Mala Sadha). The length of these months is calculated according to the normal 63-day cycle. An intercalary month is added whenever necessary to prevent the final day of the 7th month, known as Tilem Kapitu, from falling in the Gregorian month of December.[ citation needed ]

The names the twelve months are taken from a mixture of Old Balinese and Sanskrit words for 1 to 12, and are as follows: [1] [2]

Each month begins the day after a new moon and has 15 days of waxing moon until the full moon (Purnama), then 15 days of waning, ending on the new moon (Tilem). Both sets of days are numbered 1 to 15. The first day of the year is usually the day after the first new moon in March. [3] Note, however, that Nyepi falls on the first day of Kadasa, and that the years of the Saka era are counted from that date.[ citation needed ]

Year numbering in the calendar is 78 years behind the Gregorian calendar, and is calculated from (its "epoch" is) the beginning of the Saka Era in India. It is used alongside the 210-day Balinese pawukon calendar, and Balinese festivals can be calculated according to either year. The Indian saka calendar was used for royal decrees as early as the ninth century CE. [4] The same calendar was used in Java until Sultan Agung replaced it with the Javanese calendar in 1633. [5]

The Balinese Hindu festival of Nyepi, the day of silence, marks the start of the Saka year. Tilem Kepitu, the last day of the 7th month, is known as Siva Ratri, and is a night dedicated to the god Shiva. Devotees stay up all night and meditate. There are another 24 ceremonial days in the Saka year, usually celebrated at Purnama. [2] 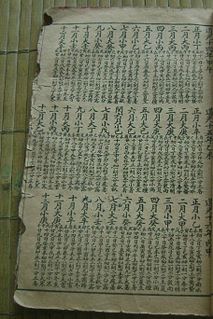 A month is a unit of time, used with calendars, that is approximately as long as a natural orbital period of the Moon; the words month and Moon are cognates. The traditional concept arose with the cycle of Moon phases; such lunar months ("lunations") are synodic months and last approximately 29.53 days. From excavated tally sticks, researchers have deduced that people counted days in relation to the Moon's phases as early as the Paleolithic age. Synodic months, based on the Moon's orbital period with respect to the Earth–Sun line, are still the basis of many calendars today, and are used to divide the year.

The Thai lunar calendar, or Tai calendar, is a lunisolar Buddhist calendar. It is used for calculating lunar-regulated holy days. Based on the SuriyaYatra, with likely influence from the traditional Hindu Surya Siddhanta, it has its own unique structure that does not require the Surya Siddhanta to calculate. Lunisolar calendars combine lunar and solar calendars for a nominal year of 12 months. An extra day or an extra 30-day month is intercalated at irregular intervals.

The Buddhist calendar is a set of lunisolar calendars primarily used in Cambodia, Laos, Myanmar, India, Sri Lanka, and Thailand as well as in Malaysia, Singapore and Vietnam by Chinese populations for religious or official occasions. While the calendars share a common lineage, they also have minor but important variations such as intercalation schedules, month names and numbering, use of cycles, etc. In Thailand, the name Buddhist Era is a year numbering system shared by the traditional Thai lunisolar calendar and by the Thai solar calendar. 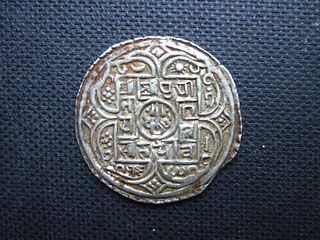 The Indian national calendar, sometimes called the Saka calendar, is used, alongside the Gregorian calendar, by The Gazette of India, in news broadcasts by All India Radio and in calendars and communications issued by the Government of India.

Vikram Samvat or Bikram Sambat and also known as the Vikrami calendar, is a historical calendar used in the Indian subcontinent. Vikram Samvat is generally 57 years ahead of Gregorian Calendar, except during January to April, when it is ahead by 56 years. Alongside Nepal Sambat, it is one of the two official calendars used in Nepal. In India, it is used in several states. The traditional Vikram Samvat calendar, as used in India, uses lunar months and solar sidereal years. The Nepali Bikram Sambat introduced in 1901 AD, also uses a solar sidereal year. 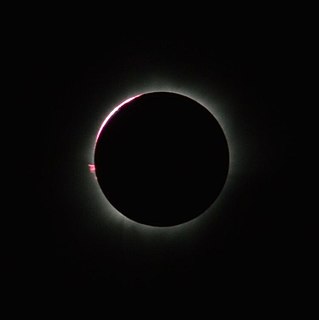 A total solar eclipse took place at the Moon's descending node of the orbit on March 8–9, 2016. If viewed from east of the International Date Line, the eclipse took place on March 8th (Tuesday) and elsewhere on March 9th (Wednesday). A total solar eclipse occurs when the Moon's apparent diameter is larger than the Sun's and the apparent path of the Sun and Moon intersect, blocking all direct sunlight and turning daylight into darkness; the sun appears to be black with a halo around it. Totality occurs in a narrow path across Earth's surface, with the partial solar eclipse visible over a surrounding region thousands of kilometres wide. The eclipse of March 8–9, 2016 had a magnitude of 1.0450 visible across an area of Pacific Ocean, which started in the Indian Ocean, and ended in the northern Pacific Ocean.

The Balinese observe two completely different and not synchronized calendars: