Atkins is a British multinational engineering, design, planning, architectural design, project management and consulting services company. It is a subsidiary of SNC-Lavalin and is headquartered in London.

The company was founded as WS Atkins & Partners by Sir William Atkins in 1938. It experienced rapid growth following the Second World War, performing specialist services in town planning, engineering sciences, architecture and project management. The firm was admitted to the London Stock Exchange in 1996, trading under the name WS Atkins plc for a time before rebranding as Atkins during 2002. While Atkins largely focused on the UK market during its formative years, it has grown into an international firm with a global presence, as well as expanded into a wide range of sectors, including aerospace and high speed railways.

By 2016, Atkins had become the UK's largest engineering consultancy, as well as the world's 11th largest global design firm. [2] It employed approximately 18,000 staff based in 300 offices across 29 countries and had undertaken projects in over 150 countries. The firm's motto is "Plan, Design, Enable". During July 2017, Atkins was acquired by SNC-Lavalin in a £2.1 billion deal. [3] [4]

The original company, WS Atkins & Partners, was established by William Atkins in 1938. [5] [6] The venture was not Atkin's only business endeavour, having acquired London Ferro-Concrete from his prior employers; he continued to actively manage both firms up until 1950. [7] In its formative years, the firm established its first offices in Westminster, London and specialised in civil and structural engineering design and consultancy work. [5] [6] Throughout the Second World War, the company developed a reputation for competently performing complex engineering works assigned to it despite the unavoidable wartime pressures and limitations that were imposed. Amongst other works, Akins developed a patented anti-aircraft turret during this period. [5]

In the aftermath of the conflict, the firm expanded rapidly to support the postwar reconstruction effort, supplying specialist services in town planning, engineering sciences, architecture and project management. [7] [6] During 1945, Atkins was invited to consult on the planned expansion of the Port Talbot Steelworks and subsequently acted as the civil and structural design engineer for the project. In 1950, Atkins opted to discontinue contracting work to concentrate on design engineering and project management work. [5] During the 1950s, the firm became involved in the engineering of the Berkeley Nuclear Power Station, which became the first exclusively civilian nuclear power station in the UK upon its completion; the company continued to be active in the nuclear sector both domestically and abroad. [5] In the 1960s, Atkins provided tunneling designed for the fledgling Toronto subway network. During the 1970s, the company supported the construction of Drax Power Station, the largest power generation facility in the UK. [5]

Up until 1982, the year in which he retired, William Akins served as the company's chairman. [5] [6] In 1996, WS Atkins was admitted to the London Stock Exchange and began trading as WS Atkins plc. That same year, it also acquired Faithful+Gould, a cost and project management consultancy firm. [8] Throughout the 1980s and early 1990s, Atkins played a key role in the engineering of the Channel Tunnel; completed in 1994, it possesses the longest underwater section of any tunnel in the world. [9] [5] During the late 1990s, WS Atkins performed work on the Burj al Arab hotel, which was completed in 1999. [10]

In 2002, the company begun trading under the Atkins name. That same year, it also bought Hanscomb, construction consultants. [11] During the early 2000s, the company experienced a period financial difficulties, resulting in the share price falling to 50p in 2002 [12] and the company's Chief Executive, Robin Southwell, resigning along with Finance Director Ric Piper, who was also told his new job at Trinity Mirror was no longer open to him. [13] Keith Clarke replaced him, joining from Skanska. [14]

Atkins was one of the five shareholders in Metronet, the London Underground maintenance company that failed in 2007, after which Atkins was forced to write off its investment in the venture. [15] During 2009, Atkins was selected as the official engineering design services provider for the 2012 Summer Olympics; the company provided building services design, civil engineering and structural engineering, acoustics, fire protection engineering, and accessibility services. [16] [17]

As a consequence of the general economic downturn experienced during the Great Recession, Atkins reduced its headcount as a cost-saving measure; approximately 3000 staff left the business between April 2009 and February 2011, although the overall headcount remained relatively stable following the acquisition of the American company PBS&J during August 2010. [18] [19] The purchase of PBS&J, a Florida-based provider of engineering, planning, architecture, construction, environmental, and program management services, was viewed as a major buy into the North American market for Atkins. [20]

Although Atkins had not traditionally involved itself in the aerospace sector, the firm decided to build up its presence in the market, quickly forming links with British aero engine manufacturer Rolls-Royce Holdings and the multinational aerospace firm Airbus. [17] [21] Its first major aerospace project was to perform a stress-check analysis of the wing proposed for the Airbus A380 airliner, later expanding to perform work on the wings of the Airbus A320 and Airbus A350 XWB airliners as well as the Airbus A400M Atlas military airlifter. Atkins was reportedly keen to expand within the North American region, particularly with Boeing and its supply chain. [17] By 2011, roughly 500 staff around the globe were working in the aerospace sector; Atkins divisional managing director Neil Kirk noted the firm's plans to expand and double turnover from this sector over the following three to four years. [17]

Atkins has also been highly active in the engineering of high speed railways. [22] The company's own analysis noted that Europe's high speed rail network was expected to expand three-fold between 2008 and 2020, while passenger rail travel in the UK was growing far faster than official forecasts had predicted. [23] In 2001, the UK's Strategic Rail Authority commissioned Atkins to produce a feasibility study into the business case for, and the transportation impact of, high-speed railways. [24] During January 2011, an Atkins-led consortium was selected to engineer a 180 km high speed line between the Danish capital of Copenhagen and the German border. [25] In April 2019, the company was appointed to plan Sweden's first high speed main line. [26]

In June 2011, Atkins announced it was buying the oil and gas business of Finnish global consulting firm Pöyry for €17.25 million; as a result of this acquisition, around 130 staff from Pöyry's Perth, Stavanger and Aberdeen offices integrated into Atkins' Energy business unit. [27] During October 2014, Houston-based oil and gas offshore engineering business Houston Offshore Engineering was acquired for £45 million, added another 150 people to the business and increased the headcount of oil and gas specialists to over 1,000 within its operations worldwide. [28] That same year, Atkins had made a bid to purchase Parsons Brinckerhoff from Balfour Beatty, but were outbid by WSP Global. [29] In April 2016, the company announced the acquisition of the Projects, Products and Technology (PP&T) segment of EnergySolutions for £206 million, strengthening Atkins' nuclear multidisciplinary capability to a 2,000-strong global team. [30]

During April 2017, Atkins received a £2.1bn bid from Canadian company SNC-Lavalin. On 21 April, it was announced that the takeover deal had been agreed; [31] the move was approved by shareholders in June 2017. This step coincided with news of 92 redundancies in the company's infrastructure division. [32] The deal was completed on 3 July 2017, with Atkins becoming SNC-Lavalin's fifth business sector. [33] Atkins was delisted from the London Stock Exchange with effect from 4 July 2017. [34]

During the COVID-19 pandemic in the United Kingdom, Atkins announced it was cutting around 280 jobs from its UK infrastructure division, blaming "unprecedented uncertainty" in the sector from which it did not expect to see a bounce back "in the short to medium term." [35]

Atkins' notable past and current projects include:

Atomic Energy of Canada Limited (AECL) is a Canadian federal Crown corporation and Canada's largest nuclear science and technology laboratory. AECL developed the CANDU reactor technology starting in the 1950s, and in October 2011 licensed this technology to Candu Energy.

SNC-Lavalin Rail & Transit is an international rail consultancy company headquartered in Derby, England. It was founded in 1994. In October 2011 the company was acquired by SNC-Lavalin. In January 2016 the company was renamed when it became integrated under the main SNC-Lavalin brand.

The SNC-Lavalin Kerala hydroelectric scandal is a financial scandal related to a hydroelectric infrastructure contract between the Kerala Government and the Canadian company SNC-Lavalin in 1995 which resulted in an alleged net loss to the Indian exchequer of 3,745,000,000 rupees.

Hatch is a global multidisciplinary management, engineering and development consultancy. Its group companies have more than 9,000 staff in 70+ offices. In 2015, Hatch was ranked as a top 20 International Design Firm according to the Engineering News-Record (ENR) rankings. 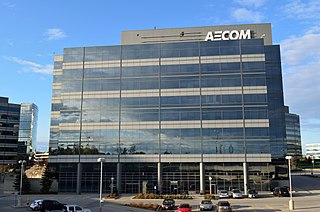 HDR, Inc. is an employee-owned design firm, specializing in engineering, architecture, environmental, and construction services. HDR has worked on projects in all 50 U.S. states and in 60 countries, including notable projects such as the Hoover Dam Bypass, Fort Belvoir Community Hospital, and Roslin Institute building. The firm employs over 11,000 professionals and represents hundreds of disciplines in various markets. HDR is the 10th largest employee-owned company in the United States with revenues of $2.5 billion in 2021. Engineering News-Record ranked HDR as the 5th largest design firm in the United States in 2022.

Daher, or DAHER, is a French industrial conglomerate. It is operational across the aerospace, defence, nuclear, and automotive industrial sectors in the fields of manufacturing, services, and transport.

Obrascón Huarte Lain, S.A. ; branded as OHLA Progress Enablers since July 2021, is a Spanish multinational construction and civil engineering company. The company is involved in infrastructure and commercial property construction, homebuilding and the operation of toll road and other transport concessions. In the latter, the group is particularly active in Mexico with Aleatica. OHLA also has a majority-owned American subsidiary called OHL USA which is based in College Point, New York.

Lavalin was a Canadian civil engineering and construction firm based in Montreal, Quebec. After a major expansion program in the 1980s that led to financial difficulties, in 1991 Lavalin merged with its long-time competitor, Surveyer, Nenniger & Chenevert Consulting Engineers (SNC), to become today's SNC-Lavalin, forming one of the ten largest engineering firms in the world.

Egis is an international company active in the consulting, construction engineering and mobility service sectors that design and operate intelligent infrastructure and buildings. Egis operates in 120 countries and has 16,200 employees.

The Commission of Inquiry on the Awarding and Management of Public Contracts in the Construction Industry was a public inquiry in Quebec, Canada into potential corruption in the management of public construction contracts.

SNC-Lavalin Group Inc. is a Canadian company based in Montreal that provides engineering, procurement, and construction (EPC) services to various industries, including mining and metallurgy, oil and gas, environment and water, infrastructure, and clean power. SNC-Lavalin is the largest construction company, by revenue, in Canada, as of 2018.

Robert Gordon Card is an American businessman, engineer, and former government employee who served as the CEO of SNC-Lavalin, Canada's largest engineering and construction firm.

Uwe Krüger is a Swiss-German businessman and physicist. Krueger serves as Head of the Industrials, Business Services and Energy & Resources Investment Group, as well as the Head of the Portfolio Management Group at Temasek International in Singapore. He holds the position of Senior Managing Director at Temasek. Temasek is a leading globally diversified investment company headquartered in Singapore with a net portfolio of $275 billion. From June 2011 to July 2017 he was CEO of WS Atkins plc. The company was acquired by SNC-Lavalin and delisted from the London Stock Exchange effective July 2017.

Wikimedia Commons has media related to Atkins (company) .
This page is based on this Wikipedia article
Text is available under the CC BY-SA 4.0 license; additional terms may apply.
Images, videos and audio are available under their respective licenses.