The chain cent was America's first large cent and the first circulating coin officially produced by the United States Mint. [1] It was struck only during 1793. [2] [3]

It was not the first circulating coin produced by the United States, which was the Fugio cent of 1787 (also known as the Franklin cent), based on the Continental dollar. As with the Fugio cent, the Chain cent was made of copper and featured a chain symbolizing the linking together of the states of the United States.

The obverse design consisted of a stylized Liberty head with flowing hair. The inscription "LIBERTY" appeared above the portrait, and the date below. The design was rather sparse and empty compared to those that would come later.

The reverse's central design figure, for which the coin is named, is an interlocking chain with 15 links, representing the 15 American states in existence at that time. Both the words "ONE CENT" and the fraction "1/100" appear within the chain. Along the outer edge is inscribed "UNITED STATES OF AMERICA". On the first working die, the engraver failed to allow adequate room for the entire inscription, and it had to be abbreviated to "UNITED STATES OF AMERI.". These early dies were cut by hand, rather than being made from master hubs as is the practice today.

The edge of these coins is decorated with bars and vines with leaves.

Chain cents were struck during late February and early March 1793; records indicate that approximately 36,103 were produced. However, the public reaction to the coins was largely unfavorable. One newspaper criticized the appearance of the Liberty head, saying that it appeared to be "in a fright". And, while the reverse chain had been intended to symbolize the unity of the newly formed Union (similar iconography had been utilized on the reverse of the earlier Fugio Cent and Revolutionary War era Continental currency), many commentators instead interpreted it as representative of slavery. By March, the Mint had run out of planchets, which temporarily halted striking. During this time, a new design – the Wreath cent – was quickly prepared and approved.

As a one-year only type coin and the first business strike cent, the Chain cent has always been in demand, both by collectors of large cents, as well as type collectors. [4] Struck for about two weeks from late February until early March 1793, only about 1,000 coins are known to exist today, and even coins in the lowest grades still sell for thousands of dollars. [5]

The half dollar, sometimes referred to as the half for short or 50-cent piece, is a United States coin worth 50 cents, or one half of a dollar. It is the largest United States circulating coin currently produced in both size and weight, being 1.205 inches (30.61 mm) in diameter and .085 inches (2.15 mm) in thickness, and is twice the weight of the quarter. The coin's design has undergone a number of changes throughout its history. Since 1964, the half dollar depicts the profile of President John F. Kennedy on the obverse and the Seal of the President of the United States on the reverse.

The dollar coin is a United States coin with a face value of one United States dollar. It is the second largest U.S. coin currently minted for circulation in terms of physical size, with a diameter of 1.043 inches (26.5 mm) and a thickness of .079 inches (2 mm), coming second to the half dollar. Dollar coins have been minted in the United States in gold, silver, and base metal versions. Dollar coins were first minted in the United States in 1794. The term silver dollar is often used for any large white metal coin issued by the United States with a face value of one dollar, whether or not it contains some of that metal. While true gold dollars are no longer minted, the Sacagawea, Presidential, and American Innovation dollars are sometimes referred to as golden dollars because of their color. 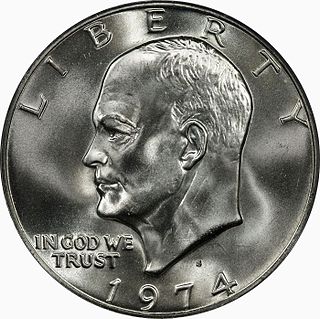 The Eisenhower dollar was a one-dollar coin issued by the United States Mint from 1971 to 1978; it was the first coin of that denomination issued by the Mint since the Peace dollar series ended in 1935. The coin depicts President Dwight D. Eisenhower on the obverse, and a stylized image honoring the 1969 Apollo 11 Moon mission on the reverse, with both sides designed by Frank Gasparro.

The Sacagawea dollar is a United States dollar coin first minted in 2000, although not minted for general circulation from 2002 to 2008 and again from 2012 onward due to its general unpopularity with the public and low business demand for the coin. These coins have a copper core clad by manganese brass, giving them a distinctive golden color. The coin features an obverse by Glenna Goodacre. From 2000 to 2008, the reverse featured an eagle design by Thomas D. Rogers. Since 2009, the reverse of the Sacagawea dollar has been changed yearly, with each design in the series depicting a different aspect of Native American cultures. These coins are marketed as "Native American dollars". 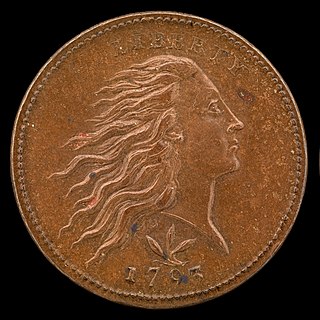 The silver center cent is an American pattern coin, one of the precursors to the large cent and an early example of a bimetallic coin. Less than a dozen specimens are known to exist today, and they generally fetch substantial prices; an uncirculated silver center cent sold at auction for $414,000 in January 2002. That price was eclipsed by an example graded PCGS MS61 offered at auction in April 2012, with a price tag of more than $1 million. 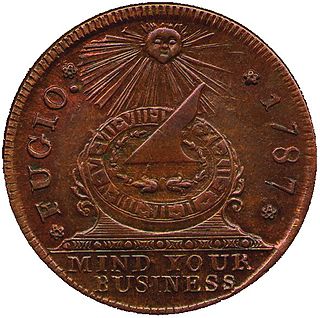 The Fugio cent, also known as the Franklin cent, is the first official circulation coin of United States. Consisting of 0.36 oz of copper, it was designed by Benjamin Franklin and minted only in 1787. Its design is very similar to a 1776 Continental Currency dollar coin that was produced in pattern pieces as potential Continental currency but was never circulated. 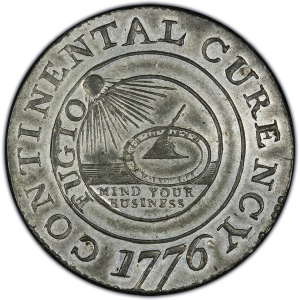